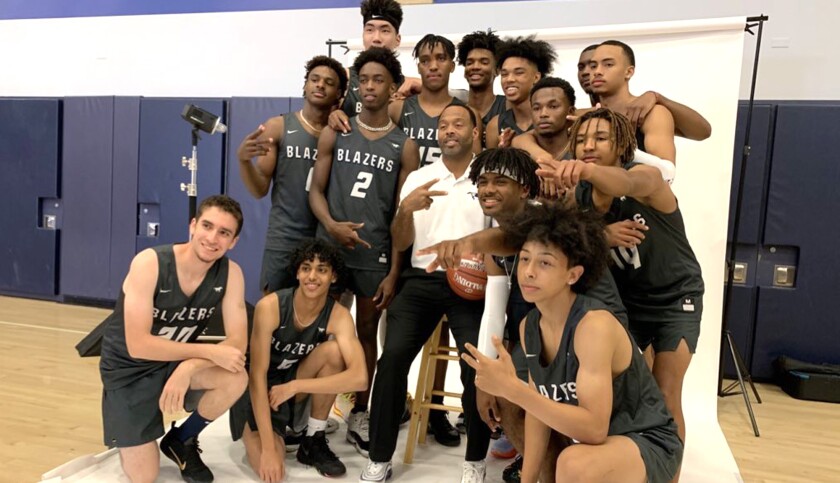 Classic at Damien: Sierra Canyon holds off Etiwanda to advance to championship game

Etiwanda has been known as “clamp city” for years because of the way the team plays man-to-man defense under coach Dave Kleckner. The Eagles put their skill on display before a packed gym on Saturday night against No. 1 Sierra Canyon in the semifinals of the Platinum division of the Classic at Damien.

From the beginning, Etiwanda (11-2) gave Sierra Canyon (14-0) all it could handle, but in the end, the Trailblazers got clutch plays from Shy Odom to pull out a 57-53 victory and advance to Monday’s championship game. Odom’s basket in the final minute put the Trailblazers ahead and he added a free throw with 17 seconds left. The Eagles twice had opportunities go ahead but missed shots. BJ Boston clinched the victory with two free throws. He finished with 31 points.

Sierra Canyon trailed 31-30 at halftime, but one very important quality shown by the Trailblazers in the opening month is performing well in the second half after making adjustments. They opened a 39-31 lead in the third quarter. Sierra Canyon will be getting a big addition on Monday. Ziaire Williams, the former Sherman Oaks Notre Dame standout, will become eligible. The Trailblazers will face the winner of St. John Bosco-Rancho Christian at 8:30 p.m. at Damien.

Washington Prep (9-8) advanced to the Gold division championship game by defeating unbeaten Rolling Hills Prep 52-47 in overtime. DeShawn Johnson led the way with 16 points. The General have played the toughest schedule of any City Section team and continue to hang tough. Brandon Burks made a free throw with 2.7 seconds left for Washington to send the game into overtime. Washington Prep will play Santa Clarita Christian, a 67-55 winner over Chaminade.

Dylan Andrews was 10 of 10 from the free-throw line and finished with 20 points in Windward’s 73-70 win over Damien. Kijani Wright added 16 points,.

Barry Wilds scored 16 points to help Fairfax reach the consolation final in the Platinum division with a 70-69 win over Dublin.

In Oregon, Santa Ana Mater Dei advanced to the tourney final with a 63-45 win over Norcross. Devin Askew had 23 points.

JSerra received 32 points from Ian Martinez in a 63-57 win over Desert Vista.

Crespi advanced to the championship game of the Orange tournament with a 54-39 win over Warren. Mike Price and Robert Power each scored 17 points.

Loyola won the Sand Dune Classic behind tournament MVP Colby Brooks, who scored 15 points in a 59-58 win over St. Ignatius.

Mission Viejo defeated Tesoro 60-55 in the semifinals of the Tustin tournament.

Jake Hlywiak finished with 30 points in Valencia’s 84-70 win over Colony.

Moorpark received 27 points from Troy Anderson in a 65-42 win over Alta Loma.