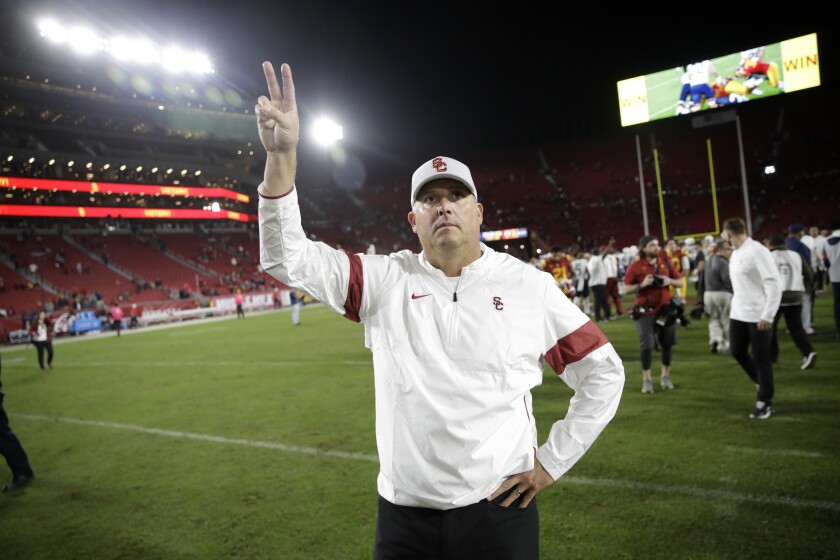 So this past spring, Helton and the rest of his Trojans staff made more of a point to develop where they could, offering up extra repetitions and extra attention. Through fall camp, they rotated as many young players as possible in hopes that the experience might one day prove worth it.

That moment came fast and furious for USC’s defense Saturday night at the Coliseum as a ragtag unit down two cornerbacks, two defensive ends and two linebackers came together for a phenomenal fill-in performance in a 41-14 victory over Arizona. The same was true on the other side of the ball, where USC turned successfully to its fifth-string running back, Kenan Christon, to speed past the Wildcats.

That might not be a strategy built for the long term, but for now the statuses of injured safety Talanoa Hufanga, defensive end Drake Jackson, wide receiver Munir McClain, linebacker Abdul Malik-McClain, and running backs Stephen Carr and Markese Stepp remain uncertain. Helton said he will offer a full update Monday, when USC has a complete set of MRI exam results from the many who were injured Saturday.

For one more day, Helton wanted to praise those who stepped up in their place — and the coaches who helped get them there.

“Thank goodness you’ve trained the next guy to be ready for that job,” Helton said. “I told our staff today: It’s a great lesson for us all. Always remember to coach each and every person on your team as hard as you can and lift them up to be the best player they can possibly be.”

A few of those replacements might have to fill in for the foreseeable future. Jackson was carted off the field with an ankle injury against Arizona, and on Sunday, his stepmother tweeted that he was “on the road to recovery now.”

“Everything happens for a reason,” Kristin Jackson tweeted. “He is in Gods hands.”

Hufanga, who has suffered two collarbone breaks in the past year, left Saturday’s game in a sling. The sophomore safety leads the Trojans in tackles per game, while Jackson, a standout freshman, has the most sacks (3½).

Helton said Saturday night that he hoped to have at least one running back return when USC (4-3, 3-1 Pac-12) faces Colorado (3-4, 1-3) on Friday night in search of its first road win this season. That back is more likely to be Carr, who called his hamstring injury “just a tweak” after the game.

Regardless, Christon showed enough that he’s expected to have a role going forward. The freshman speedster is able to play in three more games while still retaining his ability to redshirt. Unless USC finds itself desperate down the stretch or the freshman forces his way into the rotation ahead of Stepp or Carr, Christon is likely to sit out at least two more games.

On Sunday, Helton was still stunned by how far the Trojans had to reach down the depth chart at running back. But Christon’s stunning two-touchdown performance begged the question: Why hadn’t USC seen his potential before now?

“You never know until you throw them out there to see what they are,” Helton said. “Last night, you saw a true freshman walk out there and explode. We’ve seen it on tape as a high school player, and I’m just glad he got the opportunity to go out there and he made the most of it and he was prepared to make the most of it. We’re fortunate to have a bunch of good players here, and thank goodness for right now. We need them because of the injuries.”

Injuries aside, one of those replacements guaranteed himself a larger role moving forward. Kana’i Mauga — who had 13 tackles, a sack, an interception and a forced fumble against Arizona — is expected to rotate at linebacker, even after Palaie Gaoteote returns from a high ankle sprain that held him out of Saturday’s win.

“We always say put your resume on tape,” Helton said, “and [Mauga] produced a great resume.”