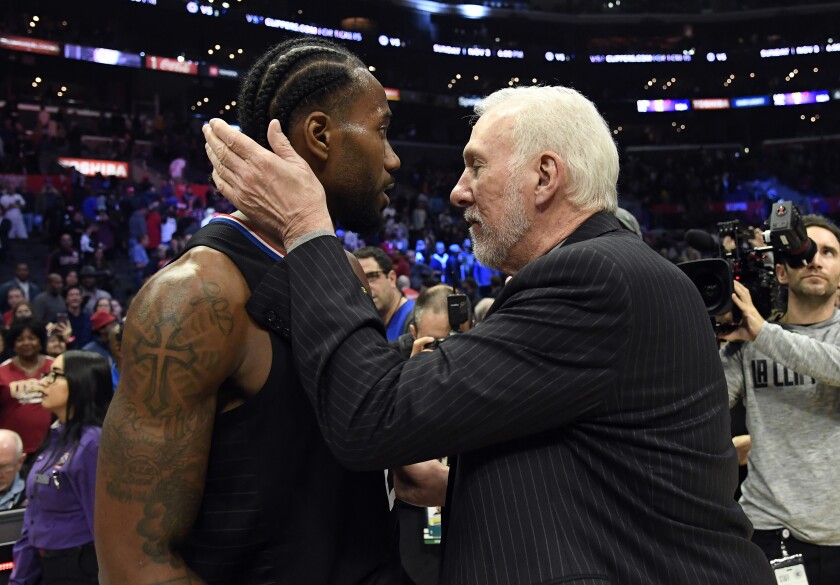 Kawhi Leonard put a hand on Gregg Popovich’s shoulder as they spoke. Popovich pointed at the court as if he was still coaching a player who hasn’t suited up for him in almost two years. The coach patted Leonard on the back of the neck. Then they parted ways.

“Our relationship is good, for the most part,” Leonard said of the coach who launched the two-time NBA champion’s career.

It is so good that the Clippers star, in his signature understated tone, admitted after a 103-97 win over the Spurs on Thursday that he always looks forward to matchups against his former team and coach. The forward showed just how far removed he is from his first days as a Spur, displaying the all-around game that’s made him a three-time All-Star with 38 points, 12 rebounds, four steals and one assist.

As most of his teammates slogged through the malaise of playing the second game on back-to-back nights, a well-rested Leonard, who didn’t travel for the team’s 110-96 loss to the Jazz on Wednesday, opened fire early and often. He took 32 shots, his career high for a regular-season game.

“It looked like he was pretty incentivized,” Clippers guard Lou Williams said of Leonard going against his former team. “Damn sure felt like it, so I’m glad to have him on a night like this where I’ve been on the other side of those where some guys come back and play teams that I’ve played with them on and they scorch the team.”

“Just keep being aggressive,” Leonard said, “shots are going to fall. You’re going to miss and make shots, but knock down the important ones.”

Leonard made seven of nine shots in the fourth quarter as the Clippers (4-2) held off a late rally by the Spurs (3-1), who were held under 100 points for the first time in the young season.

“We have scorers and talent and shooters to play well on the offensive end,” Leonard said, “but I think if we want to get to the level that we want to get to, it’s about us putting on that defensive hat and coming out there and shut down anybody that’s in front of us.”

The 28-year-old learned the defensive gospel immediately with the Spurs. His first instructions from Popovich were to become an all-league defender. He was the NBA’s defensive player of the year by his fourth season. Then an All-Star the following season. He reunited with his former coach Thursday as a two-time NBA champion and Finals MVP.

The development still seems to baffle the man who started it all.

“When we made that trade and drafted for him, we didn’t know he was going to be Kawhi Leonard,” Popovich said. “People who tell you that are full of crap.”