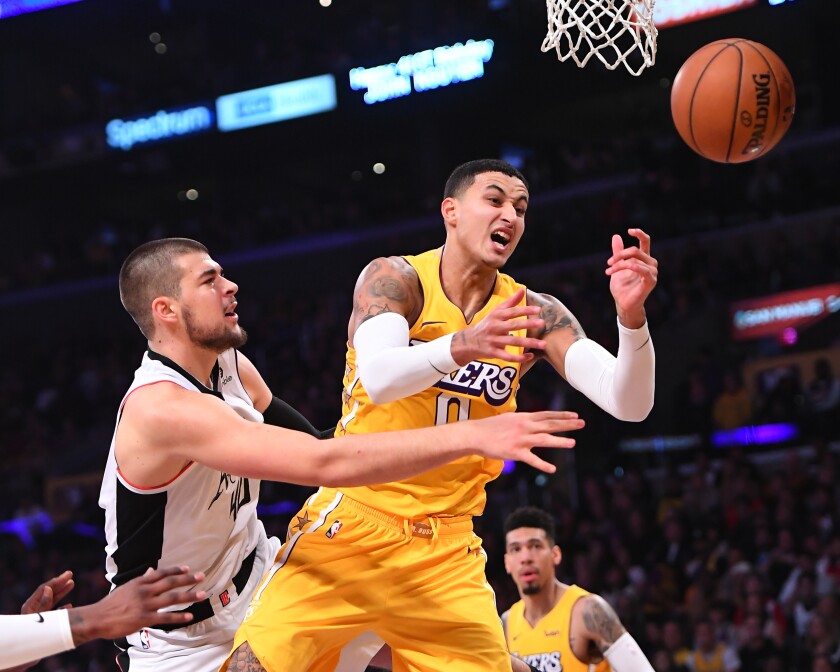 Their lockers at Staples Center are next to each other, allowing Beverley to become a mentor. The 6-foot-1 guard from Chicago is always demanding that Zubac be well prepared for that night’s opponent, pushing the 7-foot center from Croatia to maximize his potential.

“He’s been phenomenal all year,” Beverley said of Zubac after the Clippers practiced Friday. “I kind of made an emphasis to kind of stay on him even when he’s playing well. But he’s been protecting the rim. The minutes that he’s been playing, he’s been making the most out of it. He’s here working on his game. He’s always in the weight room.

The 22-year-old Zubac, who is averaging 8.3 points and 6.4 rebounds in 17 minutes per game, has been a willing listener.

“It’s great. He keeps me focused all the time,” the former Laker said about Beverley. “Every time I try in the locker room, when I say something outside of basketball, he will be like, ‘C’mon Zu, we got to focus. We got a game.’ He’s always on me and I love it. A guy that is always locked in. He don’t care about anything else in the pregame and that stuff. When you got a guy like that, you got to return the energy, can’t be messing around and doing other stuff. You got to be locked in.”

Zubac’s size and ability to get to the basket on pick-and-roll plays has been beneficial to what the Clippers seek to do on offense.

He has good hands and has been adept at finishing around the basket.

So when the Clippers face a team like the Utah Jazz on Saturday at Staples Center, Zubac’s height and offensive skills might be able to keep 7-1 center Rudy Gobert, a two-time defensive player of the year, occupied.

“First of all, shooting is beneficial against the length. That’s really important,” coach Doc Rivers said. “Because the more you can get, the more you can have. But Zu’s been phenomenal against it. He’s handled all the size they’ve put against him. He’s still rolling, he’s still scoring and that’s still beneficial to us.”

In a 111-106 victory over the Lakers on Christmas Day, Zubac’s 11 points and eight rebounds were helpful in keeping rival centers JaVale McGee and Dwight Howard from protecting the key.

“They’re caught, you know? You’ve got Kawhi [Leonard] coming off the pick,” Rivers said. “That’s what happened the other night. They obviously told Dwight and those guys to get up, but then you got Zu rolling and there’s nobody back there to stop Zu. So the fact that he does it every time is good for us.”