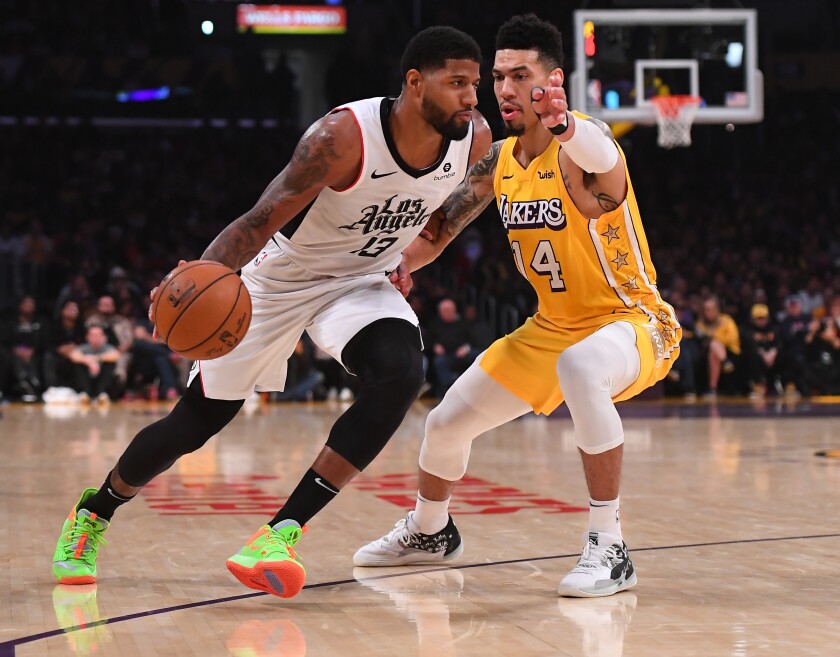 A strained left hamstring sustained by Paul George during practice Wednesday will keep the Clippers forward out of not only Friday’s home game against Golden State but Sunday in Denver, the team said.

George will not travel to Denver and the injury, which coach Doc Rivers termed “mild,” will be re-evaluated early next week.

The injury is an aggravation of the tightness George first felt in the hamstring Jan. 2 against Detroit and caused him to sit out two days later against Memphis. George returned Sunday against the Knicks and left the game feeling fine, Rivers said. While playing defense Wednesday during practice, George “felt something and he walked over to me and said, ‘I think I feel something in my hamstring,’” Rivers said.

“When he went down I started to think about Allen Iverson immediately like, ‘Why did we practice?’ But it’s a mild hamstring injury and he’ll be back. We’ll keep evaluating him and he’ll be back soon, I think, so you know, it is what it is at this point.”

The injury will keep the Clippers from fielding a healthy roster against the Warriors, which would have been only the second time this season. Rivers called that frustrating, given the team had four days between games — its longest such stretch off so far this season — in which they expected to get healthy.

“When [George] told me it was a hamstring I just thought go get it checked, I actually thought I’d see him the next day and then I realized it was a real hamstring [injury],” Rivers said. “You get disappointed for about five minutes and then you get over it. This happens to teams, and it shouldn’t be an excuse not to keep getting better.

“Does it hurt us in ways that you probably can’t see? Yeah it does, but we’ll figure it out. I have no doubt about that.”