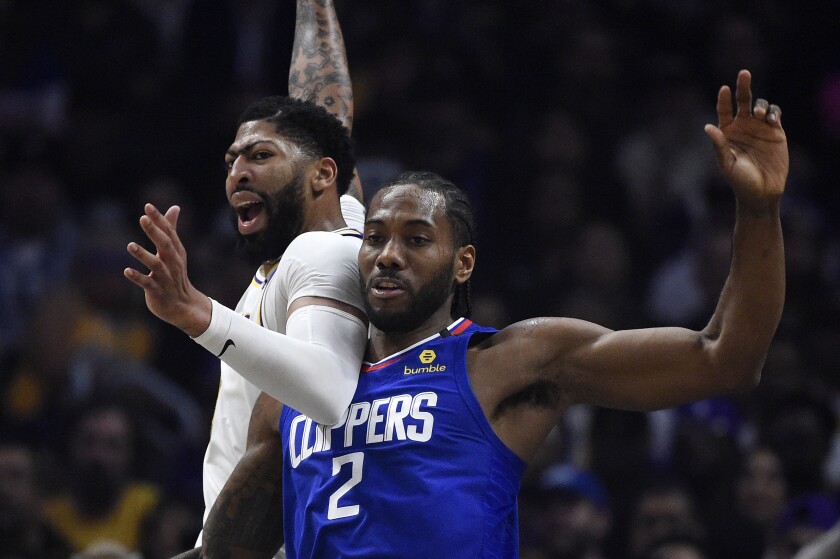 After a four-month disruption to the NBA schedule because of the novel coronavirus, the Clippers will resume their season July 30 the same way they began it back in October — by facing the Lakers.

The matchup, which the NBA revealed Friday, will be the first of eight “seeding games” played by the Clippers over two weeks at ESPN’s Wide World of Sports Complex near Orlando, Fla., before the start of the postseason.

The schedule will require the Clippers to play on consecutive days just once — on Aug. 8, at 10 a.m. PDT and the following day at 6 p.m. PDT. Kawhi Leonard, the team’s leading scorer, has not played on consecutive days since the 2017 season, a streak that continued this season as he nursed what the league has cited as an ongoing injury to a tendon in his left knee.

The Clippers were 13-5 against those eight opponents this season, a record that does not include Brooklyn, whom the Clippers had yet to play.

The Clippers will play their first seven games at either the Arena, the complex’s largest venue, or the HP Field House, a slightly smaller facility. The time and arena for their final seeding game are undetermined. Prime Ticket will broadcast all eight seeding games.

The Clippers last played March 10 and will restart the season with a 44-20 record that is second in the Western Conference to the Lakers (49-14). Veteran guard Lou Williams, the team’s third-leading scorer, is still deciding whether to participate in the season restart out of concerns it could distract from the social justice movement ignited nationwide following the death of George Floyd.

(All times PDT and p.m., unless noted)