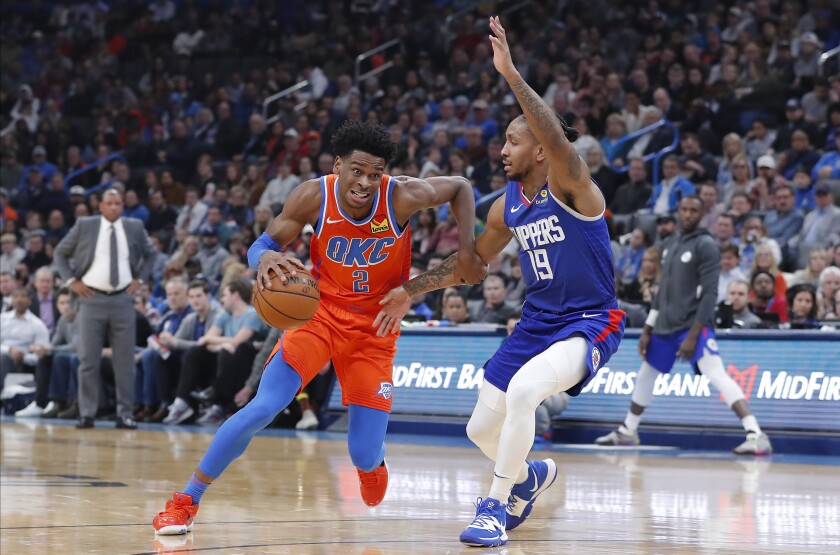 For nearly two decades, Marvin Mack has stood in a Chesapeake Energy Arena hallway, just outside the double doors that lead to the visitors’ locker room. In what has become one of the NBA’s most hostile venues, Mack’s placement, and longevity, has made the security guard a friendly, dependable presence.

Briefcase in hand, Clippers coach Doc Rivers stopped to chat Sunday afternoon. Kawhi Leonard did too. But Mack’s biggest smile came more than two hours before tipoff, when he saw the star forward who used to occupy the home locker room.

Paul George leaned in, hugged the gray-bearded Mack and exchanged pleasantries. The Clippers forward had been unsure how he would be received Sunday, playing in Oklahoma City for the first time since he asked out via trade in July after spending two seasons with the Thunder. Yet, as the night went on, it was clear the moment with Mack was no outlier.

Cheered by a standing ovation during his pregame introduction, George was embraced warmly by the crowd. Later, he stopped to hug Clay Bennett, the Thunder owner. He was never booed.

“It was great,” George said. “It just made me feel appreciated.”

That did not mean that George and the Clippers left the arena happy. Not after scoring 18 points in a 118-112 defeat that was another reminder of the frailty of the team’s short-handed lineups.

Without Leonard, who sat after playing Saturday, or starting guard Patrick Beverley, who was a late scratch because of a sore groin, the Clippers blew an 18-point lead before halftime, defenseless as a point guard they’d dealt in exchange for George picked them apart.

Shai Gilgeous-Alexander scored 32 points, matching the career high he set one game earlier, and was part of a three-guard Thunder lineup that wore down the Clippers.

The Clippers are 4-5 when Leonard sits, and 11-3 when George and Leonard play.

Gilgeous-Alexander’s partners in the backcourt included Dennis Schroder, who scored 20 points in the second half and finished with 28, and Chris Paul, who had 12 points, seven rebounds and six assists. The Clippers committed 15 turnovers, including six in the fourth quarter that led to 10 points for Oklahoma City.

“I was just disappointed defensively,” Rivers said. “I thought from the middle of the second quarter, I thought they were so much more the physical team. That’s where the turnovers came.”

Lou Williams scored a team-high 22 points for the Clippers, who played Saturday night in San Antonio and, because of the absences of Beverley and Leonard, started a lineup that had never played together: George, Williams, Maurice Harkless, Ivica Zubac and Patrick Patterson.

It was the seventh game in which George has played but Leonard has not, which has led George to be more aggressive to compensate. After scoring eight points in his first four minutes, George missed nine of his next 10 shots. He finished with five turnovers. He was part of an offensive struggle in the third quarter, when the Clippers failed to make a shot for nearly six minutes.

“They’ve been loading up more on me and try to make it more tough, more physical,” George said. “So that’s really how the game’s been. They’re trying to take me out of the game knowing Kawhi’s not in.”

Where a zone-heavy approach stymied Oklahoma City in the first half, the Clippers’ defense gave way to start the second, leading Rivers to call two timeouts within the first six minutes as Oklahoma City tied it 69-69. And it was all happening even though Danilo Gallinari, the former Clipper who is Oklahoma City’s second-leading scorer, sat out because of a balky ankle.

In the fourth quarter, Oklahoma City successfully challenged a basket and foul by Montrezl Harrell, who finished with 18 points, wiping out the points with 5 minutes 35 seconds to play. When Gilgeous-Alexander scored on the next possession, the Clippers lead was down to 98-96. They fell behind with three minutes to play, quickly regained the lead, only to see it gone for good with 1:47 to play after a three-point basket by Schroder.

George re-signed with the Thunder on a four-year contract in 2018 before asking out via trade one year later, but spoke fondly of his time in Oklahoma City.

“I will always view this as one of the best organizations that I could have ever played for,” he said. “In so many ways it was a great imprint. A lasting impression on me.”