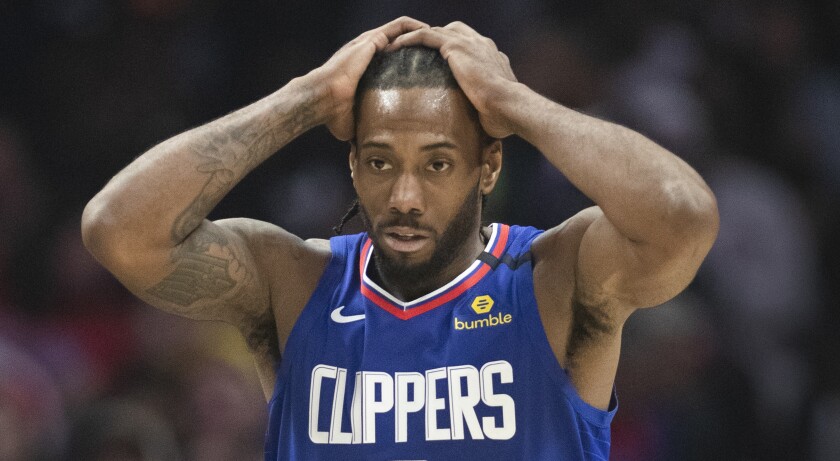 Clippers don’t always live up to their betting potential

Complacency could become a recurring problem for the Clippers and their backers.

Since Christmas, the Clippers lost to Memphis by 36 points as 10-point favorites, lost to Utah by 13 as 7.5-point favorites and beat New York by three while giving seven points.

They don’t play like that every time out, of course. Consider the big Christmas win over the Lakers. Kawhi Leonard and company also took care of business against lesser lights Detroit and Sacramento.

Their next game is at home against Golden State, followed by a trip to potential playoff opponent Denver on Sunday.

The Lakers are 2-4 straight up (SU), 1-5 ATS against their last six opponents with winning records.

• UCLA basketball is still searching for consistent quality. The Bruins (+8.5) upset Washington, 66-64, on Thursday to end a three-game losing streak that included a 19-point market miss against Cal State Fullerton. But that win was followed by a 79-71 overtime loss at Washington State as a 1.5-point favorite.

UCLA is now 8-7 SU, 7-8 ATS. The Bruins are off until Saturday, when they host USC. They need some big wins to even crack the top 120 in Ken Pomeroy’s computer rankings. UCLA isn’t currently seen as NCAA tournament or NIT caliber.

Early Pac-12 assessments have USC a bubble team for the NCAA tournament along with Stanford and Washington. Grading out as tournament-worthy so far are Arizona, Oregon and Colorado.

• In the NHL, the Kings are showing recent Under tendencies. Six of their last seven games have stayed Under posted totals, with the offense barely averaging two goals per game in regulation.

• The Ducks are skating in the other direction. Anaheim’s high-scoring 5-4 shootout win Sunday night over Nashville made it six Overs in the last seven games. For any sport, those new to sports betting should consider playing Over/Unders if they’re having trouble picking team winners.

• In the NFL, both of last season’s Super Bowl teams have been eliminated. The NFC champion Rams didn’t even reach the playoffs. Defending league champ New England (-4) was upset by Tennessee 20-13 on Saturday. Tom Brady and company were unable to move the chains (losing third-down conversions 50% to 38%), unable to finish drives (losing red-zone touchdown percentage 100% to 33%) and losing the turnover category, 2-1.

Betting markets were slow to accept New England’s demise. The Patriots were just 1-5-1 against the spread when facing teams that reached the playoffs. The only cover was a grinder at Philadelphia. An 0-1-1 mark against Buffalo was joined by non-covers against Baltimore (20 points), Houston (9.5 points), Kansas City (10 points) and Tennessee (11 points).

VSiN will take a close look at the full NFL divisional round in our late-week report. Then we’ll study LSU-Clemson in the College Football Playoff championship game Monday (5 p.m., ESPN).