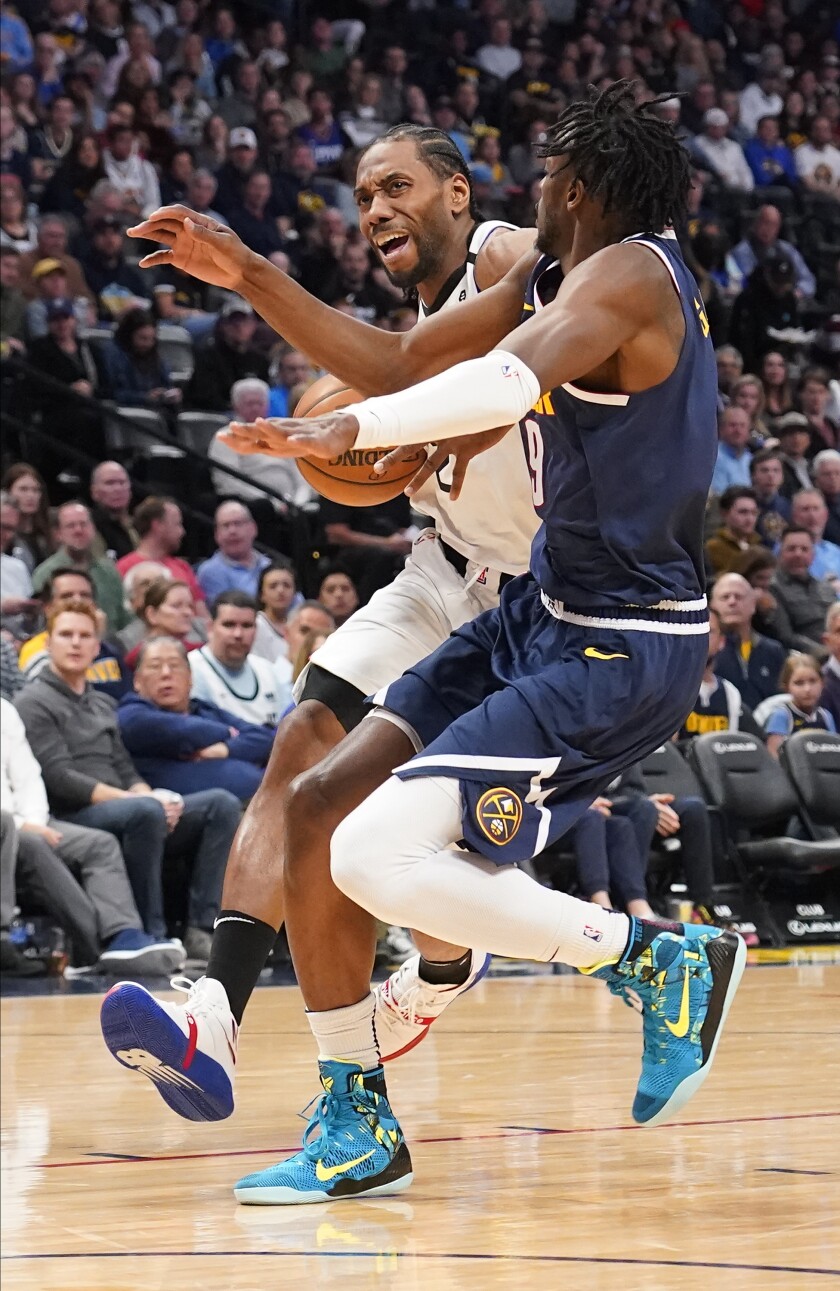 Clippers fall back into bad habits against the Nuggets, and lose without Paul George

Paul George didn’t travel to Colorado for the Clippers’ one-game road trip, but the inconsistency that has dogged his team for much of this month was present again Sunday.

A strong start, behind a seldom-used lineup, unraveled quickly at Pepsi Center and a second quarter in which the Clippers were outscored by 15 points ultimately doomed in a 114-104 loss to a Nuggets team that had lost in the same building only 24 hours earlier.

Down by as many as 20 points in the second half, the Clippers did not go meekly, and cut their deficit to eight points with 3 minutes 56 seconds remaining with a 12-2 run that ended with a long three-pointer by Kawhi Leonard. Denver didn’t score for the next 90 seconds, but the Clippers’ offense stalled, as well, and a chance to gain a possession was lost when a replay review with 2 minutes 41 seconds left to play upheld an offensive foul call on Montrezl Harrell.

Frustration boiled over with just over one minute to play. After guard Patrick Beverley fouled out on a call he contested with officials before being led to the bench by teammate JaMychal Green, coach Doc Rivers was whistled for two technical fouls and ejected with 1 minute 11 seconds to play.

Before Rivers reached the tunnel to exit the court, he pointed to officials one last time.

The strong start, disastrous second quarter and rally at the finish continued the up-and-down play which has defined much of the month and began when the Clippers allowed a season-high 140 points to Memphis on Jan. 4. Despite winning the two games that followed, concerns about their defense, steadiness and turnovers were not allayed, and those factors were again critical during their loss to Denver.

Without George, who did not make the trip because of a strained left hamstring that kept him out a second consecutive game, the Clippers started a lineup that had played together only six combined minutes this season and been outscored by nine points in that span. And yet Leonard, Beverley, Ivica Zubac and typical reserves Williams and Patrick Patterson were sharper on both ends than Denver, during their first five-plus minutes together and opened up a five-point lead.

With Patterson drawing star Jokic away from the basket, Leonard was able to catch the ball in one-and-one situations and drive wherever he pleased en route to six quick points in his first seven minutes. The most encouraging sign to emerge from the first quarter was the lone turnover committed by the Clippers.

They’d entered Sunday turning the ball over on 15.3% of their possessions, the league’s eighth-worst rate, and that number has ticked upward this month.

Denver, meanwhile, was ranked seventh-best by the same metric, but their numbers had improved by more than four percentage points in the new year to a league-best 9.2% of possessions. And it has needed every last opportunity to score, given a sieve-like defense that has been the worst in the league over the last 10 games.

Denver had also been one of the league’s worst-shooting teams on three-pointers during the last 10 games, yet found its cure in the Clippers, making seven of its 14 three-pointers in the first half and 11 of 25 overall.

The Nuggets also took advantage when one of the Clippers’ costly habits returned, scoring 12 points off seven second-quarter turnovers to take a 66-52 lead at halftime.