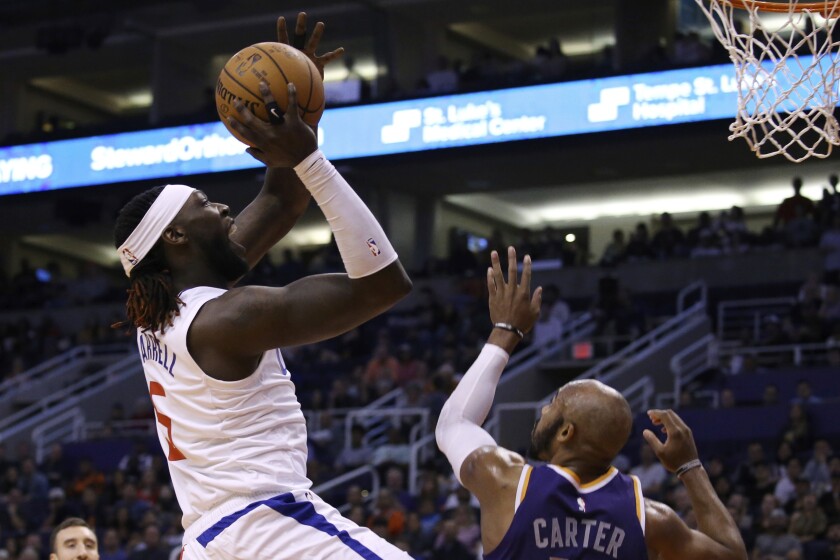 Last spring, new Suns coach Monty Williams was discussing the style he wanted Phoenix to play when he brought up the 1999 Orlando Magic to one of his assistants.

Under a first-year coach named Doc Rivers, the “Heart and Hustle” Magic unexpectedly won 41 games. The team had no superstars. Instead, it had unheralded players such as Williams, a forward who tried to grind down opponents. To Williams, that 20-year-old memory sounded like the ideal template for the foundation he hoped to lay in Phoenix.

They have lived up to that vision so far. Less than 24 hours after losing in overtime at heavily favored Denver, the Suns returned to Talking Stick Resort Arena on Saturday and scrapped and clawed their way to a 130-122 win that ended the Clippers’ hot start to this season and the Suns’ 12-game losing streak in the series.

“We had no business winning the game tonight,” said Rivers, the Clippers’ coach. “They just played so much harder. They were so much more committed to what they were doing.”

Devin Booker scored a game-high 30 points for the Suns, who also received 20 points from Kelly Oubre Jr. Montrezl Harrell scored 28 points to lead the Clippers and had seven rebounds. The Clippers’ bench scored 66 points, the third consecutive game they have gone for at least 60, thanks to 23 from Lou Williams.

Slow defensive rotations crippled any hopes of a comeback. The Suns made 17 three-pointers, many off wide-open looks as a defender scrambled to close out a beat too slow.

“If we’re going to switch everything, we’ve got to talk it out,” center Ivica Zubac said. “We’ve got to talk no matter who is on the floor; even if you’re playing with the guy for the first time, you’ve got to talk. You can’t stay quiet.”

It didn’t help the communication that the game was played in front of a boisterous crowd that grew more animated as the rebuilding Suns kept attacking the team favored to win the NBA title.

“We’re going to have to get used to having a target on our back,” forward Maurice Harkless said. “I’ve been on teams where we got excited for games like this. We can’t really ease into any games because teams are going to give us their best shot.”

The Suns were without one of their best players, big man Deandre Ayton, who was serving a25-game suspension for testing positive for a banned diuretic, and starting point guard Ricky Rubio watched in street clothes after suffering a knee contusion in Denver.

What they did have was stifling first-half defense on Clippers star Kawhi Leonard and enough of a fourth-quarter lead to hold off a late rally. Phoenix had a 15-point lead with 4:42 remaining, but a pair of three-pointers by Williams and a basket by Harrell trimmed the deficit to seven less than one minute later.

It was still seven with 1:50 remaining when Oubre stole Williams’ pass into a crowded key and took off downcourt, where he lofted an awkward layup before flushing his own rebound for a dunk and 121-112 lead.

Watching from the bench was Leonard, who had sat the previous 2:30 as the Clippers tried to keep him under an unspecified minutes limit. He checked back in immediately and made a three-pointer, but Phoenix’s Tyler Johnson and Booker answered with threes.

It was Phoenix’s first victory against the Clippers since April 13, 2016.

The last time Williams faced Leonard, it was the second round of last season’s Eastern Conference playoffs. Williams, a Philadelphia assistant, and the 76ers defended Leonard with taller players and double teams, throwing every trick they could at the Toronto Raptors’ star — only to see him average nearly 35 points for the series anyway, and hit the game-winning, series-clinching shot in Game 7.

“I don’t know if there’s been a player that has improved as much as he has from the start of their NBA career to where he is now,” Williams said. “You’d be hard-pressed to find anybody that’s improved that dramatically.”

Saturday, the Suns coach tried to succeed where the 76ers failed. Oubre and Mikal Bridges, a pair of tall wing players with 7-2 wingspans, stayed glued to the Clippers star’s waist. Their teammates played him physically.

Leonard made only two of eight shots in the first half, and the Clippers had to rally for a 55-all tie at halftime.

Leonard finished with 27 points, 10 assists and eight rebounds in a season-high 32 minutes.