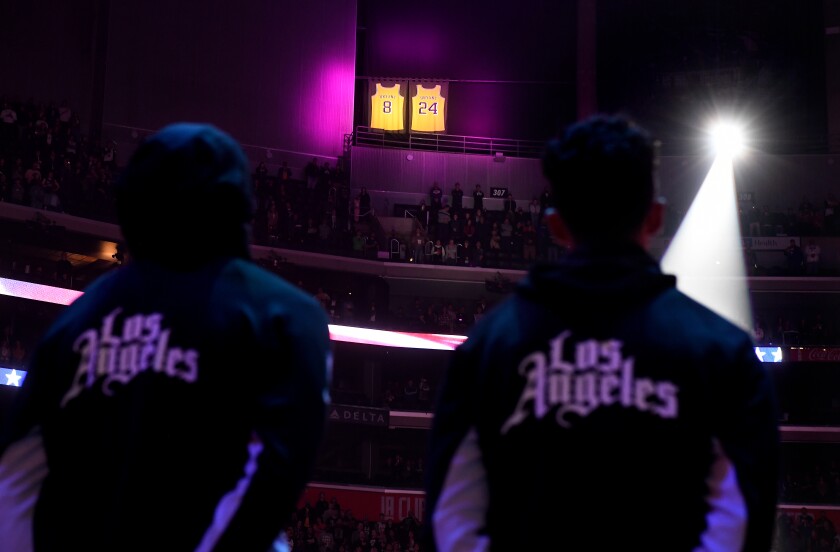 Clippers give moving tribute to Kobe Bryant before falling to Kings

They came onto the court hours before the game Thursday night wearing a KB24 patch on the front of their Clippers’ shooting shirts and either a No. 8 or 24 on the back, the numbers representing the jerseys Kobe Bryant wore during his 20-year career with the Lakers.

They kept Bryant’s retired numbers of 8 and 24 lit up high above on the north wall of Staples Center while the rest of the Lakers’ numbers were covered up as always for Clippers games. Their coaches all wore Kobe Bryant sneakers during the game.

They had a moving and emotional video tribute to honor Bryant, his 13-year-old daughter, Gianna, and the other seven victims killed in a helicopter that crashed into a hill in Calabasas on Sunday. Paul George, who viewed Bryant as a mentor and close friend, narrated the video.

Amid all that, amid losing Kawhi Leonard to start the game with tightness in his lower back, the Clippers had to play the first NBA game inside the arena since Bryant died.

It did not turn out well for the Clippers.

They fell into a 20-point hole in the second quarter that led to a 124-103 loss to Sacramento, behind Kings speedy point guard De’Aaron Fox scoring a career-high 34 points.

The Clippers had won a game in Orlando on Sunday after they heard the news about Bryant and they had three days to come to grips with that before playing again.

Over the course of that time, Clippers coach Doc Rivers said they came together as a group on the best way to celebrate Bryant.

“The best way if you want to honor Kobe — and we talked about this even on Sunday — is to go win, not just win tonight, but win it [all],” Rivers said before the game. “So that’s our journey. It was already our journey, and then this happens and I think our guys understand, you know, if you really want to salute him ...

“He made a lot of sacrifices to be a winner, Kobe did, and so for us to win, we’re going to have to do the same thing, otherwise we will not win. So I think that’s our journey now as well.”

As he walked down the hallway inside Staples, Kings coach Luke Walton saw the miniature marquee that said, “Rest In Peace Kobe and Gigi.” And it had purple and gold hearts.“I think from this point on, it’s always going to be tough,” George said. “It just is what it is, especially being here in L.A. It’s always going to be tough. I think every time we’re in this arena, being reminded of him just being in the rafters, you’re always are going to have a reminder.”

George struggled in his return.

He scored only eight points in 19 minutes. He missed eight of his 10 shots, three of four three-pointers.

Beverley had 11 points in 24 minutes and Shamet, who started in place of Leonard, had 15 points, all of them coming on the guard going five for eight from three-point range.

“We’ll just chalk this one up, get back in the gym, get back to work,” Rivers said. “I’m glad it’s behind us though. Though we didn’t win, I think the game, this now will help us a little bit.”

The Clippers couldn’t deal with Fox, who also had eight assists and three rebounds.

The Clippers’ three-point defense got torched by the Kings, who shot 51.2% from long distance, going 21 for 41.

“Give them credit,” Rivers said. “They played last night. They were in a very good rhythm and they played hard. They executed their stuff. We were clearly flat in every area. It was tough too, basketball-wise.”

George knew it would be an emotional.

“We had a couple of days to digest it, mourn from it. The fact of the matter is any time we honor Kobe it’s going to be emotional. But I don’t think that had an effect on tonight.”

And why he did he narrate the tribute video?

“They contacted me to do it,” he said. “Why would I turn that down?”