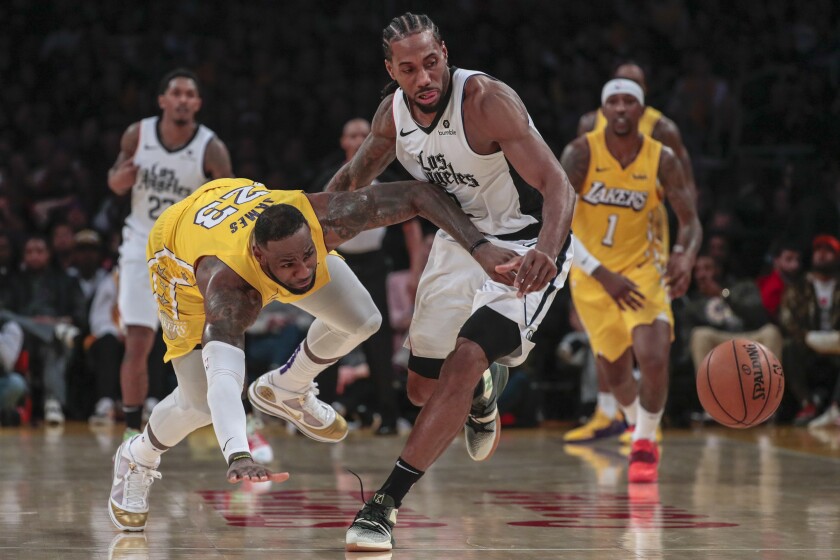 Clippers have the luxury of unleashing Kawhi Leonard when needed

These two players are different. Way different — and it’s more than one being more private and the other more public about their lives.

But as big as the difference is between James and Leonard, there might be a bigger one between the Clippers and the Lakers. It’s a “luxury,” as Paul George termed it, that the Lakers just don’t have. The Clippers don’t always need everything from Leonard. And for most of the season, they haven’t even considered asking for it.

Before the Clippers beat the Lakers 111-106 on Christmas, Clippers coach Doc Rivers stood outside his team’s “visiting” locker room and hinted that Leonard might be ready to be fully unleashed as a defensive weapon, that the Clippers wouldn’t have to pick the spots to use him on the other team’s best player so carefully.

Turns out Christmas was the perfect time to test it out.

The Clippers sent a message from the opening tip when Leonard crouched and spread his long, muscular arms and baseball-glove-sized hands in front of James that they were serious about slowing down the Lakers’ best player in the second meeting between the two teams this season.

The Clippers have generally used Maurice Harkless on the team’s best perimeter players, but because of the Lakers’ size, Rivers moved Harkless to the bench in favor of Patrick Patterson, who is a more traditional power forward, creating the need for Leonard to step up and guard James.

“I just thought it was time,” Rivers said. “We talked about it. I thought the last time we played them we put Pat [Beverley] on LeBron early and you remember LeBron got going early in the post. We didn’t want him starting on the post so we thought putting Kawhi on LeBron early would take [him] off the post early. And that’s what happened.”

James finished with 23 mostly difficult points, missing 10 three-pointers as the Clippers and Leonard pushed him to the perimeter.

“It’s not about you guarding a player one-on-one,” Leonard said. “We’ve been losing a lot of games from team defense, not even one-on-one matchups. So just for me, it feels like we need more team defense other than you over-emphasizing me guarding LeBron or their best player. It’s more about the team.”

Leonard’s right. It wasn’t just him. The Clippers used almost all of their options on James. In addition to Leonard, Beverley, George, Harkless, Patterson, Montrezl Harrell and JaMychal Green all took a crack.

Early, the Clippers fought over screens and stuck with their assignments. Late in the game, they flexed their versatility by switching everything. Sending Leonard at James from the start “set a tone,” according to one Clippers staffer.

“He just creates a lot of confusion just by his size and knowledge of what to do on the defensive end,” Lou Williams said.

The Clippers don’t need to use all of Leonard’s skills on any given night. Same for George. And no Clipper doubts what Beverley is capable of when he’s challenged on the defensive end.

There is no question James is critical. Even in a game during which he wasn’t full-strength, he played nearly 39 minutes, second only to Anthony Davis, and took seven more shots than anyone else on his team. James ultimately still had a plus-three rating in the final box score — the lone starter to be on the good side of that stat.

There’s still some mystique to Leonard as a defender in big moments, though. With the Raptors down 2-0 to the Bucks in the Eastern Conference finals, Toronto moved Leonard onto Giannis Antetokounmpo and won the next four games on its way to winning the NBA title.

The Clippers just don’t have to do it every game against every star. They can save it for special occasions.

This was a do-it-all game for Leonard, who finished with 35 points, 12 rebounds and five assists on one end and a bunch of physicality and defensive mastery on the other.

“Whatever it takes to win,” Leonard said of his game-opening assignment. “If it’s me guarding him or me guarding someone else and switching onto him, I always love the contest.

“He’s a great player and playing on Christmas, it was fun.”