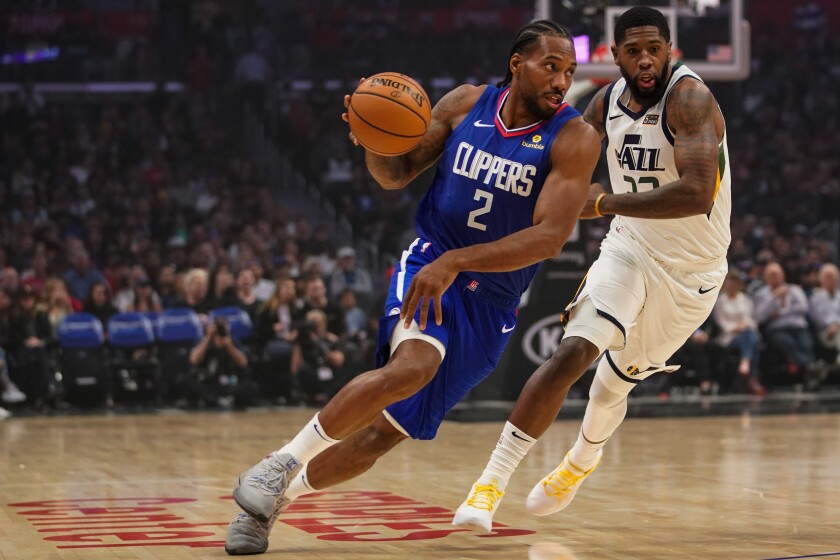 For more than a year, the Clippers have self-identified as a “blacktop” team that feels more kinship with the grit of weekend grinders than polished pros, to the point that their home court is now ringed by a map of city streets on a black background.

If their branding is no longer new, it nonetheless took on new meaning Sunday night at Staples Center. The Clippers’ offensive struggles through their first three quarters against Utah were pronounced enough to appear they were shooting on the double-iron, ultra-stiff rims that clang jump shots on playgrounds across Los Angeles.

But what started ugly ended a thing of beauty for Clippers fans, who chanted “M-V-P!” at Kawhi Leonard during a fourth quarter in which the superstar forward scored 18 of his 30 points and his team rebounded, in every sense of the word, en route to a 105-94 victory against the Jazz.

“Maybe if I made shots early, we wouldn’t have got in that predicament,” Leonard said. “Lou [Williams] stepped up and made a big three. JaMychal [Green] did as well, hit a big, wide-open three that put us up four or five at the time and that kind of got us going, got me going.”

Leonard now ranks first in the NBA in fourth-quarter scoring, with his 12.6 points on 55% shooting surpassing the 11.7 averaged thus far by Portland’s Damian Lillard.

But after scoring only five points in the first half and 12 through three quarters, his late outburst was stunning even by his standards. He also dished a pair of assists that led to six more points.

“We were down by 10 in the third and I was on the bench and I was like, ‘We’re good, we got Kawhi,’” center Ivica Zubac said. “That’s what he does. He gets you buckets when you need them.”

Leonard received a standing ovation upon checking out of the game with 15.4 seconds left, but on a night when the Clippers (5-2) shot 39% overall and 21% on three-pointers, the forward was not alone in pulling his team out of its scoring funk.

Eighteen offensive rebounds led to 29 second-chance points for the Clippers, who are 4-0 at home for the first time in six seasons.

“Because we’re so much longer at every position we have a thing: If you’re in the paint, either go get the ball or get back,” coach Doc Rivers said. “And I think our guys are choosing to go get it.”

The Jazz (4-3), who also shot 39%, could not duplicate such success off their misses, scoring only eight second-chance points. Donovan Mitchell tried to out-duel Leonard, scoring 17 of his 36 points in the final quarter, but he was scoreless over the last 2:58 against the long-armed defense of Leonard and Maurice Harkless. In that span, a one-point Clippers lead grew.

“Switching on him toward the end of the fourth quarter kind of helped it so we could get extra length on his contest,” Leonard said. “We all want to play defense and make stops and I think if we’re all on a string together, it’s something special.”

Montrezl Harrell scored 19 off the bench for the Clippers and Williams added 17.

Four days after setting season lows for made field goals, three-pointers and free throws in a 14-point loss in Salt Lake City while playing without a load-managed Leonard, the Clippers fared no better to start Sunday despite his presence. Not only did they trail by nine within the first 4:08, but even Leonard — he of Thursday’s 38-point game against San Antonio — missed his first five shots.

But with five minutes left in the first half, the Clippers were up 12 after a three-pointer by Landry Shamet. During the next five minutes, however, they missed seven of eight shots and the Jazz strung together a 17-3 run to lead at halftime by two.

“Crushing for us,” Rivers said.

The Clippers’ 65 points through three quarters were a season low, six fewer than their previous performance against Utah.

Of course, all was forgotten after a fourth quarter to remember. Leonard made five of 11 shots and played the role of closer, again.

“Like any dominant player, when the game is in the balance, it’s close, he did what he do — took over the game,” said Patrick Beverley, the 6-foot-1 guard who grabbed nine rebounds.

“It was like a boxing match. But I guess we got the last jabs out the way.”