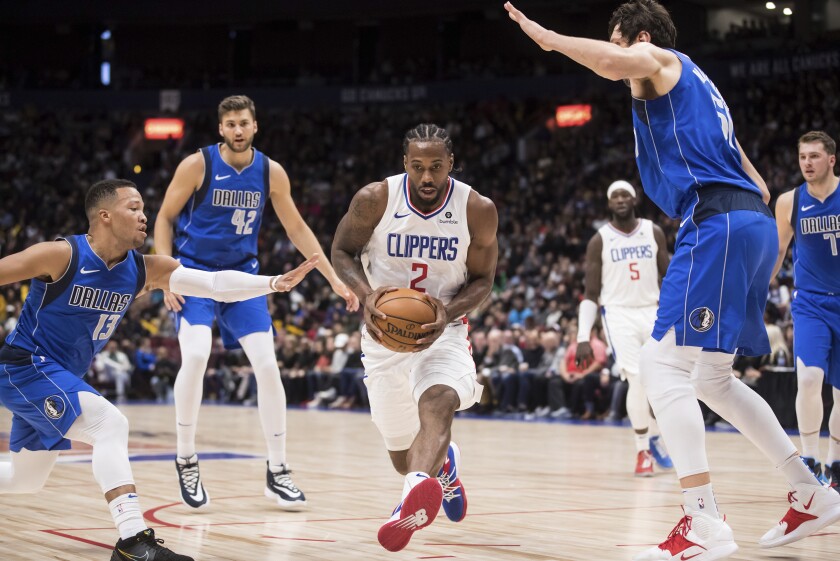 Eight hours before the Clippers played their final preseason game Thursday, guard Patrick Beverley jumped out of a courtside seat and jogged into shootaround.

For much of their last tune-up before Tuesday’s regular-season opener, his team was anything but.

They needed six minutes and 26 seconds to make their first field goal, and made just one of their first 11 three-pointers, dooming the Clippers from the start of a 102-87 loss to Dallas at Rogers Arena that was played without several key contributors.

“We got four or five days to get right,” coach Doc Rivers said.

Montrezl Harrell scored a team-high 14 points, Kawhi Leonard added 13 in his first game in Canada since leading Toronto to June’s NBA championship, and Jerome Robinson and Patrick Patterson each scored 12. Dallas received a superb performance from Kristaps Porzingis (18 points, 13 rebounds), who personally added to the Clippers’ early shooting struggles by blocking or altering three consecutive shots at the rim.

The crowd loved that sequence, but they undoubtedly came to see Leonard. If there were any lingering disappointment from his decision to sign with Los Angeles in July’s free agency, it was not apparent in the warm, loud reception he earned during his pregame introduction. Cheers from a sold-out crowd of 17,204 spontaneously burst from pockets of the crowd whenever Leonard was passed the ball.

“It was great just to be back,” said Leonard, who played 22 minutes. “Just going around in the summer time, even after me signing with the Clippers, Canadians came up to me that are in America or vice versa when I was out there and they said ‘thank you’ for everything I’d done. Very nice people.”

Is Kawhi where he wants to be entering the season opener? “Yeah, for the most part.” Some or what he said after his Canadian return. pic.twitter.com/rHBzGTFX7M

One week after showing off his skills as a distributor in his Clippers debut, he concentrated his efforts on his shooting, making five of his 19 field goal attempts.

His performance was not without its highlights — the most vivid coming more than halfway through the third quarter. Leonard stripped the dribble of Dallas second-year star guard Luka Doncic and followed with a circus assist to Patrick Patterson for a transition dunk.

“It was awesome to see him in Canada and everybody gave him a warm welcome,” rookie guard Terance Mann said.

Before tipoff, Rivers made clear he did not see Thursday as a litmus test for his team’s readiness ahead of the opener against the Lakers, saying the team’s accumulated practice time since the opening day of training camp on Sept. 30 was more telling than any one preseason game.

With that in mind, Rivers rested Beverley, a regular starter, and bench spark plug Lou Williams, and was without two-way forward Amir Coffey, guard Rodney McGruder — who each nursed ankle injuries — and forward Paul George, whose surgically repaired shoulders continue to heal.

The absences made his lineups, particularly in the backcourt, resemble nothing like those that are expected to face the Lakers, Warriors and Suns in the season’s first week — let alone challenge for the Western Conference title in May, as league executives believe. A survey of NBA general managers, published by the league hours before tipoff, found that 46% believed the Clippers would win the 2020 NBA title.

Still, even if the Mavericks matchup was not an indication of the Clippers’ long-range potential, it was a performance that was mostly difficult to watch.

By the time Leonard made his team’s first field goal, a tough runner in the lane, more than half the first quarter had passed and Dallas led, 13-3. The Mavericks’ margin widened to as much as 22 points before taking a 20-point halftime lead. Maurice Harkless missed all but one of his seven attempts, and knock-down shooter Landry Shamet continued a preseason in which his shots have largely misfired to an unexpected degree.

Shamet, who made the fourth-most three-pointers by a rookie in NBA history last season, scored five points on 2-of-10 shooting. He made 5 of his 30 three-point attempts all preseason.

“Different guys playing with different guys,” Rivers said of the shooting struggles as a whole, shrugging off any concerns. “Just missed shots.”