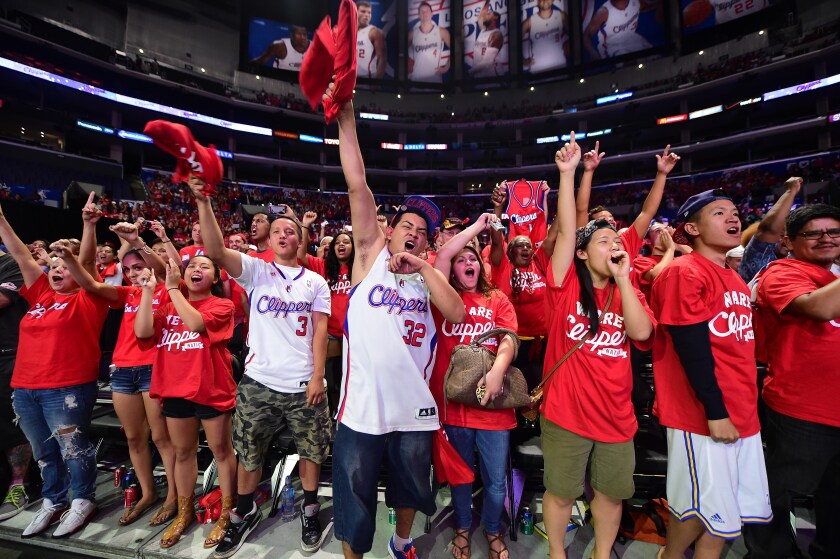 To get in the doors at Staples Center on opening night of the NBA regular season, be prepared to pay a steep price.

On Thursday, tickets on StubHub for the highly anticipated Clippers’ matchup against the Lakers on Oct. 22 began at $166 for the nosebleeds. On SeatGeek, another ticket reseller, the get-in price began at $168.

And it’s not only the opener that will be expensive. Following the offseason acquisitions of Kawhi Leonard and Paul George, the Clippers are expected to remain a hot ticket all season.

But not everyone watching the Clippers will have shelled out a significant sum.

Starting 90 minutes before every Clippers home game this season, fans wearing red and blue will be able to purchase $10 tickets at Staples Center’s box office windows 16 and 17, the team announced Thursday. The promotion is part of a partnership with Honey, a Los Angeles-based tech firm that recently acquired the naming rights to the team’s practice facility. Fifty to 200 such tickets will be set aside for each home game.

Tickets must be purchased in person, and each ticket comes with a T-shirt featuring the face of Clippers guard Patrick Beverley.

Beverley said he was happy to be the face of the campaign. After a game last season, Beverley said he played for Clippers fans because he identified with “the people in the back” of the arena, having grown up in Chicago sneaking into Bulls home games.

“We used to sneak into the United Center, watch some games; they chased us out and everything,” he said. “But I remember sneaking in. So now [the fact that] I am ... able to get people $10 tickets is a crazy, unbelievable feeling.”

Beverley hoped the campaign would make suddenly glamorous Clippers home games more accessible to “die-hard fans who were there last year the whole time supporting us, before the Kawhi-Paul George era.”