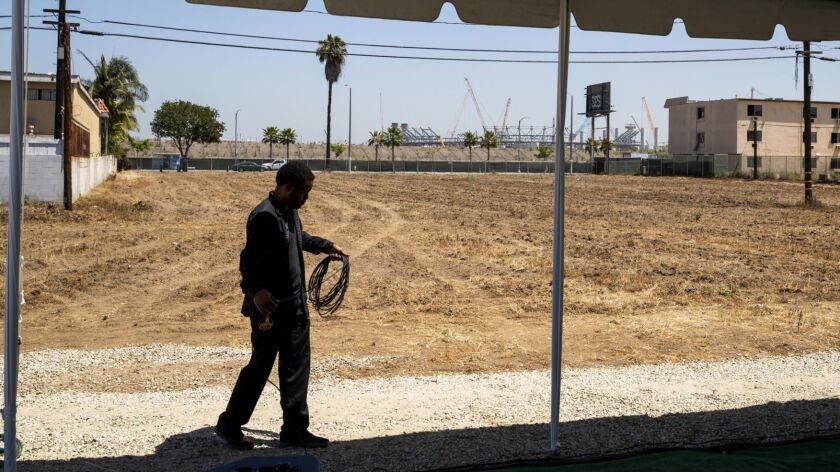 Seeking to call Inglewood home, the Clippers have proposed committing an estimated $100 million in benefits toward the city as part of building an arena.

Such benefits, presented Tuesday at a meeting of Inglewood’s council by city manager Artie Fields, would include “up to $75 million in low-interest loans for the acquisition, preservation, or development of affordable and mixed-income housing in Inglewood,” according to the team. Other proposals include more than $12 million for youth and education programs, up to $6 million toward improvements of its public library and financial assistance for renters and first-time homeowners in the city.

The Clippers say the value of their “community benefit plan” would be the largest connected to the construction or renovation of a stadium or entertainment venue in the state.

The Clippers have played in Staples Center since 1999 but upon the end of their lease there in 2024 plan to move to the proposed Inglewood Basketball & Entertainment Center at the southeast corner of Century Boulevard and Prairie Avenue. Clippers owner Steve Ballmer has said the 26-acre development will be privately financed and anchored by an 18,500-seat, $1-billion arena, a practice facility and headquarters for the Clippers’ business operations, and spaces for community use.

Gillian Zucker, the Clippers’ president of business operations, said the specifics of the proposed benefits were reached through discussions with Inglewood residents and city officials.

The developers’ intent is “making sure that there’s a positive benefit of this building,” Zucker said. “Even if you have no interest in basketball, and can’t name our coach or a player and will never come to our game, that you’re still glad the Clippers are in Inglewood.”

In July, Ballmer expressed confidence that construction will begin at the latest by mid-2021 despite litigation seeking to block the project. Among the legal challengers is Madison Square Garden Co., which is the owner of the nearby Forum and overseen by New York Knicks owner James Dolan. NBA Commissioner Adam Silver said in June that he is supportive of the Clippers’ efforts to build their own arena.