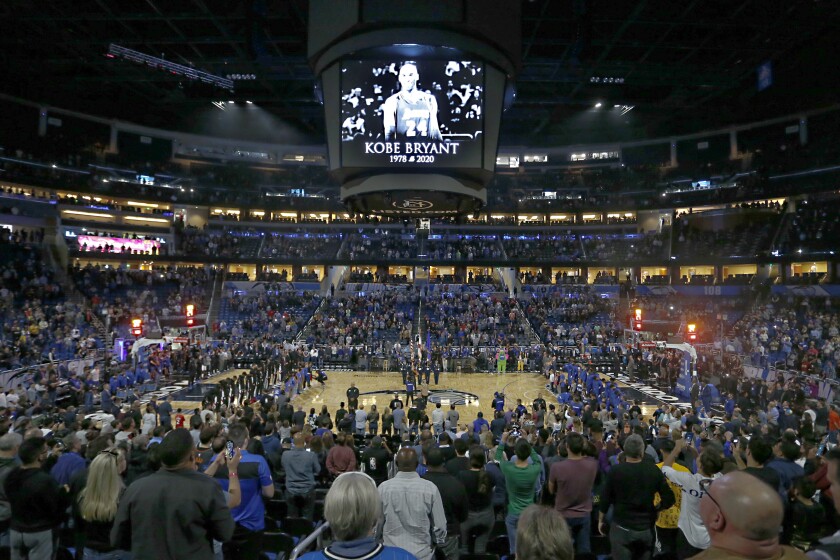 The Clippers felt as though they’d been put through an emotional wringer when playing Sunday in Orlando, where they tipped off against the Magic less than four hours after receiving news of Kobe Bryant’s death in a helicopter crash.

Once their 112-97 victory was over, however, an understanding began to take hold that an even more emotional scene awaits them Tuesday at Staples Center, when the Lakers host the Clippers.

The teams’ previous meetings this season, both Clippers victories, were already played amid a charged atmosphere, given each organization’s expectation to contend for this season’s NBA championship. Yet Tuesday, in what will be the Lakers’ first game since the death of the player Magic Johnson called the “greatest Laker of all time,” figures to be a far more emotional backdrop.

“That’s going to be a tough one,” Clippers coach Doc Rivers said Sunday. “Again, all of us, we’re just not equipped to know how to handle it. We’re just doing our best.”

The Clippers were the only NBA team to play Sunday that did not make at least one player available to speak after the game; players such as Lou Williams, a former teammate of Bryant’s, requested the postgame availability be canceled, Rivers said afterward. Behind closed doors, players formed reactions that quickly spilled out on various social media platforms.

On Instagram, forward Paul George, whose favorite player as a child in Palmdale was Bryant, wrote: “Still can’t believe this. I’m grateful to have someone like you to look up to growing up in Cali. You inspired me to play basketball and to dominate on both ends. ...

God please be with the families involved. Heal every broken heart and be there in there time of need! Still can’t believe this 😢 I’m grateful to have someone like you to look up to growing up in Cali. You inspired me to play basketball and to dominate on both ends. You made it cool to play defense and bust someone’s ass on offense. Thank you for taking me under your wing and being in my corner. Rest easy Kobe! 🙏🏾🙏🏾😢🐍

“Thank you for taking me under your wing and being in my corner. Rest easy Kobe!”

Forward Maurice Harkless thanked Bryant on Instagram “for inspiring a young kid across the country in Jamaica Queens to want to make something of myself , real life superhero.”

Still at a loss for words ... thank you for inspiring a young kid across the country in Jamaica Queens to want to make something of himself , real life superhero. RIP Mamba

Guard Patrick Beverley posted a photo of himself and Bryant with a caption that began, “speechless right now.”

Center Ivica Zubac was drafted by the Lakers in 2016, months after Bryant’s career ended, and played parts of three seasons with the organization.

“Still can’t believe this happened,” Zubac wrote on Instagram. “Rest in Peace Kobe & Gigi. One of the reasons I started playing basketball.”

The Clippers were not mere bystanders during the 20-year career of Bryant, a star who shared their city and arena while playing for their rival. From the front office personnel to those in the locker room, multiple Clippers’ careers were entwined with Bryant’s. Clippers assistant coach Tyronn Lue, who won a championship as Bryant’s teammate in 2001, openly wept on the sideline at times during Sunday’s victory.

Team consultant Jerry West swung the trade with Charlotte in 1996 that brought Bryant, as the 13th overall draft pick, to the Lakers. West called news of the crash, which claimed the lives of Bryant, his 13-year-old daughter, Gianna, and seven others, “incomprehensible” in a statement.

The Times is offering coverage of Kobe Bryant’s death for free today. Please consider a subscription to support our journalism.

“I will love Kobe forever and always cherish the time that I spent with him. I watch him grow from an energetic kid into the man he became, making a difference in so many people’s life. He has left the world a better place, Kobe’s legacy will live forever.”

Rivers’ playing career ended in 1996, months before Bryant was drafted, and his coaching career began four seasons later. He said he had come to know Bryant better since the future Hall of Famer’s 2016 retirement. Lawrence Frank, the team’s president of basketball operations, was an assistant with New Jersey in 2002 when the Nets lost to Bryant’s Lakers in the NBA Finals.

Given the number and depth of relationships Bryant had with various Clippers, Rivers said he was “worried” about how his team would play Sunday, and indeed, “you could just feel the game, it didn’t have a lot of energy in it.

“I didn’t know if our guys could get through it to be honest. Sometimes the stage is the best place to get away from reality. I thought our guys in my opinion had a two-hour break from an emotional day.”