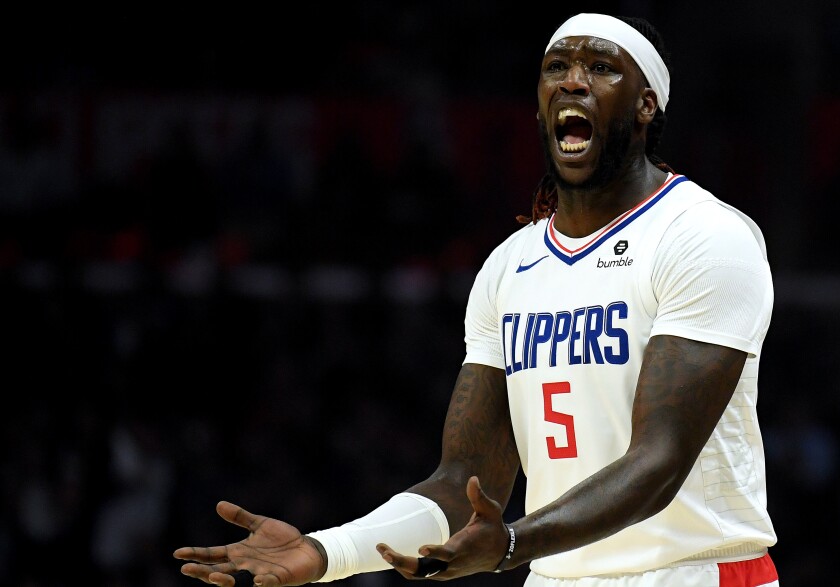 Montrezl Harrell could have shrugged off the Clippers’ loss Sunday in Oklahoma City: two missing starters, too little rest.

Instead, the Clippers center was blunt, saying there was “no excuse” after his team allowed a troubling trend to continue Sunday. During a 118-112 loss to the Thunder, the Clippers couldn’t hold on to yet another big lead, missing an opportunity to gain ground in the Western Conference standings.

“We get comfortable, man, and guys come up and they blitz us,” Harrell said. “We’re not ready for it to be able to withstand the punches that they’re giving us, and we find ourselves in a dogfight. We’re already short-handed, and it comes back to bite us pretty much.

“It’s no excuses. We’ve got a team on the ropes and you’re up and the leads we’re up — 20, 25 points — there’s no excuses. You should be able to put the game away, but we get lackadaisical and start making turnovers.”

What happened against the Thunder, when the Clippers built an 18-point lead before halftime only to be outplayed the rest of the game, was not an isolated issue. They have led by at least 15 points in each of their last three losses — to the Thunder, Houston and Chicago — and even victories have turned into white-knuckle situations.

The Clippers led Indiana by 24 points Dec. 9 only to see their margin shrink to seven with 1 minute 46 seconds to play. Their 20-point lead over Toronto with 11 minutes to play in the third quarter Dec. 11 was sliced to five over the next eight minutes before Los Angeles ultimately regained control. Two days later, the Clippers led Minnesota by 27 points in the second half before the Timberwolves trimmed the deficit to four in the game’s final minute.

Taken together, they represent a contrast to last season’s Clippers, whose defining characteristic was a relentlessness that fueled multiple double-digit comebacks.

“I think once we get those leads, we realize we’re a pretty good group when we’re locked in and we’re focused,” guard Lou Williams said. “We have the attitude that teams are gonna lay down. I think we have to start recalibrating our minds to being the underdogs from the top dogs and know that every team we play against, they’re going to give us their best shot. They’re not gonna stop playing.

“We’ve had that identity being the other team where we’re down 15, 20 points and we’re not gonna stop playing. I think we still have to understand that. So I think that’s where we’re having some slippage.”

Coach Doc Rivers didn’t identify specific trends tying the lost leads together as much as he noted the circumstances surrounding each game. Three games in which double-digit leads were lost were played on the second night of a back-to-back. Starters Kawhi Leonard and Patrick Beverley didn’t play in the losses to Oklahoma City and Chicago, and Leonard also missed the victory against Indiana. But like Harrell, Rivers called the roster’s lack of availability no excuse for allowing the Thunder’s comeback.

“I didn’t think about Pat one time or Kawhi one time,” Rivers said. “I thought we should’ve won the game with what we had on the floor.”

One underlying trend amid the struggles has been too many turnovers. The Clippers have often done well creating offense without a pure playmaking guard, but when their guards, or Leonard, have sat, ball movement has often suffered.

“We can’t just come out and play for 24 minutes,” forward JaMychal Green said. “[We] had a great first half [against Oklahoma City], [but] we didn’t finish the second quarter well going into halftime. We just couldn’t find our rhythm after that.”

Given the Clippers’ frequent personnel changes because of injury, solutions have proved tricky because what works one night could backfire the next. Typically reliable on the glass, owning the fourth-highest rebounding percentage this season, the Clippers allowed the Thunder to grab 16 offensive rebounds.

“We were off of bodies so much” boxing out, Rivers said. “That’s the only downfall to the zone.”

The same zone that snuffed out the San Antonio Spurs’ offense during the third quarter of Saturday’s blowout win — and has been effective all season because of the Clippers’ length — was labeled a culprit of the Thunder loss the very next day. Used selectively to start the season, the zone has become much more common this month, Harrell said.