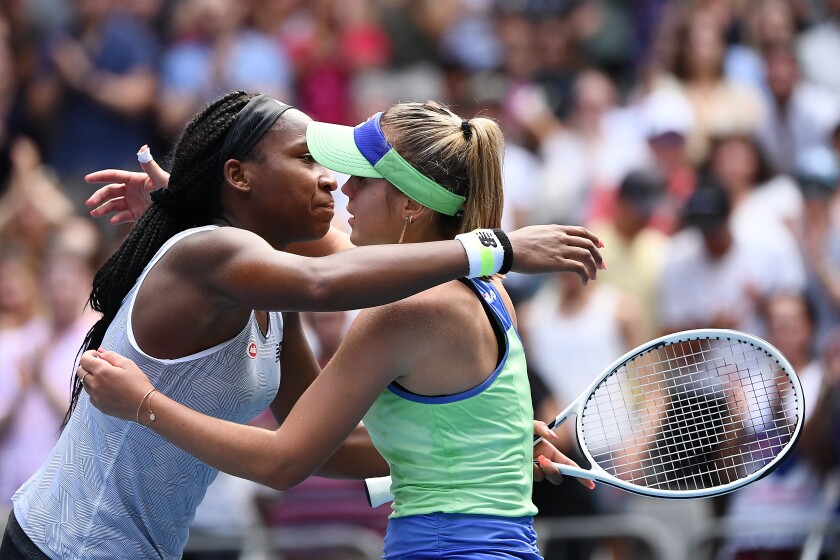 The No. 14-seeded Kenin got early service breaks in all three sets, including the first game of the match against Gauff, who took out defending champion Naomi Osaka in the third round and seven-time major winner Venus Williams in the first.

Kenin will next play either Ons Jabeur of Tunisia or No. 27-seeded Wang Qiang, who upset 23-time major winner Serena Williams in the third round.

Two-time Wimbledon champion Petra Kvitova became the first player to advance to the quarterfinals. She rallied from a set and a break down to win 6-7 (4), 6-3, 6-2 over Maria Sakkari. She’ll next play either top-ranked Ash Barty or Alison Riske, who play a fourth-round night match at Rod Laver Arena.

Kvitova lost last year’s final at Melbourne Park to Naomi Osaka. Defending champion Novak Djokovic was scheduled to play the next match at Rod Laver against Diego Schwartzman. Roger Federer and Marton Fucsovics were to play the last match on the main show court.

Milos Raonic was the first man through to the quarterfinals with a 6-4, 6-3, 7-5 victory over Marin Cilic. The Canadian player had 21 aces over the first two sets and 35 overall, including on match point.

Raonic has not dropped a set through four matches so far this tournament, including a third-round win over sixth-seeded Stefanos Tsitsipas. Raonic faced two sets points in the 10th game of the third set against Cilic but saved them both with aces.

Cilic had two tough five-setters in each of his last two matches.

Raonic will next play defending champion Novak Djokovic or Diego Schwartzman. They were playing their fourth-round match at Rod Laver Arena.

“I haven’t gotten to do this much over the last two years, so it means a lot to me,” Raonic said. “It feels pretty damn good.”