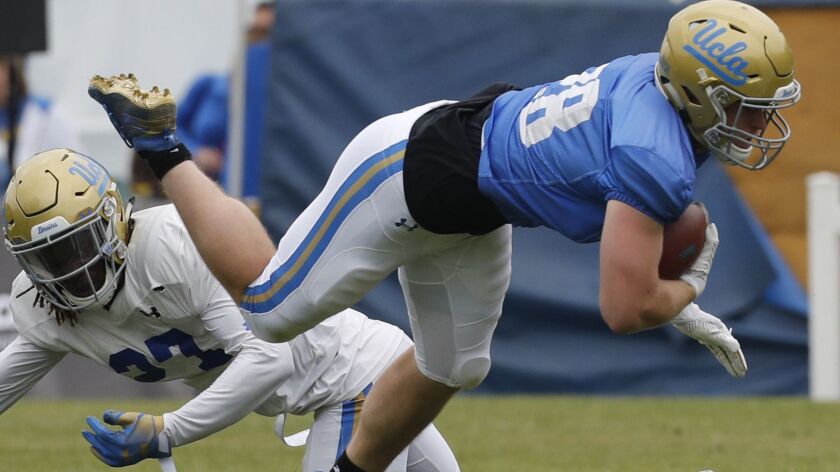 UCLA is undefeated when Cole Kinder has carried the ball, which may or may not be a coincidence.

“I don’t think it’s me,” Kinder said Monday with a chuckle, “but I’ll take the credit.”

Kinder is a walk-on who twice has been put in games to run out the clock. He got six carries against California last season at the end of coach Chip Kelly’s first victory with the Bruins and got four carries last week to help the team finish off a 34-16 triumph over Stanford.

Calling Kinder UCLA’s human victory cigar, however, doesn’t fully encapsulate his standing. Kelly said Kinder is the No. 3 running back in the rotation, trailing Joshua Kelley and Demetric Felton Jr. and positioned ahead of six scholarship players. Even considering that one of those players (Martell Irby) has been injured, another (Kazmeir Allen) has been sidelined because of academic issues and a third (Sitiveni Kaufusi) is a redshirt, it remains an impressive rise for Kinder.

The redshirt sophomore has shown in his limited carries the hard-charging form that made him Newport Harbor High’s all-time leading rusher. He ran for 33 yards against Stanford, averaging 8.2 yards per carry, while proving hard to tackle at 6 feet and 227 pounds.

“Cole is not a scrub,” linebacker Josh Woods said. “He can run really hard and I just love seeing him in the game. I was on the bench going crazy when Cole got in.”

Kinder has mostly played on special teams to help with kickoff coverage. When he made his first carries against Cal a year ago, the experience was so intense that Kinder found himself exhausted after only a handful of plays.

Those who meet Kinder for the first time often assume he’s from overseas because he speaks with what he has been told sounds like a Scottish accent.

“My accent is from nowhere — I’m actually from California,” said Kinder, who was born in Newport Beach.

Sometimes he’ll play along with the uninitiated, telling them he’s from Scotland for fun. He knows that may not always work.

“If I meet a Scottish person, they’ll be like, ‘No, you’re not,’ ” Kinder said of his attempts to pass himself off as an international man of mystery. “So I have to be careful because one time somebody started asking me questions about Scotland and I was like, oh, I’ve reached my limit.”

Kinder does enjoy forays into foreign territory on Wikipedia, where he spends hours scanning the pages of football leagues around the world, among other things. He hasn’t considered making a page for himself.

“It’s kind of like giving yourself a nickname; you really don’t want to do that,” Kinder said with a laugh, “but if I get desperate, maybe, you know?”

Woods, who’s widely considered one of the smartest players on the team, said he likes to engage Kinder on a variety of topics because he’s another brainiac. The only interaction Woods might enjoy more is watching his teammate run over defenders.

“We play for moments like that, to see guys like him get a shot and to do good,” Woods said. “That’s just the best part of football.”

Receiver Kyle Philips was selected the Pac-12 Conference’s freshman of the week for a second time this season after catching 10 passes for a career-high 100 yards against Stanford. Philips’ receiving yardage totals have risen in each of the last four games. ... Kelly said receiver Ethan Fernea was the only walk-on who has been awarded a scholarship this season. Even though the team has only 76 scholarship players, Kelly said he could not award more scholarships because the team has no senior walk-ons and he had to save additional scholarships for players in the incoming recruiting class. … Safety Quentin Lake continued to practice as a member of the scout team with his injured wrist tightly wrapped. … Defensive lineman Elijah Wade, recovering from an unspecified injury, worked off to the side with a trainer during the portion of practice open to the media. … Kelly said he had no update on target return dates for Allen or linebacker Bo Calvert (unspecified NCAA suspension).