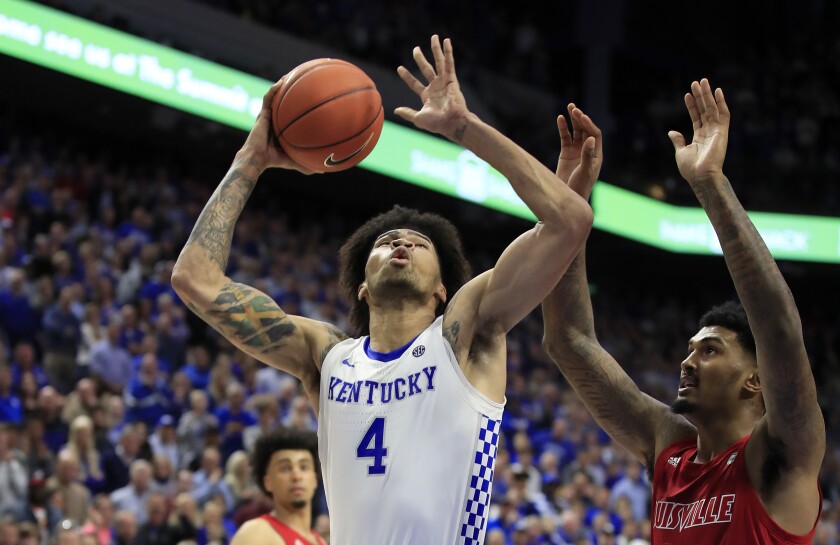 College basketball roundup: No. 19 Kentucky outlasts No. 3 Louisville in overtime

Nick Richards had 13 points, including seven consecutive in overtime, and No. 19 Kentucky scored the final eight points for a 78-70 victory over No. 3 Louisville on Saturday in a thrilling Bluegrass rivalry showdown in Lexington, Ky.

The Cardinals led 68-65 on Jordan Nwora’s three-pointer with 2 minutes 20 seconds left before Richards converted a three-point play to make it 70-68. The junior forward added another layup and two more foul shots before Immanuel Quickley and Tyrese Maxey provided a six-point cushion from the free-throw line. Ashton Hagans’ dunk with 4.9 seconds left sealed the tense win before 20,437 at Rupp Arena.

Maxey’s free throws capped a career-best 27-point performance and Richards grabbed 10 rebounds to help end a two-game losing streak by the Wildcats (9-3). Quickley had 18 points for Kentucky, which shot 46% for its 10th win over Louisville in 13 meetings.

“I just played smarter,” said Richards, who took a couple of charges in the extra session after his intensity put him on the brink of fouling out. “I noticed that when they were driving on me, they were lowering their shoulders on me, so I just tried to take charges on those.

“I was really happy that they called those charges. If [the official] had called a block, I don’t know what would have happened.”

at No. 15 San Diego State 73, Cal Poly 57: Malachi Flynn scored 14 points, and the Aztecs (13-0) overcame a slow beginning to beat the Mustangs (2-11) and continue their best start in nine seasons and remain one of three undefeated teams nationally.

Yanni Wetzell and Jordan Schakel added 12 points apiece for San Diego State. The Aztecs needed a 9-0 run at the end of the first half to take control against the scrappy Mustangs.

SDSU remains on its hottest start since 2010-11, when it opened 20-0 behind Kawhi Leonard and reached the Sweet 16 for the first time before finishing 34-3. San Diego State, Auburn and Liberty are the nation’s only undefeated teams.

Alex O’Connell added 14 points and Wendell Moore Jr. contributed 10 for the Blue Devils in their final nonconference game of the regular season.

Duke won its fifth consecutive game, all by at least 12 points, since its 150-game home winning streak against nonconference opponents ended against Stephen F. Austin on Nov. 26.

Quinones, who returned after missing the previous five games with a broken right hand, made all three of his three-point attempts as Memphis extended its winning streak to nine.

Bryce Nze had 10 points and seven rebounds for Butler, which has won three in a row.

Balsa Koprivica added 13 points and Trent Forrest had 10 points and six assists for Florida State, which has won seven of its games by 10 or more points. The Seminoles made 17 of 17 free-throw attempts.