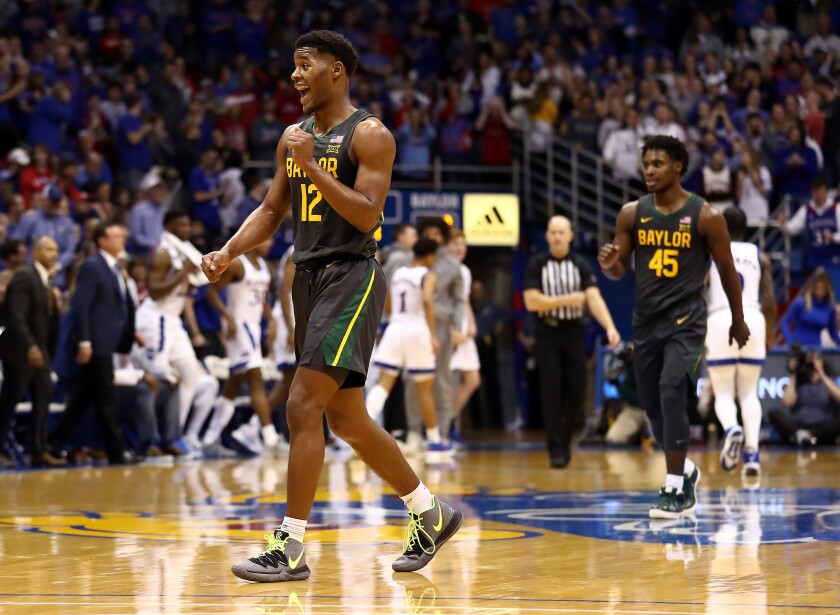 Baylor had spent more than five decades trying to win at Allen Fieldhouse in Lawrence, Kan.

The Bears had blown big leads and been blown out. They took in championship teams riding high and limped away feeling low. Their sense of confidence and optimism always was replaced by more disappointment and heartache.

All those years of angst made Saturday feel so much sweeter.

With dominant guard play from Jared Butler and MaCio Teague, a suffocating performance by the Big 12 Conference’s best defense and plenty of answers whenever Kansas tried to make a second-half run, the fourth-ranked Bears thumped the No. 3 Jayhawks 67-55 for their first victory in 18 tries on the hallowed hardwood of the Phog.

Teague added 16 points and Freddie Gillespie had 13 points for the Bears (13-1, 3-0 Big 12 Conference), who snapped a slew of ignominious streaks with their win in Lawrence. They beat a top-five team on the road for the first time in 22 attempts, won their fifth straight against a ranked team for the first time in school history, and, perhaps most importantly, they beat Kansas (12-3, 2-1) in their personal house of horrors for the first time after playing their first game in the building in 1966.

The loss also ended the Jayhawks’ 28-game home winning streak, the third longest in the nation.

“I knew at some point Baylor was going to win up here, and I was just hoping I would be a part of it,” Bears coach Scott Drew said. “Really pleased it was with this group because they’ve worked extremely hard.”

Isaiah Moss scored 15 points and Marcus Garrett had 11 for the Jayhawks, who lost leading scorer Devon Dotson to a hip pointer for a long stretch midway through the game, preventing them from finding any offensive rhythm.

Kansas was four for 15 beyond the arc and committed 14 turnovers that Baylor turned into 21 points.

at No. 7 San Diego State 83, Boise State 65: KJ Feagin scored 16 of his season-high 23 points in the first half, and the Aztecs played their best home game all season, opening with a 23-9 outburst and beating the Broncos.

Yanni Wetzell added 20 points, Malachi Flynn 19 and Matt Mitchell 10 for San Diego State (17-0, 6-0 Mountain West), which remained one of two unbeaten teams. Auburn is the other.

The Aztecs gave the sellout crowd at Viejas Arena plenty to cheer about.

Cassius Stanley added 16 points for Duke, which shot 53% from the field. Joey Baker and Jack White scored 11 points each, and Jordan Goldwire had 10 points for the Blue Devils.

at No. 5 Auburn 82, Georgia 60: Samir Doughty scored 17 points, and the Tigers shot 53% in a victory over the Bulldogs to preserve their unbeaten record.

Anfernee McLemore and freshman Allen Flanigan both scored 12 points for the Tigers. It was a career high for Flanigan. Doughty added six rebounds and four assists.

Bulldogs star freshman Anthony Edwards struggled much of the game but still finished with 18 points, nearly his season average.

at Indiana 66, No. 11 Ohio State 54: Devonte Green scored 19 points and Rob Phinisee added 13 in his first start of the season to help the Hoosiers beat the Buckeyes and send them to their fourth straight loss.

Reserve guard Ryan McMahon scored 17 points for Louisville, which won its second straight. Dwayne Sutton had 10 points and 14 rebounds. Sutton hit a pair of key three-pointers as the Cardinals rallied in the final 4:05.

John Mooney had 15 points and 19 rebounds for Notre Dame, which lost its second in a row.

Kentucky led by 15 early in the second half before a cold stretch allowed Alabama to climb to within 63-60 with just more than five minutes remaining. But Quickley stepped up down the stretch.

The Wildcats beat the Crimson Tide for the 12th time in 13 meetings despite shooting just 32% after intermission. Kentucky is 1,000-281 overall in SEC play.

Herbert Jones had 18 points for Alabama, and John Petty Jr. finished with 16.

Toppin got tangled with Samba Diallo at midcourt and went down hard at 15:13 of the second half. Coach Anthony Grant said it looks as if Toppin sprained his left ankle and “the next 24 hours will tell us more in terms of how it reacts.”

Bey, a 6-foot-8 sophomore forward, was 10 for 15 from the field, including eight of 10 on threes. Jeremiah Robinson-Earl scored 14 points and Collin Gillespie had 11 for Villanova.

West Virginia continued a remarkable turnaround by surpassing its wins total (12) from last season, when it finished last in the league.

Brandon Knapper added 10 points for the Mountaineers, who never trailed but allowed the Red Raiders to keep it close thanks to 19 turnovers and 12 missed free throws.

Davide Moretti led Texas Tech with 16 points. The Red Raiders have lost two straight, including a home loss to No. 4 Baylor on Tuesday night.

Syracuse scored 20 points in the extra period after netting just 19 in the second half. Freshman Joe Girard had 19 points for the Orange, and Elijah Hughes had 18.

Jay Huff had 16 points and 10 rebounds for Virginia, which lost back-to-back games for the first time since the 2016-17 season.

Brad Davison had 11 points and 13 rebounds for Wisconsin, which bounced back after losing 71-70 to Illinois on Wednesday night.

It was a successful start to a key stretch for the Badgers, who host No. 12 Maryland on Tuesday night and visit No. 8 Michigan State on Friday.

Lamar Stevens had 19 points and 13 rebounds for Penn State, which had won 13 in a row at home.