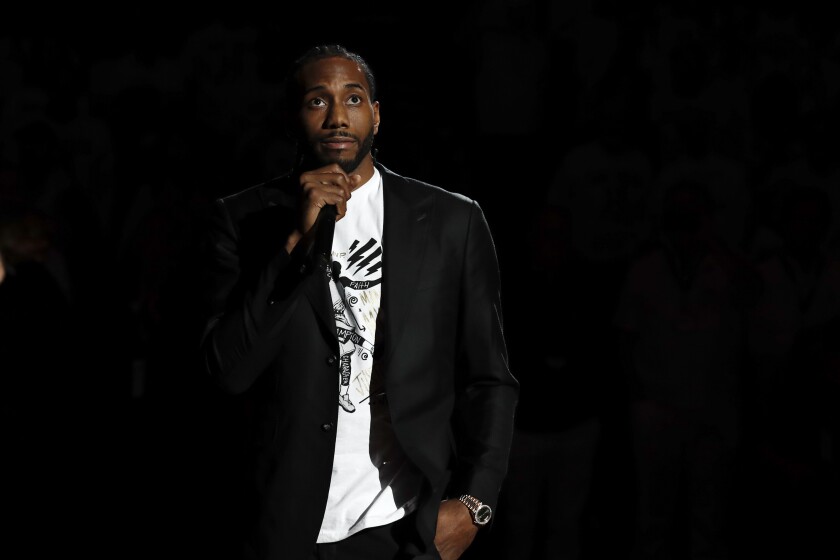 Moments after San Diego State retired Kawhi Leonard’s jersey at halftime, and with the No. 4 Aztecs trailing Utah State by eight points, coach Brian Dutcher joked with the NBA superstar.

The Aztecs did just that.

With Leonard watching from one baseline, another guy from Riverside, Matt Mitchell, scored 24 of his season-high 28 points in the second half — including three straight three-pointers — to help rally SDSU to an 80-68 victory Saturday night and remain the nation’s only undefeated team.

“What a great night for an Inland Empire kid to have a great game, Kawhi Leonard jersey hanging,” Dutcher said after the Aztecs extended the nation’s longest winning streak — and the longest in school history — to 23 games. “Matt stepped up and did it with Kawhi sitting there courtside watching him play.”

“There’s definitely significance there,” said Mitchell, a junior forward. “Me having a big night and Kawhi’s big night, I feel like that’s very special and I’m happy I was able to show up tonight. At the same time, it’s a team sport and my teammates found me tonight, and on another night it would be another one of my teammates.”

Yanni Wetzell then had a steal and layup, and Mitchell made two free throws to extend the lead to five.

Utah State (17-7, 6-5) ended a two-minute scoring drought on Sam Merrill’s three-pointer. Utah State tied it at 54 on Merrill’s jumper, but Mitchell hit two free throws to give SDSU the lead.

Wetzell later hit a three, and Mitchell hit a jumper to just beat the shot clock, and then drained a three for a 66-58 lead.

“He got us going, and he willed us to the win tonight,” guard KJ Feagin said.

Malachi Flynn and Feagin scored 13 each, and Wetzell had 11 points and 10 rebounds.

Merrill had 16 points and Brock Miller 15 for Utah State.

Teague made consecutive three-pointers in a 36-second span to cap a 14-0 run in the first half that put Baylor ahead to stay. He hit two more threes early in the second half before TCU made a run.

Desmond Bane, the Big 12’s second-leading scorer at 16.5 points per game, scored all 14 of his points after halftime. During a 13-2 run by the Horned Frogs, Bane scored six in a row before a dunk by PJ Fuller got them within six at 51-45 with 8½ minutes left. That was the closest they would get.

Baylor guard Jared Butler, who was the league’s fourth-leading scorer at 15.4 points per game, missed his first six shots and was scoreless before the break. He finished with 10 points on three-of-12 shooting.

Khalil Shabaaz made a three-pointer with six seconds left to make it a two-point game in a furious, back-and-forth finish — and that described most of the second half. Admon Gilder made two free throws with 3.6 seconds left to seal the win.

Filip Petrusev had 23 points and 11 rebounds playing in foul trouble and Drew Timme scored 19 for the Zags, who ran their WCC regular-season winning streak to 36 games for the longest such unbeaten run in the nation for a conference. USF (16-8, 5-4) had won its last two games.

Kansas led 76-75 with 14 seconds to play before Ochai Agbaji knocked down two free throws. Texas Tech was unable to come away with a basket to complete the upset.

No. 5 Florida State 74, at Virginia Tech 63: Devin Vassell tied an Atlantic Coast Conference record by shooting seven for seven from three-point range and scored 27 points to lift the Seminoles (18-3, 8-2) over the Hokies (14-8, 5-6) in Blacksburg, Va.

Vassell helped Florida State rebound from Tuesday night’s loss at Virginia that snapped a 10-game winning streak. The Seminoles remained a game out of first place in the ACC standings.

Jordan Nwora added 14 points for Louisville, which maintained its hold on the ACC lead with its eighth straight win. The Cardinals led by 17 points late in the first half and responded to a Wolfpack run midway through the second half by pushing the margin right back out to 15 points.

Jalen Cobb had 22 points for Fordham.

Ty-Shon Alexander added 16 points and Marcus Zegarowski scored 13 for Creighton, which was won four in a row while avenging a 64-59 home loss to Villanova on Jan. 7.

Collin Gillespie and Justin Moore each had 18 points for the Wildcats, who had won seven in a row.

It was a crucial game for Syracuse, which saw its five-game winning streak end on the road at Clemson on Tuesday night and needed a signature victory to bolster its resume for consideration for the NCAA tournament.

Naji Marshall added 19 points and KyKy Tandy had 14 as Xavier beat Seton Hall in every phase of the game.

Quincy McKnight led the Pirates with 15 points before having to leave with an injury to his left knee with 6:02 to play.

Huggins earned his 877th career win to move past Kentucky’s Adolph Rupp into seventh place in Division I.

West Virginia bounced back from a loss at Texas Tech on Wednesday, improved to 11-0 at home and ended a three-game losing streak to Kansas State.

Isaac Okoro made a key three-pointer and scored 14 points for Auburn, which dominated the final four minutes.

It wasn’t nearly as big as the Tigers’ 77-71 overtime victory over Kentucky that vaulted Auburn to its first Final Four last season, but it moved the Tigers into a tie for second place in the SEC.

Wisconsin earned the victory despite missing guard Brad Davison because of a suspension. The Badgers also lost Kobe King, the team’s second-leading scorer, when he announced this past week that he intended to transfer.

Cassius Winston scored 23 points and Rocket Watts had 16 for Michigan State, which has lost three of its last four Big Ten road games.

Providence snapped a three-game losing streak by beating a ranked team for the first time since March 19, 2018. It was also its first road win over a team in the Associated Press top 25 since Feb. 22, 2017.

Kamar Baldwin finished with 14 points and Justin Tucker had 12 points and eight rebounds to lead Butler. The Bulldogs have lost two of their last three home games.

at Cincinnati 64, No. 21 Houston 62: Keith Williams scored 10 of his 12 points in the second half, and the Bearcats (14-7, 7-2 American Athletic Conference) rallied from a 15-point deficit in the second half to beat the Cougars.

Williams scored on a floater with 2:02 left, giving Cincinnati its first lead, 61-59, since the Bearcats led 8-5. Williams followed with two free throws, generating roars from the sellout crowd of 12,189.

Houston already was struggling from the field in the last part of the second half when point guard Dejon Jarreau drew a technical foul and was ejected when the referees ruled that he bit Cincinnati’s Mamoudou Diarra with 6:16 left in the game.

Marlon Tayor had 13 points and 11 rebounds and freshman Trnedon Watford scored 13 points for LSU, which is off to its best start in conference play in 39 years.

Devontae Shuler scored a career-high 28 for Ole Miss, which lost two straight and eight of its last nine.

at Tulsa 54, No. 23 Wichita State 51: Elijah Joiner caught an inbound pass with 3.3 seconds left and raced from one key to the next, connecting on a three-pointer as time expired to give the Golden Hurricane (15-6, 7-1 American Athletic Conference) a victory over the Shockers (17-4, 5-3) in Tulsa, Okla.

Hundreds of fans in the near-sellout crowd of 8,089 stormed the court in a wild celebration after Tulsa toppled another ranked visitor. In its previous home game, the Hurricane routed then-No. 20 Memphis 80-40.

Joiner shot five for six on threes and scored 22 points for Tulsa, which won its sixth in a row. Jaime Enchinique scored 15 for Wichita State.

Nebraska lost its seventh in a row as season scoring leader Cam Mack was held without a point for the first time this season.

Jon Teske added 14 points as Michigan improved to 12-0 against Rutgers, including a victory in the 1976 Final Four.