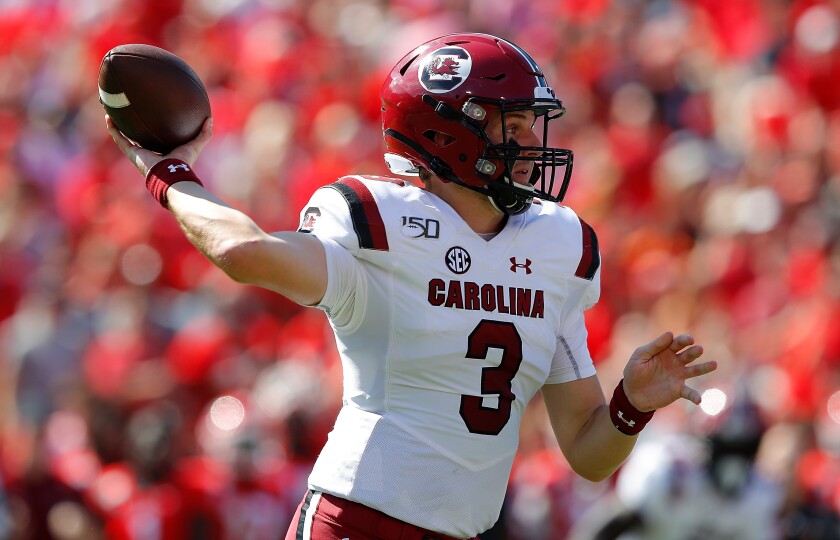 With 18- to 21-year-olds, so much comes down to which group will be emotionally ready on game day. This one should be a fascinating one to watch for that reason. Florida is coming off a rip-roaring defeat at Louisiana State that showed the Gators can compete with anyone but also probably eliminated them from playoff contention.South Carolina is coming off a gutsy overtime road win at Georgia that shocked the college football world. Now Florida goes on the road to Columbia, where it will have to prove that it’s simply better than South Carolina. Maybe the Gators will catch the Gamecocks still in celebration mode.

Some luster came off this Pac-12 North showdown when the Huskies surprisingly lost to California and Stanford. But don’t think for a second this isn’t the most important game on the Ducks’ schedule. For one, it’s in Seattle, and a win at Husky Stadium would be a significant step for Mario Cristobal’s program in Year 2. Secondly, Washington stole a win in Eugene last season, a result that helped the Huskies win the conference and a spot in the Rose Bowl. Oregon would be a playoff contender if it had held on against Auburn in the opener. Washington, even with a highly regarded quarterback like Jacob Eason, still can’t get its offense going.

Matt Rhule has done a tremendous job getting Baylor football back to a competitive place, but are the Bears really a top-20 team? They haven’t played a tough schedule to this point, and Oklahoma State in Stillwater represents by far their biggest test of the season. Oklahoma State’s offense hasn’t fully realized its potential with redshirt freshman Spencer Sanders running the show. Having one of the nation’s best tailbacks in Chuba Hubbard certainly helps. If Sanders can hit some big plays in the passing game to star receiver Tylan Wallace, it will open things up for Hubbard to run wild.

How did this game, which very likely could determine who wins the Pac-12 South Division, end up on the Pac-12 Networks where millions of potential viewers won’t get to tune in? It’s a big missed opportunity for both teams.Regardless, for those who will have the ability to watch, this game should be a defensive battle that will be won by the team that can best establish its star running back. Who will have the bigger day, Arizona State’s Eno Benjamin or Utah’s Zack Moss? The Pac-12 would benefit from Utah and Oregon winning Saturday and vaulting closer to top-10 status, building up to a potential league title game with real national ramifications.

Under Jim Harbaugh, Michigan has never won as an underdog, going 0-7. To this point in 2019, there has been little reason to believe that is going to change on Saturday night in a “white-out” atmosphere in Happy Valley. The Wolverines just can’t get out of their own way. They’ve fumbled the ball 17 times, losing nine. Michigan has three NFL-caliber wide receivers, none of whom lead the team in receiving yards. The defense appears to be rounding into form, but can it get any help from Shea Patterson and the offense? Under James Franklin, Penn State is 1-4 against Michigan and 3-12 against the Wolverines, Ohio State and Michigan State.