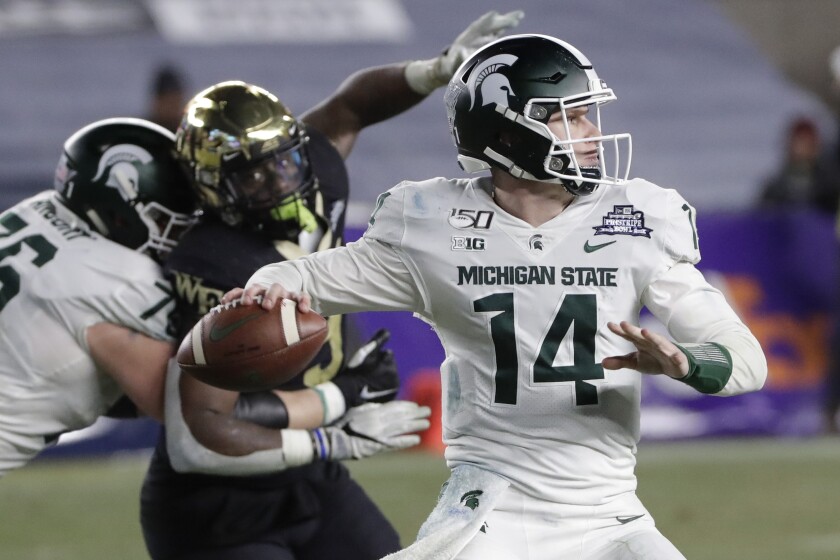 Brian Lewerke threw for 320 yards and a touchdown and ran for a score in Michigan State’s 27-21 victory over Wake Forest on Friday night in the Pinstripe Bowl at Yankee Stadium in New York.

Lewerke threw a 10-yard pass to wide receiver Cody White in the third quarter to put the Spartans (7-6) ahead 27-21, and they survived down the stretch to give embattled coach Mark Dantonio his sixth bowl victory.

“When you’re a senior and you play your last football game, you want it to be your best,” Dantonio said of Lewerke.

Michigan State tried to give away the game twice in the fourth quarter, the first time on Lewerke’s shovel pass to tight end Trenton Gillison inside the 10-yard line that was stripped and recovered by linebacker Ja’Cquez Williams at the six.

The Deamon Deacons failed to score on the drive and handed Michigan State another chance to seal the victory. Again, the Spartans couldn’t put it away when Matt Coghlin was wide left on a 28-yard field-goal attempt with 3:03 left. Wake Forest’s last chance ended on an incomplete pass on its own 16.

“As the game progressed, we got more confident, we got stronger,” Dantonio said. “I think that was the difference, our attitude.”

Burly Spartans defensive tackle Mike Panasiuk rumbled 14 yards on an interception return late in the first quarter for his first career touchdown. His brother, Jacub, triggered the pick when he swatted the ball at the line. It took a bounce off a fallen player and into Panasiuk’s hands.

Dantonio said he would play mutliple quarterbacks to give the program a better feel for what it had on the depth chart to work with next season. But Michigan State stuck with Lewerke, in his fifth year and making his 38th career start, and he responded in the clutch when he connected with White. Lewerke passed Connor Cook (9,403) to become Michigan State’s career leader in total offense and was the bowl MVP.

Jamie Newman did all his damage for the Demon Deacons in the first half, throwing three touchdown passes for a 21-20 halftime lead. Newman, the MVP of last season’s Birmingham Bowl, hit Kendall Hinton with a 29-yard scoring strike on Wake Forest’s opening drive, and wide receiver Donavon Greene made a sensational one-handed scoring catch early in the second quarter for a 14-10 lead.

Newman connected with Jack Fruedenthal on a 44-yard play that again gave Wake Forest the lead, at 21-17.

Michigan State President Samuel Stanley, just five months on the job, gave a vote of confidence to Dantonio. Dantonio’s 114 wins are the most in Spartans history.

“I think Coach Dantonio has really an incredible track record,” Stanley said. “He’s the winningest coach in MSU history. So I am pleased with the direction of the program overall. The season was not what we hoped for last year, there’s no question, but I think he is the right person to continue.”

Air Force 31, Washington State 21: Kadin Remsberg ran for 178 yards and stretched to the pylon for a three-yard touchdown late in the fourth quarter, lifting the Falcons to a victory over the Cougars in the Cheez-It Bowl in Phoenix.

Air Force (11-2) had its triple option working to near perfection, grinding out 371 yards rushing while setting a Cheez-It Bowl time of possession record of 43:24.

Donald Hammond III scored two touchdowns and Remsberg had his fourth-down touchdown confirmed by review to help the Falcons close the season on an eight-game winning streak.

Anthony Gordon, the Football Bowl Subdivision passing leader, kept the Cougars within reach, throwing for 351 yards and three touchdowns. He hit Brandon Arconado on a 13-yard touchdown early in the fourth quarter to pull Washington State (6-7) within 24-21, but the Cougars had no answer for Air Force’s triple-option attack.

Texas A&M 24, Oklahoma State 21: Quarterback Kellen Mond rushed for a career-high 117 yards and threw a touchdown pass as the Aggies scored 24 straight points to overcome an early deficit and beat the Cowboys in the Texas Bowl in Houston.

Mond ran 67 yards to give Texas A&M (8-5) a 21-14 lead early in the fourth quarter. Mond cut to the right to avoid a couple of defenders and outran everyone else. Tre Sterling had a shot to tackle him around the 25-yard line, but Mond ran away from his diving attempt.

Oklahoma State (8-5) went for it on fourth and one from the Texas A&M 34 on its next possession, but Spencer Sanders was stopped for no gain.

The Aggies added a 24-yard field goal to make it 24-14 with about three minutes to go.

“After a really poor start, we were able to come out in the second half as an offense and make a lot of big plays,” Mond said.

Oklahoma State cut the lead to three on a touchdown reception by Braydon Johnson with about a minute left. The Cowboys attempted an onside kick, but the Aggies recovered it to secure the victory.

Chuba Hubbard, who finished the regular season as the nation’s leading rusher, ran for 158 yards, and Johnson had 124 yards receiving and two touchdowns for the Cowboys.

Hubbard finished the season with 2,094 yards rushing to become the second player in school history to reach 2,000, joining Barry Sanders, who did it in 1988 when he won the Heisman Trophy. Sanders tweeted congratulations to Hubbard after he reached the mark and said: “I know the effort it takes to get there.”

North Carolina 55, Temple 13: Having guided North Carolina to a winning season and a lopsided bowl victory in his first year back at the school, Mack Brown has raised expectations — for himself and the fans — moving forward.

The veteran coach wouldn’t have it any other way.

Freshman Sam Howell threw for 294 yards and three touchdowns in addition to catching a touchdown pass, and the Tar Heels blew out the Owls in the Military Bowl in Annapolis, Md., to cap a satisfying return season for their 68-year-old coach.

Howell completed 25 of 34 passes and ran for 53 yards in three carries to help the Tar Heels (7-6) secure their first bowl victory since 2013. North Carolina was 4-6 before winning its last two regular-season games to qualify for a bowl bid.

The Tar Heels went 3-9 in 2017 and 2-9 last year before hiring Brown, who coached North Carolina from 1988 to 1997 before heading to Texas for a 16-year stay. Coming off a five-year absence from coaching, Brown — with help from Howell — quickly turned the program around.

“The last three weeks, we’ve been a really good football team,” Brown said. “It’s fun. Now these guys coming back have something to build on.”

Temple (8-5) has played in a bowl game in each of the last five years — and lost four of them.