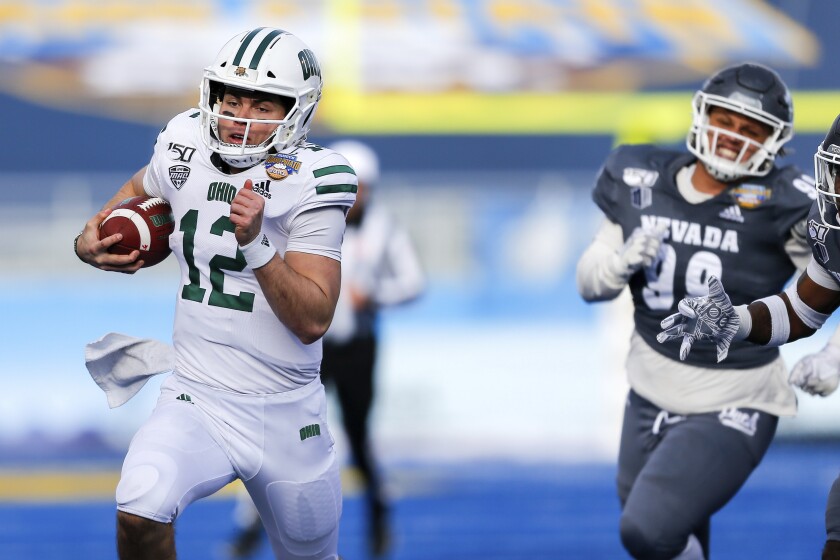 Quarterback Nathan Rourke accounted for 241 yards of offense and ran for a touchdown to help Ohio beat Nevada 30-21 on Friday in the Famous Idaho Potato Bowl.

Nevada (7-6), which dismissed defensive coordinator Jeff Casteel and two other defensive position coaches at the end of the regular season, didn’t find much of an answer for Ohio’s high-powered offense until the fourth quarter.

The Wolfpack also were missing three key defensive starters, suspended for their participation in a fight in a loss to rival Nevada Las Vegas in the regular-season finale.

Ohio raced to a 20-9 lead and scored the first 10 points of the third quarter before holding off Nevada’s late rally.

The Bobcats lost leading rusher O’Shaan Allison late in the first quarter with an undisclosed injury. De’Montre Tuggle took over, rushing for 97 yards and a touchdown to spark a ground attack that finished with 285 yards in 50 carries spread among five players.

Rourke, who is projected to be a high first-round draft pick in the Canadian Football League, tied Kareem Wilson’s school record for career rushing touchdowns of 49. Wilson played from 1995 to 1998.

The Bobcats will have a big question next season at quarterback with Rourke graduating, but there are plenty of reasons to think Ohio will be a serious contender for the MAC title. Losing just two starters on offense and three on defense, the Bobcats will be one of the most experienced returning teams in the conference.

The Wolfpack will also enter next season with high hopes with coach Jay Norvell entering his fourth season with a bevy of returnees, including quarterback Carson Strong, who finished with more than 2,000 yards passing, and leading wide receiver Elijah Cooks.