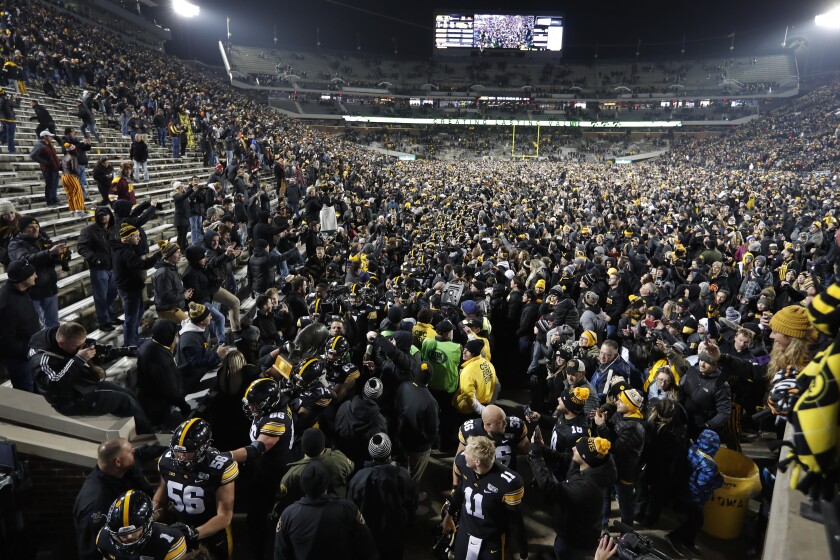 Tua Tagovailoa sustained a season-ending hip injured being dragged down late in the first half on what was likely his final series of the day in No. 4 Alabama’s 38-7 victory over Mississippi State on Saturday.

Tagovailoa was injured after a scramble when he was tackled from behind by Bulldogs linebacker Leo Lewis. The star quarterback needed help getting to his feet and was carted off the field with 3:01 left in the second quarter.

The junior had been nursing an ankle injury that needed surgery four weeks ago and caused him to miss a game and a half. Alabama coach Nick Saban said the injury Saturday was unrelated to the ankle. Saban called it a “freak injury.” Saban told ESPN at halftime the plan was to remove Tagovailoa from the game before the series when the quarterback was injured. Alabama was already up 35-7, but it was decided to let Tagovailoa play one possession to get some work in the two-minute drill.

Tagovailoa was flown by helicopter to the St. Vincent’s Medical Center in Birmingham, Alabama, and was ruled out for the season Saturday night.

Tagovailoa was 14 of 18 for 256 yards and two touchdown passes against Mississippi State, giving him 31 TD passes on the season. He was replaced in the second half by Mac Jones, who went 7 for 11 for 94 yards.

The Crimson Tide (9-1, 6-1 Southeastern Conference) were coming off a 46-41 loss to LSU that nudged it out of College Football Playoff position to fifth in the latest selection committee rankings.

The Hawkeyes (7-3, 4-3 Big Ten) struck quickly, scoring touchdowns on their first three possessions, then held off Minnesota’s charge in the second half for their first victory over a ranked opponent this season.

Minnesota got to 23-19 with 3:27 to play when Rodney Smith scored on a 1-yard dive. But Brock Walker’s extra-point attempt missed. Iowa’s Nate Wieting then recovered the onside kick.

The Gophers had a final chance. But quarterback Tanner Morgan was sacked by Joe Evans and A.J. Epenesa on back-to-back plays, then backup Cole Kramer’s pass was intercepted by Riley Moss on fourth down.

Oklahoma erased a three-touchdown halftime deficit and tied it at 31 on Hurts’ 2-yard TD pass to Brayden Willis with 5:25 left.

Joe Burrow threw for 489 yards and five touchdowns and LSU built a big lead and held off host Mississippi.

The teams combined for 1,328 yards of total offense, including 714 by the Tigers. Burrow enhanced his Heisman Trophy front-runner status, completing 32 of 42 passes, including touchdown passes of 34, 51 and 61 yards to Ja’Marr Chase (227 yards) and 12 and 7 yards to Justin Jefferson (112 yards).

Burrow completed 17 consecutive passes at one point to set a school record. He threw two interceptions in the second half as Ole Miss climbed closer, but put the game away with a 61-yard touchdown pass to Chase with 5:11 remaining.

Ole Miss freshman quarterback John Rhys Plumlee had 212 yards rushing yards, a school record for a quarterbacks, and three touchdowns and was 9 of 16 passing for 123 yards.

Justin Fields threw for a career-high 305 yards and matched his best with four touchdown passes to lead Ohio State past Rutgers at Piscataway, N.J.

Favored by a whopping 51 points, the Buckeyes (10-0, 7-0 Big Ten) rolled to their 16th straight win over the past two seasons. J.K. Dobbins ran for two touchdowns and cornerback Shaun Wade set up two early TDs with an interception and a forced fumble.

Isaih Pacheco scored on a 26-yard run, Johnny Langan threw a 45-yard scoring pass to Bo Melton and ran a yard for another touchdown with 1:09 left for Rutgers (2-8, 0-7). The loss was the 19th straight conference game for Rutgers, which fired coach Chris Ash in late September.

Lawrence, the 6-foot-6 sophomore, left in the third quarter, finishing 21 of 27 for 272 yards. Travis Etienne ran for 121 yards, his sixth consecutive game with 100 or more yards and his seventh this season.

Georgia held on to become the first team to win three consecutive SEC East titles since Florida won five in a row from 1992-96.

Fromm was 13-of-28 passing for just 110 yards, but had a 51-yard touchdown pass to Dominick Blaylock and a pair of 5-yarders to Eli Wolf and Brian Herrien. Swift ran for 106 yards on 17 carries.

Justin Herbert threw for 333 yards and four touchdowns and host Oregon won its ninth straight game and secured a spot in the Pac-12 championship game with a victory over Arizona.

Graduate transfer Juwan Johnson caught five passes for 93 yards and a score for the Ducks (9-1, 7-0 Pac-12). Oregon hasn’t won seven straight in conference play to start a season since 2012, and no Pac-12 team has started 7-0 in league play since Stanford in 2015.

The Ducks, ranked sixth in both the College Football Playoff rankings and the AP Top 25, haven’t dropped a game since the season-opening loss to Auburn.

With the victory, Oregon secured the Pac-12 North title and the berth in the conference championship game on Dec. 6 in Santa Clara, California. The Ducks’ opponent from the league’s South Division has yet to be determined.

The loss slimmed Arizona’s chances of bowl eligibility. At 4-6 overall and 2-5 in conference, the Wildcats face No. 8 Utah (No. 7 CFP rankings) next Saturday before closing out the season at rival Arizona State.

Kyle Trask threw two touchdown passes after a sluggish first half for Florida at Columbia, Mo.

Trask completed 23 of 35 passes for 282 yards. That was plenty of offense for Florida (9-2, 6-2 Southeastern Conference), which held Missouri to 204 total yards. Linebacker Jon Greenard had two sacks and five tackles for loss.

The Tigers (5-5, 2-4) have lost four straight games and haven’t scored a touchdown in the last two.

Michigan State got off to a solid start, leading 7-0 after the first quarter on Brian Lewerke’s 1-yard pass to Max Rosenthal.

The offensively challenged Spartans did little with the ball and simply couldn’t stop Michigan in the air.

Ronnie Bell had nine catches for a career-high 150 yards for the Wolverines.

Taylor became the first Football Bowl Subdivision player since at least 2000 to run for 200 yards three times against the same team, according to Sportradar. He had 221 against the Cornhuskers last year and 249 in 2017. The junior had his 11th 200-yard game, moving into a four-way tie for most in a career by an FBS player.

The Badgers (8-2, 5-2 Big Ten, No. 14 CFP) quickly erased a 14-10 deficit in the second quarter. Jack Coan threw over the middle to A.J. Taylor, who spun away from two defenders and ran the rest of the way untouched for a 55-yard touchdown. Wisconsin linebacker Jack Sanborn intercepted a tipped ball on the first play of Nebraska’s next series, and Taylor ran in from the 1 to finish a short drive that put the Badgers ahead 24-14.

The 17th straight home victory for Brian Kelly’s Fighting Irish did not sell out Notre Dame Stadium. It was the first time since 1973 Thanksgiving Day against Air Force, a string of 273 sold-out games. A crowd of 74,080, 3,542 below capacity, saw Notre Dame win for the 79th time in the 93-game series that has been played continuously since 1927.

Claypool caught seven passes for 117 yards with scoring receptions of 7, 47 and 3 yards from Book to give the Irish a 21-0 lead early in the second quarter. Book threw a 70-yard touchdown pass to sophomore Braden Lenzy later in the quarter as Notre Dame took a 38-3 halftime lead and then hit Claypool with a 20-yard scoring pass on their final play of the game together.

Sam Crosa kicked a 37-yarder field goal as time expired to give visiting Cincinnati at least a share of the American Athletic Conference East division title.

The Bearcats (8-1, 6-0, No. 17 CFP) rallied from a 10-point halftime deficit to win for the eighth straight time, getting touchdown runs from Michael Warren and Gerrid Doaks before Desmond Ridder led an 11-play, 60-yard drive to win the game. USF’s Spencer Shrader missed a 33-yard field goal that would have given the Bulls (4-6, 2-4) the lead with 2:07 remaining.

Ridder was just 9 of 18 passing for 78 yards, but he had a pair of big third-down completions on the winning march — the last a short flip to Warren, who rambled 30 yards to the USF 40. Warren ran for 11 yards on the play and finished with 134 yards rushing on 24 carries.

Jordan McCloud threw for 267 yards and one touchdown for USF, which led 10-0 at halftime. The Bulls clung to a 17-10 advantage entering the fourth quarter, but couldn’t put the Bearcats away.

Brady White threw for 341 yards and five touchdowns and ran for another score and Memphis overcame a 10-point first-quarter deficit to beat host Houston,

Jaylon Henderson threw for 292 yards and three touchdowns, Sonatane Lui had two fumble recoveries, including one for a score, and host Boise State beat New Mexico.

Boise State (9-1, 5-0, No. 21 CFP), which maintained its one-game lead atop the Mountain Division, raced out to a 28-0 lead in the first quarter and was never seriously challenged. It was the first time the Broncos scored that many points in the first quarter since registering 28 against Idaho on Nov. 12, 2010.

New Mexico (2-8, 0-6) was playing for the first time since defensive lineman Nahje Flowers died on Nov. 5. The Lobos’ game with Air Force was postponed last weekend to allow the team time to grieve Flowers’ death.

Brayden Narveson missed an apparent 42-yard field goal with 2:12 to go, but Texas was called for being offside and Iowa State was awarded a first down by inches.

Sam Ehlinger passed for 273 yards and three TDs for Texas, losers of three of its last five.

Dillon Stoner caught five passes for a career-high 150 yards and two touchdowns and Spencer Sanders passed for 168 yards and a touchdown for the Cowboys (7-3, 4-3 Big 12, No. 22 CFP). Oklahoma State gained 481 total yards, including 243 rushing.