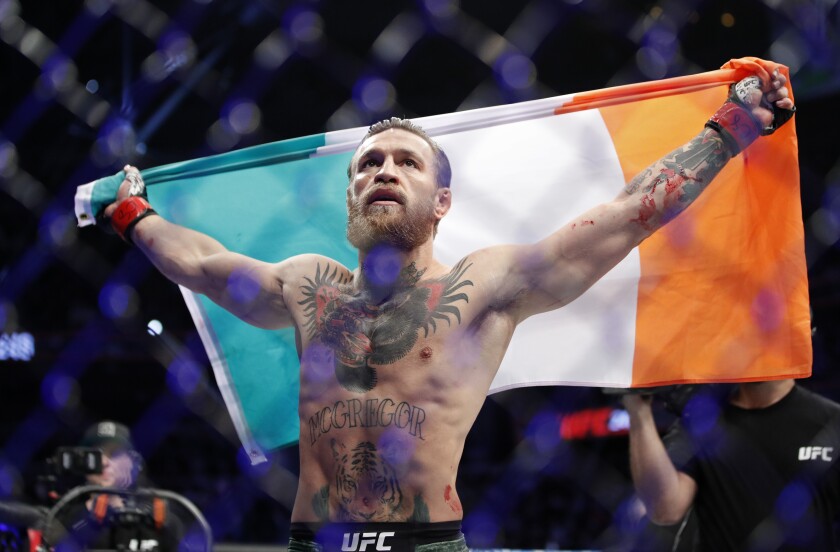 Column: A changed man outside the Octagon, Conor McGregor dominates inside it in UFC return

The high-water mark of Conor McGregor’s UFC career came a little more than three years ago at Madison Square Garden when he defeated Eddie Alvarez to become the first fighter in the promotion’s history to hold titles in two divisions simultaneously.

After his historic victory he stood in the center of the octagon with a championship belt draped over each shoulder and said, “I would like to take this chance to apologize … to absolutely nobody!”

It was an iconic moment for the famously unapologetic McGregor. It’s also a reminder of how much McGregor has changed.

Going into Saturday’s fight against Donald “Cowboy” Cerrone at T-Mobile Arena, a calmer McGregor complimented his opponent, shook his hand multiple times and was genuinely apologetic for being tardy to Friday’s weigh-in.

“I apologize I’m a little bit late,” McGregor said. “It’s hard work getting the kids ready and bringing them to the events. So thank you all for your patience.”

As much as McGregor has changed outside the octagon, he gave fans a glimpse of the old McGregor inside of it Saturday with a technical knockout of Cerrone in 40 seconds. McGregor stunned Cerrone by repeatedly driving his left shoulder into the veteran challenger’s nose during a clinch, caught him with a kick to the jaw, then finished him with strikes.

After a 15-month layoff, McGregor returned with one of his most dominant performances and put himself in position for another fight perhaps as early as March 7 at UFC 248 in Las Vegas. Or he could get a rematch with Khabib Nurmagomedov, if Tony Ferguson isn’t able to face the lightweight champion at UFC 249 on April 18 in Brooklyn.

“He doesn’t believe the Khabib-Ferguson fight is going to happen,” UFC boss Dana White said. “He wanted this fight at 170 so then he’ll be ready for that. Conor has been right about a lot of things, so we’ll see.”

McGregor has become a father — his son, Conor Jack McGregor Jr. was born in 2017 and his daughter, Croia, was born last year — and started his own Irish whisky company since his previous UFC victory in 2016. He lost to Floyd Mayweather Jr. in his first and only boxing match in 2017 and lost to Nurmagomedov in 2018.

McGregor rededicated himself during training for the Cerrone fight. He gave up alcohol and woke up early, which was once unthinkable for a fighter infamous for drinking, staying out late and sleeping in even during fight week.

“It happened naturally, to be honest,” McGregor said. “With the kids, I couldn’t stay up late and stay in bed. The kids would be running around and jumping on me. ... So I have my breakfast, play with the kids and about two hours after breakfast, I have my first training session.”

“This is guy is a massive superstar,” White said. “He’s not just the biggest star in MMA, he’s one of the biggest stars ever in the history of combat sports. I put him up there with Mike Tyson and Sugar Ray Leonard.”

There was some doubt whether McGregor would return to the UFC as he dealt with a string of legal issues, including pleading guilty to two assault cases and being the subject of two sexual assault allegations (he is being investigated but has not been charged). McGregor said, “I have done nothing wrong” when asked about the allegations but acknowledged the last 15 months helped him mature.

“I’m certainly more grown and more experienced and I’ve been through certain things that have helped shape me as a man like us all on this journey of life,” he said. “But if you were to ask my family and the people who know me, I am no different. Inside I’m still the same young kid that I always was. I’m a passionate young man reaching for the stars and aspiring to do things that have never been done before.”

Though the cocky and brash McGregor fans grew to know and love has grown into a more mature McGregor, he said it’s for the best.

“I want to be the best version of myself,” McGregor said. “Everyone says they want the old Conor, the 2016 Conor, the Conor that fought Eddie, but I feel I’m in a better place than that. … Sometimes we have to go to certain places in our life to realize what we need to do and I’ve certainly turned over a new leaf.”