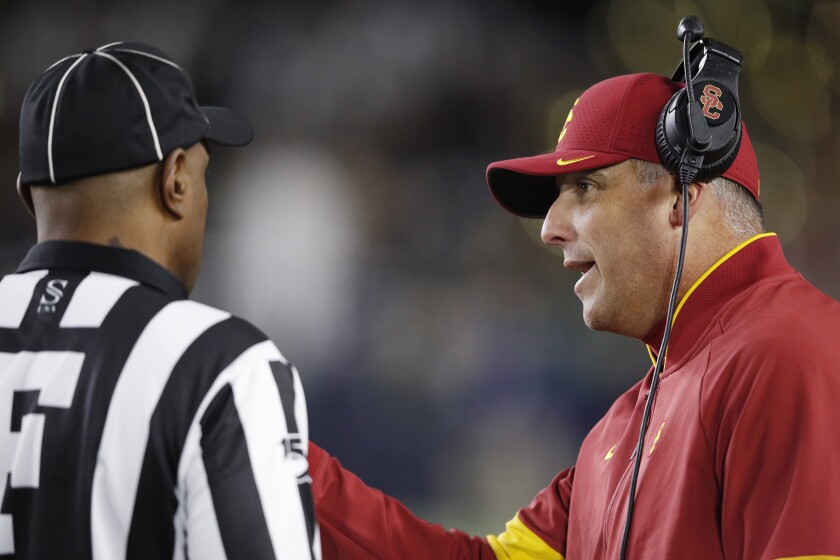 Column: After USC’s latest loss, how long before the other shoe might drop for Clay Helton?

USC football coach Clay Helton kept hold of his job but lost one of his shoes, though there surely are fans and alumni who wish that would have happened the other way around.

A few days ago, USC interim athletic director Dave Roberts told The Times’ Ryan Kartje that if a coaching decision were to be made, “It would probably be the province of a new athletic director, not Dave Roberts.” He said Helton will “stand or fall on his record,” and added that unless something extraordinary happened, “Dave Roberts isn’t going to be stepping in there, making the decision that really I think would be the province of a new AD.”

Quite the week of debatable decision-making by people named Dave Roberts, wasn’t it?

While the search chugs along for the new athletic director who, presumably, will determine Helton’s coaching fate, Helton was pacing the sideline Saturday, overseeing a valiant but inadequate second-half surge in the Trojans’ 30-27 loss to ninth-ranked Notre Dame at chilly South Bend.

The loss of his footwear occurred when he tried to break things up after the teams got into a pushing-and-shoving scrum at the end of the second quarter and he somehow came out of it minus his left shoe. As the teams went to their locker rooms at halftime, the official on the field announced unsportsmanlike conduct penalties had been called against Notre Dame and UCLA. Fans loved that, chanting, “UCLA!” in the final minutes.

Helton got a new shoe for the second half and a new game plan. The Trojans corrected some errors, got some big plays Helton called “explosives,” and got the ball to a determined Markese Stepp for 43 of his 82 yards rushing and the two-yard touchdown run that capped a frantic push with 1 minute 4 seconds left in the fourth quarter. Notre Dame recovered the onside kick and held on.

“This team had a bite,” Notre Dame coach Brian Kelly said after offering his respects to Helton following the 91st edition of the teams’ rivalry game. “Clay had them playing very well. To win against your rival is one of the things we wanted to do.”

USC wanted to do the same thing but too often fell one flailing tackle short, one key block short, one big-yardage play short of making it happen. That’s nothing new.

“I asked them to stay in the fight for 60 minutes and they did,” Helton said, which is some consolation but ultimately, the results matter and the results this season haven’t been good enough.

Asked whether he thought his team should have won Saturday, Helton was honest.

This loss was too close to qualify as the “something extraordinary” that might lead Roberts — the USC executive who oddly referred to himself in the third person, not the Dodgers manager — to fire Helton in the short-term future. Their second-half pushback means they’re still playing for Helton and for one another, and they took pride in that.

“The second half, you see 11 people do their job, that’s what it looks like,” offensive coordinator Graham Harrell said. “I’m proud as hell the way they fought, they battled. They made a lot of plays. They kept fighting. They never gave up. We were just one guy away in the first half, and that cost us some drives.”

It cost them another loss, though, and although it didn’t cost Helton his job, it couldn’t have helped his long-term employment prospects. Helton clung to the belief that there are better days ahead for USC, a belief reinforced by what he saw in the second half.

“This is a good football team. Notre Dame is a good football team. We are too,” he said. “And I can’t wait to watch the next six games. I told our team in there, if they play like they did in the second half, get ready to win the Pac-12 title and I honestly believe that. We’ve got six games to really put our best foot forward in our conference. We control our own destiny on the way to a Pac-12 title.

“It’s going to be a long ride home and a lot of heartbreak and sadness, and then we’ll come back tomorrow and get it done.”

He went home with his job and his shoe collection intact, but who knows for how long.