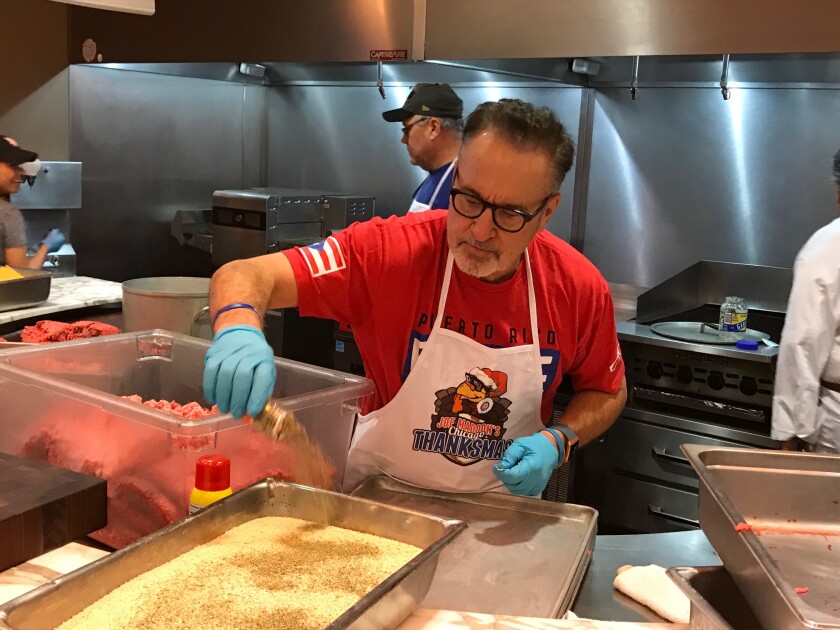 Joe Maddon worked the room with natural ease, shaking a hand here and patting a back there as he moved from table to table. Sometimes the Angels’ new manager stopped and simply listened, a priceless gift to a room full of formerly homeless people who too often are ignored or forgotten.

Residents of the Village of Hope at the Orange County Rescue Mission in Tustin might not be concerned that the Angels’ pitching seems perilously shaky. They might not care who the team’s starting catcher will be. But they knew Maddon cared enough to visit them as they ate dinner at the facility’s Restoration Café on Tuesday and he handed out socks to them and their children, and that made them fans of Maddon the human being.

Angel Valencia, who grew up in Anaheim an Angels fan, wore a Mike Trout jersey and team cap for the occasion. She was grateful that Angels pitcher Ty Buttrey had visited before, but Maddon’s visit touched her deeply.

“For somebody who is a big-time personality from a sports point of view, to come here to us,” she said before pausing to organize her thoughts. “We’re all broken here. To a lot of us we don’t feel important enough to have somebody come to join us.”

Valencia has lived at Village of Hope for 11 months and hopes to advance to the job search program in April.

“So it’s a great honor because it makes you feel like we are special and somebody does care about us, even though we don’t always feel that way,” she said. “I was broken when I got here and who would ever have thought I would see the Angels’ manager here?”

Maddon, through his longstanding Respect 90 foundation, arranged for the residents to eat a meal of pasta, salad and cheesecake catered by Newport Beach restaurant Louie’s by the Bay and receive new socks, backpacks, T shirts and hoodies. It’s part of what he calls “Thanksmas,” a program designed to heighten awareness of the constant nature of homelessness.

He first took note of the problem during his first term with the Angels, as a coach from 1994-2005. He often rode his bike south from Long Beach to Newport Beach and saw “folks who were pushing their entire life in a shopping cart. It really, really bothered me.”

When he became the manager of the Tampa Bay Rays in 2006 he began cooking meals for those in need. He established a community center in his hometown of Hazelton, Pa., and provided supplies to homeless shelters in Chicago while he managed the Cubs from 2015-2019.

His trip to Tustin on Tuesday was his first public charitable appearance since he became the Angels’ manager in October. He has been in town since Jan. 15, spending most of his time in meetings or getting to know players and staffers. On Feb. 8—his 66th birthday—he plans to drive to Tempe, Ariz., with his wife, Jaye, and settle in for spring training.

First, though, he had socks and encouragement to distribute. “It’s one thing to give a couple bucks. It’s another thing to actually show up,” he said, “and I think when people show up, that makes all the difference in the world.”

His visit was a pleasant surprise for Bryan Crain, chief operating officer of the Orange County Rescue Mission. Crain had reached out to Maddon’s foundation but didn’t expect such a quick and enthusiastic response.

“Even the fact he’s here two weeks before spring training, or whenever it starts, says a lot,” Crain said. “New job — I mean he’s coming back, but new city, that’s a lot to bite off. A lot of people would be just heads down, getting ready for the new season. I’m really impressed.”

After residents received their food in a cafeteria-style line and took it to tables that had been neatly set with napkins and plastic utensils, Crain offered blessings for their meals and for the Angels, asking that they play “with dignity and honor, unlike the Astros.” Maddon talked a little baseball, asking how many Angels fans were in the room. After residents cheered, he asked how many Dodgers fans were there. When some dared to cheer, he jokingly booed.

“We’re going to change all you guys,” he said. “My intent for the Angels is we’re going to play extremely well. Everything we do right now is going to be to get us where we want to be at the end of the year.”

As for that pitching staff, he’s concerned. But he said he’s not sure if he has enough because he’s unfamiliar with some of the organization’s young arms.

“My goal is to be into the playoffs this year, not next year. My goal is to go to camp and really outline it in a very lucid manner among the players so that it becomes realistic, and then you go out and do it.”

He also said he’d abide by the results of Major League Baseball’s investigation into the Houston Astros’ sign-stealing but doesn’t favor ordering the Astros to vacate their 2017 World Series championship. Eliminating cheating, he said, should help the Angels.

“Doing this right now permits for, I’m hoping and I believe, a level playing field this year which is going to permit us a chance to be better, more quickly,” he said. “If the playing field is not level, if there’s sign stealing going on and we’re not participating ourselves, that really puts you at a great disadvantage. So I like the idea that the field’s been level and I think that us as an ascending team, it gives us a better chance.”

Even that probably won’t make up for the Angels’ questionable pitching and other flaws, which will be analyzed and dissected soon enough. Tuesday was about hope for the people whose hands Maddon shook and whose meals he provided.

Each kid clutching a new backpack or T-shirt embodied the power of hope, and for playing a role in that Maddon is a winner no matter how many games the Angels win this season.