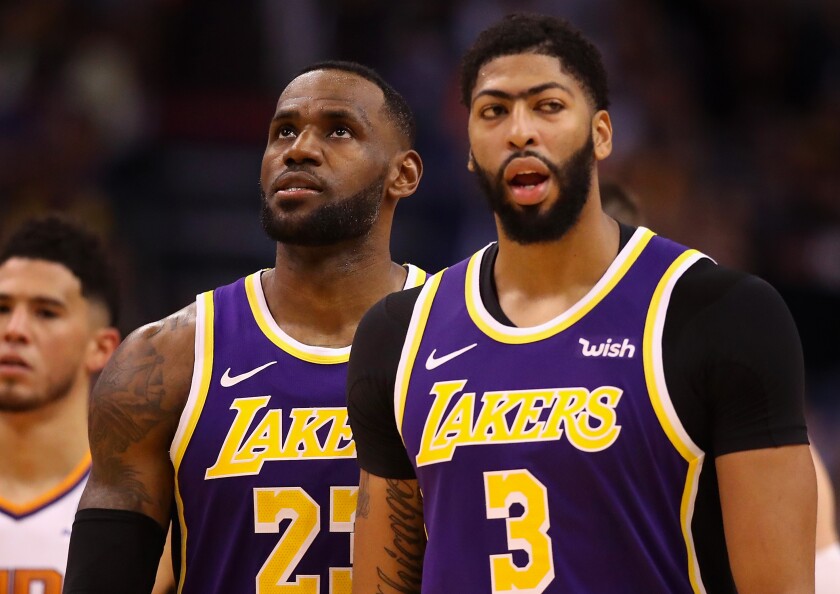 Column: Anthony Davis makes impact on LeBron James even when he doesn’t play

Never was Anthony Davis’ value to the Lakers as clear as it was Wednesday night at Staples Center.

And Davis didn’t play a minute.

In a game he spent confined to the sidelines in street clothes, his influence was visible in LeBron James.

Specifically, in how youthful the nearly 35-year-old James looked in the Lakers’ second game in as many nights.

With Davis sidelined by a troublesome right shoulder, James played as if he were his team’s only superstar in the 120-94 victory over the remains of the Golden State Warriors.

James was dominant from the start of the game to the final minutes of the third quarter, when he departed the landslide win with 23 points, 12 assists and six rebounds in 26 minutes.

Every time James pushed the basketball up the court, every time he attacked the rim, what became obvious was the degree to which Davis has lightened the load he has to shoulder on a nightly basis.

“With A.D. being out, I had to pick up the load a little bit offensively,” James said.

Evidently, James can still be the version of himself who can control an entire game. He has simply chosen not to be that player.

Davis, who leads the Lakers in scoring at 26.3 points per game, has granted James that liberty.

With Davis serving as the team’s primary offensive option, especially early in games, James has been free to let the game come to him. He can still take over games, but such periods of dominance have largely been limited to carefully timed bursts.

The situation Wednesday called for a change in approach.

Davis was held out of the game, which was the team’s second in as many nights. Davis injured his ribs in a victory in Phoenix on Tuesday night. He was also dealing with continued soreness in his right shoulder.

Coach Frank Vogel, who said he expected Davis to be available Friday against the Sacramento Kings, claimed to be unfamiliar with the details of how it was decided Davis wouldn’t play.

“That’s a conversation between himself and the medical team,” Vogel said. “I’m left out of it. They decide whether it’s a situation where it would benefit him to have a night off, to rest that shoulder or to manage that shoulder. This is one of those cases.”

Whatever went into the decision, James accepted the implications.

This time, James didn’t let the game come to him. He forced himself on the game. And there was nothing the worst team in the NBA could do to stop him.

James made five of seven shots and scored 11 points in the opening quarter. He had four assists and two rebounds. He also had a steal.

“Just trying to set the tone early in the game and see if my shot was going in,” James said. “It was and just tried to be aggressive on that side.”

The start was crucial.

The Lakers had played the previous night. Their opponents on this night were the last-place Warriors. With an injured Kevin Durant departing in the offseason, Klay Thompson recovering from a knee operation and Stephen Curry recently breaking his hand, the Warriors resembled a G-League team with a couple of guest players in Draymond Green and D’Angelo Russell.

“Coming off a back to back, it’s very easy to kind of go into the dull stage or feel a little tired,” James said. “So let the group know that I wasn’t [tired] and see if they were going to feed off that, which they did.”

“Everybody else followed the lead and really competed,” Vogel said. “We know Golden State is undermanned, but you still have to go out and play with energy and perform. LeBron set the tone for our whole team with that.”

Asked why he often plays well in the second of back-to-back games, James replied, “Because we don’t have shootaround.”

He sipped his protein shake and smiled.

With the Lakers taking a 98-82 lead into the fourth quarter, James remained on the bench for the final period.

Comparing James on this night to others offered an estimate of how much of himself he has been saving on a nightly basis. His production was in part a byproduct of that conservation.

The overall performance was also a promising sign for the future. So long as Davis returns to continue to lead the offense, this is how James should look in the postseason.