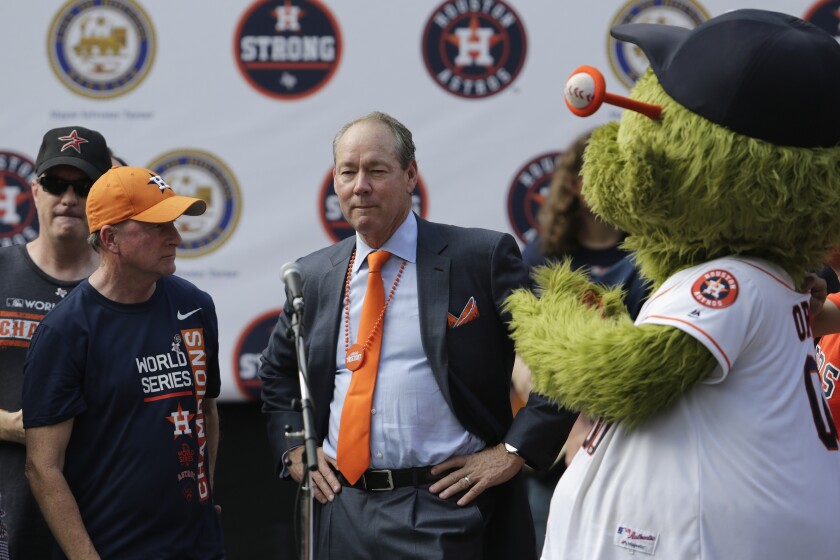 Column: Astros’ appalling lack of remorse for sign-stealing is another affront to the Dodgers

The theft of the 2017 World Series championship continues.

A week after the revelation of their sign-stealing scandal, the pathetic Houston Astros are still cheating the Dodgers.

The arrogant Astros have spent the week behaving like innocent bystanders in an accident whose smoking wreckage somehow landed on their front lawn.

We’re cleaning it up, they told us.

The grass will grow back even stronger, they promised.

Nothing to see here, they claimed.

Not once has any member of the organization accepted blame for causing the mess in the first place. Not one person has uttered a word recognizing the pain their actions brought upon other teams. There has been zero accountability for what has been stolen, and from whom.

How about, “Hey baseball, we’re sorry”?

Or how about, “Hey Dodgers, this is exactly how we cheated you in that World Series, and we regret the indelible damage it caused”?

Instead, did you hear Astros owner Jim Crane in his recent post-scandal news conference?

About the sign stealing, he said, “There’s nothing that’s clear to suggest it affected the outcome.”

About whether this tainted the World Series championship, Crane said, “I think absolutely not. I think we’ve had a very good team for a number of years before [20]17, we were turning the corner. . . . I don’t think it taints it.”

Wrong. It taints it forever.

Asked about the upheaval that led him to fire suspended general manager Jeff Luhnow and manager A.J. Hinch, he said, “I think we’ll have a speed bump here.”

A speed bump. The Astros still view the Dodgers as nothing more than a speed bump. Instead of acknowledging them as victims of a clear crime that resulted in the blatant pilfering of a legacy-changing title, the Astros still see the entire incident as little more than a road hazard on their journey back to domination.

Commissioner Rob Manfred was a tough guy when it came to suspending Luhnow and Hinch while fining the organization $5 million and some draft picks. But he has no backbone when it came to actually punishing one of the owners who employs him.

By not forcing the Astros to vacate the theft of a title, Manfred actually endorsed that championship, essentially agreed with Crane that the sign-stealing had negligible effect on the outcome of games, and set the scary price for future championships.

How many long-suffering baseball teams would be willing to trade their general manager and manager if it meant they could cheat their way to a title they could keep? Hmm. You don’t want to know.

It’s not that the trophy should go to the Dodgers. Absolutely not. The Dodgers can’t possibly want it. The Dodgers didn’t win it. A Los Angeles City Council resolution Tuesday that demanded the championships be stripped from both the Astros and Boston Red Sox and given to the Dodgers was a cheap publicity stunt and a colossal misguided waste of time by a governing body that surely has more important matters on its plate.

The Dodgers surely don’t want what they didn’t earn on the field. But it’s sickening to see the Astros continue to claim something they didn’t earn either. The trophy should be returned and its notations in the record books should be deleted. The 2017 title was won by cheaters, so it should belong to nobody.

“We have to stay together as a team,” he told reporters. “I haven’t changed my opinion about my teammates. They’re the best teammates I’ve ever had. We’re going to stay together, hold our heads and move forward to next season.”

That’s right, Jose, you hold your heads up and hang in there against all those idiots who believe in fair play.

Asked about being called a cheater, Altuve said, “You don’t want anybody to call you like that. But I have two options. One is cry and one is to go out there and play the game to help my team. You know which one I’m going to do.”

There’s also a third option. It’s called an apology. But neither Altuve nor teammate Alex Bregman offered one during interview sessions that surely left other teams steaming.

Bregman, in fact, wouldn’t even acknowledge anything was wrong, saying, “The commissioner made his report, made his decision, the Astros made their decision, and no further comment on it.”

You want a comment on it? In Game 5 of the 2017 World Series at Minute Maid Park, with the Astros’ sign-stealing in full effect, trash can banging repeatedly, Kershaw crumbling twice, Altuve and Bregman were a combined five for 10 with five RBIs and one home run in Houston’s 13-12 victory in 10 innings. There’s your comment.

“The 2020 year, our actions will speak louder than our words,” said Bregman.

Dude, they already have.

This arrogance is what happens when Manfred lacks the spine to take on the players’ union and penalize the players. Every other baseball scandal, from the Black Sox to Pete Rose to steroids, has cost the offending players their careers. This scandal is perhaps worse than any of them because it determined a World Series, yet it has cost the players nothing more than the inconvenience of a few extra questions they aren’t going to answer anyway.

This almighty union that Manfred fears so much? So it only stands up for the cheaters? You have to wonder about the large percentage of its members who play the right way, all those players who were negatively affected by the cheating. Who stands up for them?

To make matters worse, baseball has ordered its players to keep silent on the subject, an edict some of them have thankfully ignored, but a mandate that reveals priorities currently embodied by the cheating Astros.

Nothing to see here. Nothing at all.

“Believe me, at the end of the year everything will be fine,” Altuve said. “We’re going to be in the World Series again. People don’t believe it. We will.”

If that happens, someone else can mine their battered souls, chronicle their uphill fight and celebrate their triumphant battle against an unforgiving world.

Me, I’ll be interviewing the trash can.