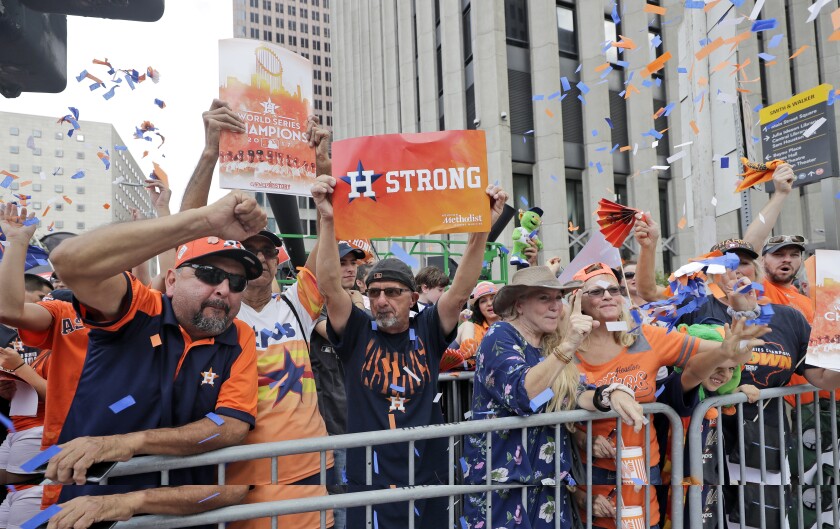 There are always going to be some sports fans who want history to be viewed differently. The latest example involves the Houston Astros and the sign-stealing scandal that has rocked baseball this offseason.

Even recently named New York Mets manager Carlos Beltrán, who played for the 2017 Astros, was ousted.

The Los Angeles City Council voted unanimously to ask Commissioner Rob Manfred to award the Dodgers the 2017 and 2018 World Series titles while there are several online petitions asking the commissioner to at least vacate the 2017 World Series championship.

While the commissioner has no interest in “trying to change what happened,” Houston’s World Series title is forever tainted as is anyone who was on that team. “Houston Asterisks” shirts and hats are already popping up everywhere with about two months to go before opening day.

The sign-stealing scheme was common knowledge to most anyone wearing an Astros championship ring today. They weren’t surprised by MLB’s findings, just that they got caught. The group still wrestling with the reality that their championship is forever tainted are Astros fans, who did nothing wrong but support a team they thought embodied the heart, fight and resiliency of their community.

The Houston Chronicle wrote that the scandal “now has fans feeling ‘disappointed,’ ‘embarrassed’ and ‘duped.’ ” Astros fan Michael Hargrove added, “I think the whole cheating scandal brings more shame than honor to Houston. The true fans here in Houston are proud of our teams win or lose, but to cheat is outright disgraceful.”

Sports reporter and Astros fan Jill Jelnick wrote an op-ed for the San Antonio Express about dropping her favorite team. “I’m breaking up with the Houston Astros,” she wrote. “The Astros cheated on us.”

Houston’s connection with the Astros team that won the 2017 World Series is different from the relationship most cities have with their championship clubs. Sure, it was the first World Series title in franchise history, but it meant so much more than that.

The Astros won the World Series nine weeks after Hurricane Harvey, the storm that led to more than 100 deaths and displaced more than 30,000 people.

Many in Houston watched the Astros clinch the World Series at Dodger Stadium on televisions in ravaged living rooms. As they tried to piece together their lives, the Astros offered a much-needed respite. They were a ray of light for a city looking for some hope.

Nothing that happens now can take away how that team made that city feel at that time. No sanction or punishment can erase the joy the Astros provided Houston in the wake of Hurricane Harvey when fans danced and celebrated in streets still lined with storm debris.

This isn’t to excuse what the Astros did, of course, but simply highlight that it’s impossible to change the past and our feelings, for better and for worse.

It reminded me of Lance Armstrong being stripped of his seven Tour de France titles (1999-2005) after admitting to doping. I had Armstrong’s picture taped on the wall of my hospital room when I went through cancer treatment in 2001 and 2005. Both times I was diagnosed came in the summer and the Tour de France was always on television. A framed yellow jersey autographed by Armstrong still hangs in my home.

It’s not for Armstrong but for what he represented to me during that time in my life. Each time he raised his hands while wearing that jersey through the cobblestone streets of Champs-Elysees, it symbolized the fairy-tale ending all of us in the hospital going through cancer treatment were hoping to achieve.

While I no longer view Armstrong as a champion, I refuse to forget what he symbolized for me during a time when I needed some hope, whether it was real or manufactured in hindsight.

As tainted as the Astros’ World Series title is now, that’s no fault of Astros fans and the city of Houston. No asterisk or punishment can ever change what that team did for that city during its darkest hour.