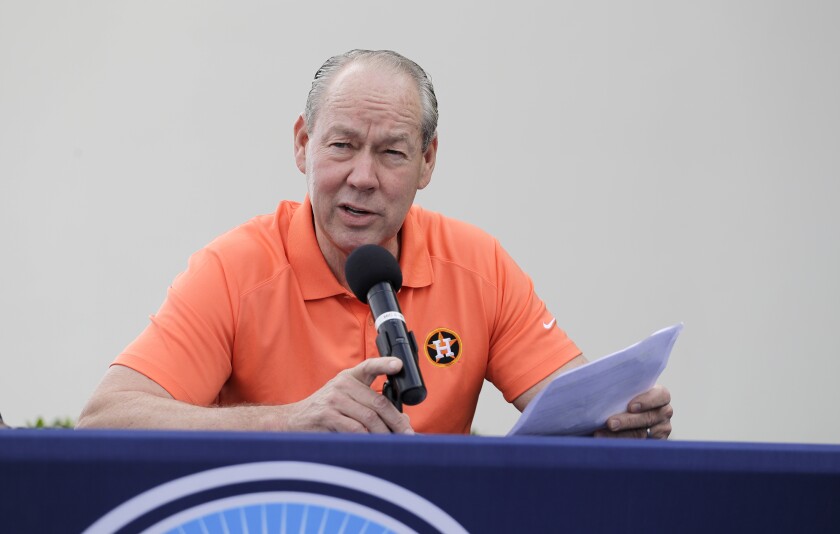 His billions couldn’t protect him, not as he was seated in behind a microphone at the Houston Astros’ spring training complex in front of reporters demanding answers.

“Our opinion is that this didn’t impact the game,” Crane said of the sign-stealing scheme that helped his team take down the Dodgers in the 2017 World Series.

Less than a minute later, Crane was asked what he meant by that.

“I didn’t say it didn’t impact the game,” he said.

Like Sterling and McCourt before him, Crane came across as an out-of-touch plutocrat used to people telling him they agree with whatever nonsense comes out of his mouth.

Speaking to an audience that wasn’t financially beholden to him, Crane looked small and sounded lost.

Many details of the Astros’ electronically-powered cheating system remain a mystery, as the baseball industry views the commissioner’s report on the subject as incomplete, if not fictitious. While the mea culpa news conference Thursday didn’t reveal the extent of the Astros’ fraud, it completely exposed Crane.

Crane’s demeanor was that of a person used to getting what he wants and what the owner wanted in this case was to not take any responsibility for his team’s cheating and to protect its only championship.

“Clearly, the report states I didn’t know about it,” he said. “No, I don’t think I should be held accountable.”

He made the laughable argument that he went “above and beyond” by firing general manager Jeff Luhnow and manager A.J. Hinch after they were suspended for a year by the league.

“I also agree that our players should not be punished for these actions,” Crane said. “These are a great group of guys who did not receive proper guidance from their leaders.”

But the reason the players were unpunished had nothing to do with a lack of culpability. They were granted immunity in exchange for talking to investigators. If they were suspended, there would have been pushback from the union.

Reminded there were logistical considerations for that, Crane replied, “I think I’ve done just about everything I can.”

He mentioned Luhnow and Hinch again.

“The commissioner has dealt with the players and I stand by his decision,” Crane said. “I’m not trying to hide behind the decision.”

Crane’s clumsy double talk reached a point where it became unclear why the Astros were holding a news conference.

Crane said he was sorry, only he didn’t sound sorry.

Asked if his team cheated, Crane replied, “We broke the rules. You can phrase that any way you want.”

Doesn’t the fact the Astros used the system as much as they did indicate they believed it worked?

“I stated where the commissioner stands on this,” he said. “I stated where I stand on this. To determine the effect and the cause is, in my opinion, almost impossible.”

So why was he apologizing?

“We’re apologizing because we broke the rules,” he said.

In the immediate aftermath of the news conference, the Astros opened their clubhouse to the media and made their players answer for what they did.

Crane almost certainly retreated to the bubble of ignorance in which he resides, his lackeys convincing him the news conference wasn’t a train wreck or the media was to blame for the negative reaction to what he said. This is both the gift and the curse of wealth.