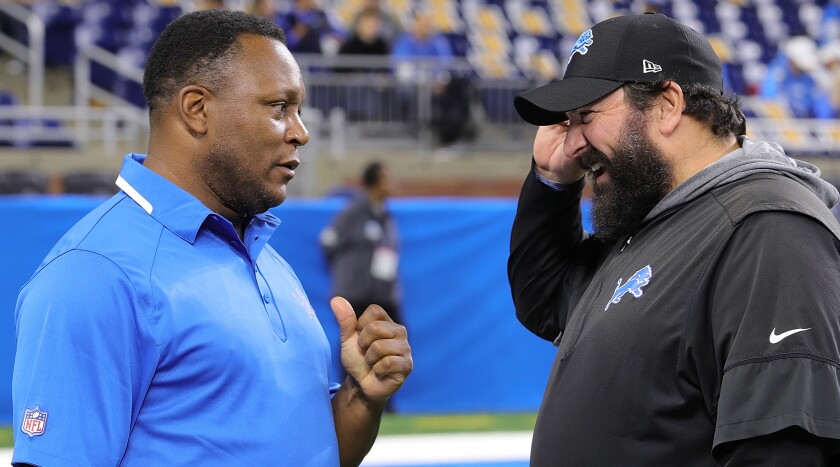 Column: Barry Sanders shocked the NFL by retiring 22 years ago. He still has no regrets

As Barry Sanders sits on a couch in the lobby of a hotel overlooking Marina del Rey, he doesn’t have any regrets about his Hall of Fame career.

This July, he will turn 52 and it will be 22 years since he shockingly retired from the NFL in his prime, just short of passing Walter Payton for the NFL’s all-time rushing record.

“It doesn’t seem like it’s been that long,” Sanders said. “It was tough to make that decision after playing for 10 years. It was a challenge, but it was something that I understood and wanted to do at that point in my life.

“I was 30, but I felt old after 10 seasons. It was something that I was comfortable with because I had such a phenomenal career and I was OK walking away from it.”

While Sanders still believes he made the right decision, it was a move made in part because he didn’t see a path toward the Super Bowl with the Detroit Lions, a star-crossed franchise he helped lead to one playoff win, in 1991. It’s still their only postseason victory since 1957.

“I was able to leave on my own terms, so that’s empowering in a lot of ways,” Sanders said. “I lived out what was beyond a childhood dream. It was enough for me and it was time to move on. That incentive and drive to play wasn’t there.

“When you’re in your early 20s, playing in the NFL is the greatest thing in the world, but at 30, I realized I had done it and it was time to move on. I wasn’t coming off a Super Bowl championship, and it didn’t look like we were going anytime soon, so I didn’t have those things to consider like some other players might have.”

Sanders never got to play in the Super Bowl, but he will be at this year’s game representing a Detroit-based company, which recently got Sanders to put his Lions No. 20 jersey back on for a commercial.

Last year, Sanders took his sons to the Super Bowl in Atlanta to watch the Rams play the New England Patriots.

He still shakes his head at the Rams’ inability to utilize Todd Gurley, who only carried the ball 10 times for 35 yards in the Super Bowl. The Rams ran the ball 18 times for 62 yards in a game that was tied 3-3 with less than eight minutes left in the fourth quarter. The Patriots ended up winning 13-3.

“Todd is a fantastic runner,” Sanders said. “They should have run it 50 times in the Super Bowl last year. I couldn’t understand what was going on. Maybe he was injured, but I didn’t understand that. He still had over 850 yards this season and he’s still young.

“He has a lot of good football ahead of him. He still has a promising career. He just needs more carries. That’s all.”

Quarterback Tom Brady, who turns 43 in August, will be a free agent this offseason and has been a rumored target of the Chargers if he leaves the Patriots. While Sanders could see that happening, he hopes Brady stays in New England and retires as a Patriot.

“I think they should get in the room and figure something out with Tom,” Sanders said. “Going to another team should be the last resort, but I’ve watched this game all my life, and I’ve seen it happen before to so many great players.

“It would be strange to see him in another uniform. Tom isn’t in his prime, but he isn’t a liability. I think he’s a big asset, so I hope he’s in New England next season.”

During his career, Sanders was often compared to Dallas Cowboys running back Emmitt Smith, who would become the NFL’s all-time leading rusher. The two have become good friends in retirement and recently talked before Smith’s son, E.J., committed to play football at Stanford.

Sanders’ son committed to Stanford in 2012 and played three seasons for the Cardinal before transferring to Oklahoma State, his father’s alma mater.

“Emmitt reached out and our two sons talked before he went to Stanford,” Sanders said. “It’s exciting for them that he has a chance to go to a great school like that. That’s all you want from your sons, to grow up and establish themselves in their own career. I’m proud of them.”