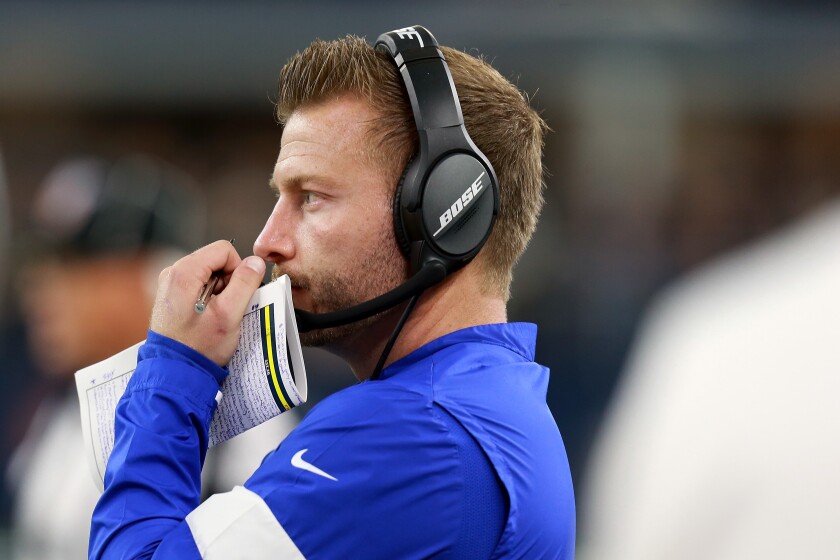 The visionary who promised a Rams victory over New England in the Super Bowl is back.

The prophet who guaranteed a Dodgers playoff victory over the Washington Nationals is going to try it again.

If you guessed I would bravely use this space to offer more bold prognostications for Los Angeles sports in 2020, your prediction was sadly correct.

▶ A bunch of NFL teams fire their head coaches, and when looking for replacements, general managers have one requirement: You cannot have any connection to Sean McVay.

▶ Todd Gurley plays in the Pro Bowl in Orlando, Fla., carries the ball 25 times, gains 136 yards. Somewhere in the South Pacific, a vacationing McVay is standing on a beach screaming, “I’m an idiot!”

▶ Philip Rivers cuts ties with the Chargers because he no longer can hack the drive from San Diego. The team holds his farewell banquet at an Orange County hotel and the event sells out, the place filled with Packers and Vikings and Steelers and Raiders and Broncos and Colts and Texans fans.

▶ A groundhog climbs out of his hibernation hole, says, “They really didn’t fire Clay Helton?”

▶ The Dodgers arrive at spring training with basically the same team as the last seven years, just good enough to be able to brag about winning seven consecutive National League West titles. A bunch of old guys with Southern accents mistakenly show up at the same time, thinking it’s an Atlanta Braves fantasy camp.

▶ The Angels arrive at spring training and promptly announce that new acquisition Anthony Rendon won’t be traveling to Camelback Ranch. He’s worried that those Hollywood-lifestyle Dodgers will be drinking tumbleweed martinis and smoking cactus.

▶ The UCLA basketball team makes the NCAA tournament under coach Mick Cronin but, citing the need for somebody to actually pay attention, UCLA sends the women’s gymnastics team in their place.

▶ Kawhi Leonard and LeBron James agree to settle their dispute over the load-management philosophy by playing a nationally televised game of one on one. On the day of the duel, the Clippers announce that Leonard won’t be showing up, citing load management.

▶ The Los Angeles Wildcats overcome two incredible obstacles, winning the championship game in the rebooted XFL while burdened by the most uninspired L.A. team nickname ever.

▶ The Lakers and Clippers end the regular season with the two best records in the Western Conference. In preparation for their potential series, Doc Rivers orders giant Clippers posters to cover up the entire Staples Center hallway. They are quickly removed when it becomes apparent the teams can’t get out of their locker rooms.

▶ At the start of the WNBA season, Sparks coach Derek Fisher and star Candace Parker peacefully co-exist for 0.4 seconds.

▶ The Dodgers decide to prioritize their fans over their pocketbooks by cutting a TV deal that allows all of Los Angeles easy access to their games and … aw, who are we kidding. This is the most implausible prediction in this column. Sorry.

▶ The Lakers overcome a three-games-to-none deficit to defeat the Clippers in the NBA Western Conference finals. The comeback coincidentally began on the night when No. 1 Clippers fan Shelly Sterling decided to occupy her courtside seats despite Rivers’ fervent plea that she exercise load management.

▶ The Lakers win the franchise’s 17th NBA title in a magical run that takes an unusual turn when, in bowing to James’ demands, they hold their championship parade in China.

▶ At the annual NHL awards night, the Kings receive the David Copperfield Trophy for pulling off the unimaginable feat of winning two Stanley Cup championships in three years and then completely disappearing.

▶ In a more believable Dodgers TV prediction, the team attempts to placate their SportsNet LA-starved fans by allowing local networks to broadcast a volunteer artist recreating their games on Etch A Sketch.

▶ At the All-Star game at Dodger Stadium, the Dodgers announce that a statue of Clayton Kershaw is being erected. It will be available for daily public viewing 11 months a year, and closed for repairs in October.

▶ The Angels’ Rendon turns down a chance to play in the All-Star game because, well, you know.

▶ The Tokyo Olympics are held with dozens of Southern California athletes, all of whom complain about the sushi.

▶ Chip Kelly begins his third football training camp at UCLA. By the end of the first week, the Bruins are 0-4.

▶ Helton begins football training camp at USC with a recruiting class ranked so low, it includes me.

▶ SoFi Stadium opens with the Cowboys defeating the Rams on a strange Sunday night. After three carries, Gurley is moved to defensive back. “Yep,” McVay says. “I’m still an idiot.’’

▶ The Chargers’ first game in SoFi Stadium is cut short when the plumbing stops working. They immediately call the landlord’s emergency hotline number, but the Rams can only promise to get somebody out there sometime in the next week.

▶ The Dodgers bring Rich Hill out of medical retirement for one first-round playoff game so Dave Roberts can pull him.

▶ The Angels win a playoff series while a nation exclaims, “So that’s what Mike Trout looks like.”

▶ The Dodgers lose to the New York Yankees and ace Gerrit Cole in Game 7 of the World Series. Ownership wonders how much it would cost to throw a parade for eight consecutive division championships.

▶ As the Lakers begin defense of their title, the debate rages about the winner of a game pitting Anthony Davis and James versus Shaquille O’Neal and Kobe Bryant in their prime. Are you kidding me? Throw out the styles and numbers. Kobe is not losing. Period. That’s not a prediction, that’s a fact.

▶ USC loses badly to Notre Dame, after which Bohn rushes down from the suites and promotes Helton to the unique dual position of coach and university president.

▶ Before hosting USC in an empty Rose Bowl with a losing team, UCLA’s Kelly shows up on an injury report — he’s questionable, suffering from long-term amnesia.

▶ LAFC has the best record in the MLS again, but again fails to win the MLS Cup, losing by one goal in an early-round home game in front of the league’s smartest fans when goalkeeper Tyler Miller is temporarily blinded by a smoke bomb.

▶ I write another column like this one predicting the 2021 sports year. Helton climbs out of his hibernation hole and says, “Fire Bill Plaschke.”