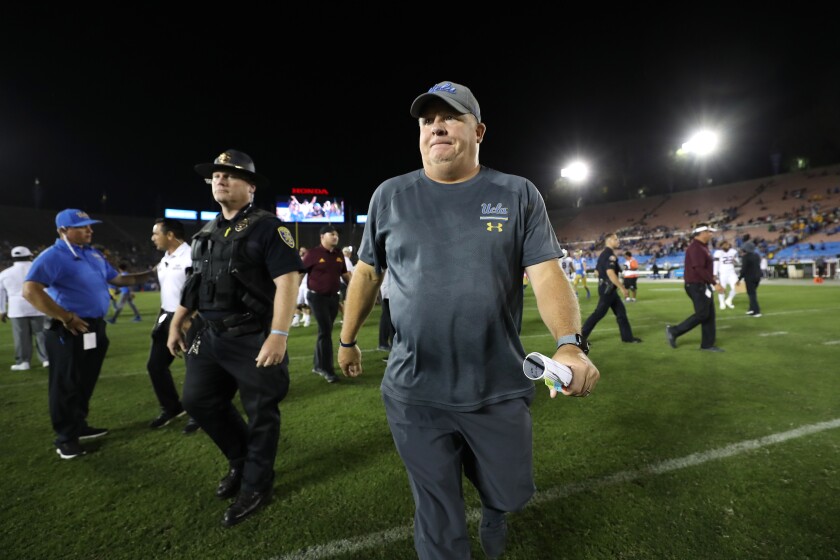 Column: Bruins are finally showing some life and have real chances

As usual, the stands were half empty.

But suddenly, the standings are half full.

Did you know UCLA still has a shot at winning the Pac-12 Conference championship?

Can you believe Chip Kelly might actually know what he’s doing?

Those are not trick questions. This is not another Bruins joke. On a humid Saturday night in Pasadena, two seasons of grimaces began slowly melting beneath a hot little flicker of hope.

It danced from Joshua Kelley’s legs, flew off Dorian Thompson-Robinson’s arm, tucked itself in Kyle Philips’ hands, and wrapped itself around a defense that suddenly has learned how to tackle.

It was real hope, showing up at the Rose Bowl for the first time in Kelly’s two-year regime, clinging from a 42-32 steamrolling victory over a decent Arizona State team on an evening that refocused a season.

Suddenly, the Bruins (3-5) have won consecutive conference tussles against Stanford and Arizona State by a combined score of 76-48.

Abruptly, this team has a 3-2 conference record and trail the leaders in the Pac-12 South by only one game with both leaders remaining on their schedule.

Almost overnight, UCLA controls its destiny with remaining games at Utah and USC sandwiched around home games against Colorado and California.

“The Baby Bruins are growing up, and it’s fun to see,” Kelly said with a smile.

It’s fun, and weird, and unexpected. Few would bet on them. Few have been willing to even watch them in person, as they drew another abysmal Rose Bowl crowd Saturday night while becoming the final Power 5 conference team to finally win a home game this season.

The UCLA players don’t have many believers. The UCLA coach has been roundly criticized, particularly in this space, as a $23.3-million bust. The UCLA bandwagon that was so revved up when Kelly was hired has been so abandoned since then, it has been placed on blocks.

Well, take that sucker down, clean it up and pull it out of the garage.

The game ended with the UCLA band appropriately playing the theme from the TV show “Ballers.” The Bruins left the field to a standing ovation from the fans that remained. Dozens of folks hung over the tunnel and stretched out their hands in hopes of slapping congratulations to the newly bouncing winners.

“We still have a lot of things we have to work on, things we’ve got to do, it’s still a really, really young football team,” Kelly said. “But they’ve gotten better week by week and will continue to grow as a team.”

Bottom line, if Thompson-Robinson isn’t seriously injured after a fourth-quarter hit that led him to limp to the locker room after the game, the Bruins have a chance.

Whatever it is, they have a chance to change their 2019 narrative, and that is far more than anyone believed several weeks ago when they were getting clocked by Oregon State.

They have a chance because the offense was finally clicking enough to roll over the country’s 18th-ranked scoring defense, a Sun Devils team that was giving up only 18 points per game.

The Bruins scored more than that in the first half. They scored all 42 points in three quarters.

They rushed for more than 200 yards (217) for a fourth consecutive game for the first time in five years.

They have a chance because the defense is no longer a sieve, holding the Sun Devils to one touchdown in the first three quarters, on a four-yard drive after a lost fumble.

“We put our defense in some difficult situations today, but I thought they responded to those,” Kelly said. “What we talk about, when you face challenges and adversity, how do you approach that? Is it, ‘Oh God, here we go again,’ or is it, ‘All right, let’s go?’”

They have a chance because Kelley is finally healthy after being hampered at the start of the season because of a knee injury. He was tough and tricky Saturday, bouncing around for 164 yards and four touchdowns and remember, this is the guy who ran over USC last year.

“I like playing at the Rose Bowl,” Kelley said in an understatement. “We needed a win here for sure … that was definitely extra incentive for us.”

They also have a chance because Thompson-Robinson is finally maturing into the position, allowing his great gifts to take over, continually creating success in the face of failure.

He ended the first half against great pressure with a perfect soaring pass into the arms of Philips at the pylon for a touchdown that gave the Bruins a 28-7 halftime lead.

He ended the third quarter by sprinting away from another furious pass rush before turning and finding Devin Asiasi for an eight-yard score to make it 42-10.

He finished with those two touchdown passes, no interceptions, 16 completions in 23 attempts, and a familiar cheer ringing his ears as he limped off the field after the victory.

Finally, they have a chance because this hellacious season has actually turned a little heartwarming.

In a moving few moments Saturday, Ethan Fernea, a senior former walk-on receiver, made his first three catches of the season, two of which led to touchdowns,all of which had higher meaning.

Fernea is the first player to wear No. 36 since it belonged to Nick Pasquale, the inspirational walk-on receiver who was killed in 2013 when he was struck by a car in San Clemente. Fernea was awarded the number after a practice this summer, and has lived up to its highest of standards.

“Pretty surreal feeling,” Fernea said. “I’ve been dreaming about making catches in the Rose Bowl for some time now.”

The Bruins have dreamed about just being relevant in the Pac-12 standings. Now that it’s a possibility, I had to ask Kelly, have you told your team that it controls its destiny?

How about those Bruins? Three victories, eight games, and a world of hope.