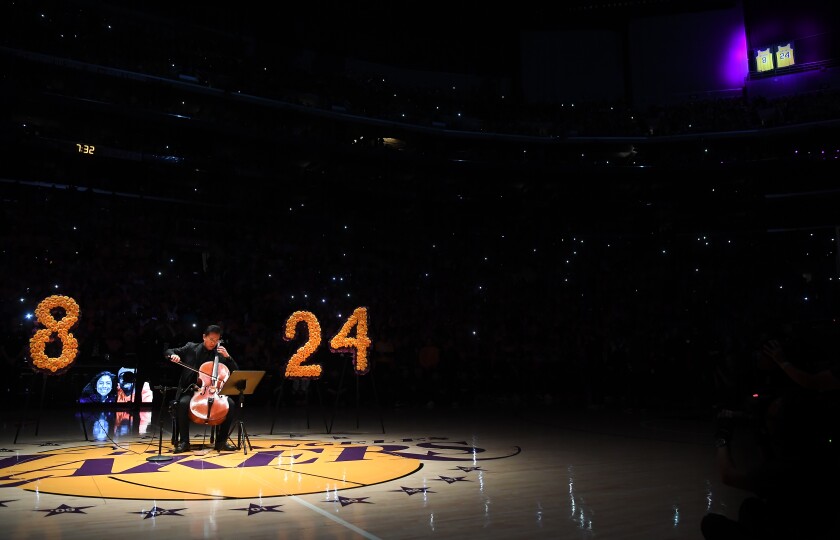 He touched the hearts of Lakers Nation despite never having played an organized game of basketball.

He starred at the most impactful Lakers game in history even though it was the first Lakers game he had ever attended.

He was asked to provide the soundtrack to a city’s grief while mourning his own family tragedy.

When he was summoned to Staples Center to play “Hallelujah” on the cello for pregame memorial ceremonies Jan. 31, Ben Hong of the Los Angeles Philharmonic faced obstacles in fortissimo.

He was given one day to prepare. He had never seen the sheet music. He had yet to see the accompanying video. He never played at the arena. All of which paled to his grieving the December death of his ex-wife, the mother of his son.

Yet somehow, on the wings of the magical memory of Kobe Bryant, he soared.

By soulfully playing the iconic ballad underneath the giant scoreboard showing video highlights of Bryant‘s his career, Hong hit just the right notes in processing the pain for the 19,000 fans in the arena and millions worldwide.

When Bryant dunked, Hong’s notes were brilliant and vibrant. When Bryant spoke, they were weighty and thick. In the end, when the screen went black, Hong finished with the sonorous farewell of a long high C.

“The collective emotion was intense. You could feel the grief, the sadness. It was overwhelming. I could hear it,” he said. “But I wasn’t nervous because I was joining them. … I was honored to give an emotional voice to a city’s pain.”

That voice has since become the cornerstone of the Bryant tributes in the wake of his death in the Jan. 26 helicopter crash that also claimed the lives of his 13-year-old daughter, Gianna, and seven others.

Several Lakers players and officials have cited the performance, which occurred before a loss to the Portland Trail Blazers, as their most emotional moment since Bryant’s death. Basketball fans from around the globe have tracked down Hong at his day job as Associate Principal Cello at the LA Philharmonic and thanked him.

”This is a guy who has never been part of a basketball game, never seen the Lakers in person, yet in a span of 24 hours he becomes one of the most important people in our franchise history,” said Tim Harris, the Lakers’ president of business operations and chief operating officer. “As far as Laker fans are concerned, he’s not just a cello player, he’s the cello player.”

When the six-minute song and video were complete, Hong retreated to the opening of the Staples Center tunnel with 17-year-old son Julian. As LeBron James ended the ceremonies with a compelling speech, Hong was overcome with memories of Laura Liepins and their 15-year marriage and how their small family reunited in the final months of her battle with breast cancer.

As fans around him wept, so finally did Hong, the artist and the city united in a shared sense of loss, a basketball legend bonding a community one more time.

“I told my son I had also been playing for his mother,” he said. “It opened up all those scabs of sadness.”

It only figures that on a night when the impact of Kobe Bryant was being remembered, that impact continued to grow.

”There’s something deeper there, this city collectively healing from the music while the musician was having his own private healing moment,” Harris said. “That’s Kobe. That’s all Kobe. There he is again.”

At the end of the longest week of their professional lives, while planning for an event they could never imagined in their worst dreams, Lakers staffers had to desperately fill one last requirement.

They needed one more instrument, and somebody who would play it, and they weren’t sure about either.

The schedule for the Kobe Bryant tribute in the first home game since his death contained Usher singing “Amazing Grace,” Charlie Puth and Wiz Khalifa performing, “See You Again,” James giving a speech, a searing video filled with Bryant highlights and an interview, plus a song to accompany the video.

That song was going to be “Hallelujah,” chosen in the hours after Bryant’s death without a second thought by Matt Shelton, the Lakers’ director of game entertainment.

“It seemed like the right fit for the moment” Shelton said. “I didn’t consider anything else.”

But one day before the game, they hadn’t decided on an accompanying instrument and musician, and time was running out.

“Guitar wouldn’t work, horn was too harsh, violin felt tinny, we needed something low key and deep,” recalled Harris. “We were going around and around and I finally just asked, ‘Does anybody know anybody who plays the cello?’ ”

Harris does not listen to classical music. He does not attend the symphony. He has never touched a cello. Like seemingly everybody who has been honoring Bryant in the last two weeks, he was just going by feel.

And, in answer to his original question, no, nobody had any idea who played the cello. Somebody contacted Michael Roth, vice president of communications for AEG, and through a connection Roth arranged for the LA Philharmonic to deliver one.

It was Hong, 51, a renowned musician who, like Kobe Bryant, joined a local institution at a young age and stuck around, this being his 27th year with the LA Phil.

When approached by symphony management with the request, Hong immediately agreed even though he was living his own personal nightmare.

“It was appropriate that it was me,” he said. “I would be playing for people in pain, and I understood that pain.”

On Dec. 10, ex-wife Laura, a director at the Colburn School of Music, died at 50 after a battle with breast cancer. Her fight brought her family back together for her final months, and both Ben and Julian were at her side when she passed.

“We did a lot of living in a short amount of time,” Hong said.

At her funeral, accompanied by Hye-Jin Kim on the piano, Hong played a passage from the “Quartet For The End of Time” by Olivier Messiaen. It was the first time he had played under such terrible conditions, and he came to a realization.

“It wasn’t about the notes, it wasn’t about the performance. It was way to remember, to mourn, to cope with what we were experiencing,” he said. “The music was a beautiful way to process very difficult, very painful, very sad feelings.”

Less than two months later, he thus felt prepared to honor Kobe Bryant. He just had to learn the music, arrange the music, and make it fit the video in less than 24 hours.

“I had never played it before, but it wasn’t terribly complex,” he said.

He and local musician Alan Steinberger began working on an arrangement around 9 p.m. on Thursday. On Friday, he learned that the video had been extended by a minute. So, after a morning concert, he hurriedly adjusted the composition.

When he stepped onto the Staples Court for the first time in his life, he was overcome with awe.

“I felt entrusted with this higher purpose. I felt very honored,” he said. “I was playing for the memory of the nine victims, playing the grief of the crowd, playing for everyone.”

By the time he finished, the roar from the darkened seats illuminated just how deeply he had reached everyone.

In impacting so many lives, Hong’s life has been equally impacted, from the moment he returned to his Staples Center dressing room to find his phone bursting with text messages.

He has been celebrated by fellow musicians, congratulated by symphony audience members, and thanked by Lakers fans.

“I’ll get people coming up to me and saying, ‘Hey, you’re the violinist, right? You’re great,’” he recalled with a laugh.

Through it all, he can’t get Kobe Bryant’s words out of his head, the ones from the video, talking about toughness and resiliency and following your dreams.

”I was just a music version mirroring what Kobe said,” he said. “It was all about a sense of eternity, unity and peace.”

And every breath we drew was Hallelujah.