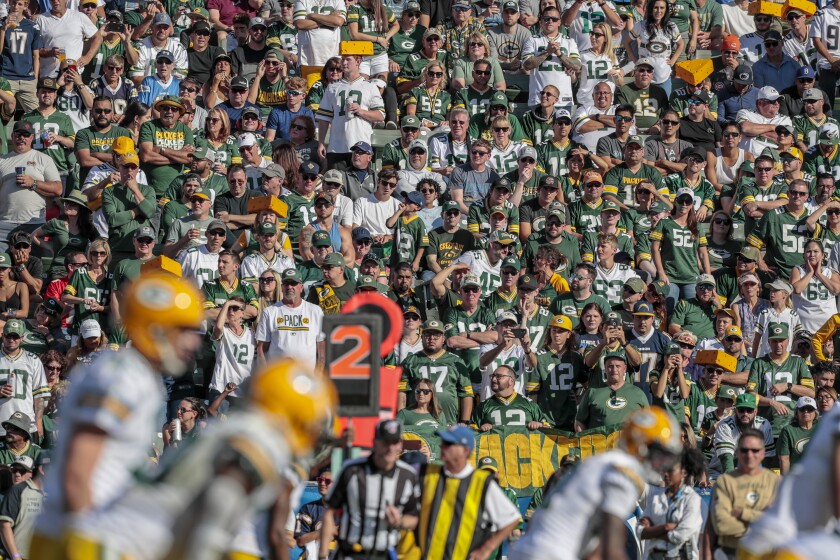 Column: Chargers’ big win shows why they deserve to play where they’ll be appreciated

The punchline punched back.

The interlopers owned the joint.

On a bodacious yet bittersweet Sunday, the Chargers showed they belong somewhere, anywhere.

But just not here.

In a dominant 26-11 victory over the mighty Green Bay Packers at Dignity Health Sports Park, the Chargers proved they are not some running joke, but an actual contending-caliber football team that deserves to play in a place that appreciates them.

But that place is not Los Angeles.

It was a nationally televised wonder for the Chargers and a shame for the NFL, the football world witnessing Sunday’s most brilliant home-field performance coming from a team without a home.

Yet a crowd that was almost completely Cheesehead rocked the stadium with chants of, “Go Pack Go!”

A Chargers defense led by the fast and furious Melvin Ingram and Joey Bosa held the great Aaron Rodgers to 61 yards passing through three quarters.

Yet the Green Bay faithful were so overwhelming, at one point Packer linebacker Za’Darius Smith lifted his hands to exhort the crowd to cheer, and when is the last time you’ve seen a visiting player do that anywhere but here?

When the Chargers scored their first touchdown late in the third quarter, they actually silenced most of the crowd, and when is the last time you’ve seen a home team do that anywhere but here?

They’ve endured three seasons of this nonsense, their failure to capture a Los Angeles audience resulting in nearly every home game feeling like a road game, their stadium overrun with folks from Green Bay and Pittsburgh and Philadelphia and Denver and, of course, Oakland.

“Felt like an away game, every week, it is what it is at this point,” said Charger receiver Keenan Allen after departing the sea of green and gold. ”Yeah, just to shut those guys up, we come together as a team, 16 road games, that’s what we do … we know what it is.”

It’s a terrible look for the league, and embarrassing look for the city, and a completely unfair situation for the players, especially on special afternoons like Sunday, when they deserved three hours of standing ovations. Instead, they had to settle for one prolonged, “Let’s Go Chargers’’’ cheer that arose in the final minutes from a relatively small group collected in the corner of an end zone.

Bless those fans. They are the definition of diehards. The problem is, there are just not enough of them, and it affects the way this organization is perceived, both inside and out.

In this season’s earlier home loss to the Steelers, the players let the home hostility bother them. At least one Charger said they succeeded Sunday partly because they overcame that annoyance.

“We’ve talked to ourselves about bringing the energy ourselves, not allowing the crowd to affect us, and not needing the crowd to get going,” said Drue Tranquill, the rookie linebacker who didn’t have to deal with this sort of thing at Notre Dame. “I thought we did a way better job this afternoon than we did in the Pittsburgh game of really motivating ourselves … we talked about, we have all we need.”

It was Tranquill’s punt block that led to Melvin Gordon’s one-yard touchdown run to give the Chargers a 19-0 lead late in the third quarter. On both the block and the run, Tranquill and Gordon celebrated with teammates amid an eerie calm. It was so odd, seeing Rivers dancing by himself to a soundtrack of mostly murmurs.

“Us against the world? Pretty much, yeah,” said Gordon.

On the other side, Rodgers said the visiting crowd was so loud, it might have actually made the Packers complacent.

“The focus was off,’’ Rodgers said, later adding, “I don’t know if it was the fact that we had an incredible Green Bay crowd today or the fact looking too much at what their record was (3-5), but it wasn’t a great performance.”

There are only two regular-season games left at cozy Dignity Health Sports Park, where the small size amplifies the impact of the visiting fans. The Chargers hope the atmosphere will change when they move into giant new SoFi Stadium next year, a place with more space and cheaper tickets.

Ah, but even the grandest football palace will not attract more Charger fans as long as it contains, well, the Chargers. Moving 13 miles north is not going to change the fact that most Southern Californians thought the Chargers never should have moved from San Diego in the first place.

Unlike the Rams, whose arrival here was sold as a homecoming, the Chargers showed up as home wreckers, and despite their best efforts, they’ve been unable to change that narrative. They’ve lost most of their San Diego fans, they grossly overestimated their number of Los Angeles fans, and now they are truly a team without a cheering section.

Some folks initially said, if they win, it will work. Well, it hasn’t.

Last season they won a playoff game and were just 60 minutes from reaching the AFC championship game when they were knocked out by the eventual champion New England Patriots. Yet the buzz didn’t make it to Monday morning.

Other folks said, if they offer a great fan experience, it will work. Well, they have, and it hasn’t.

For sheer proximity to the action, there is no better place to witness a professional football game in this country than Dignity Health Sports Park. You are so close to the field, it’s like watching a Broadway play while standing in the wings. For three years, visitors have marveled at the intimacy, the accessibility and the cleanliness of the place. Yet, as Sunday once again proved, few Chargers fans show up.

There is a belief in some parts that when hosting rabid fan bases such as the Packers’, Charger fans can’t resist selling their seats at high prices. Whatever the reason, the stadium consistently looks as if it doesn’t belong in Los Angeles, and neither does the team.

“The whole stadium is green; they feel like they can come in here and take it over,’’ Allen said. “I promise you, it’s not that sweet.”

It was decidedly sour for the Packers against an inspired Chargers team — “For whatever reason, we do better when the Chargers don’t have a chance,” said Rivers — but the bitter taste remains with a league that needs to do something about these bolt-bearing nomads.

Here’s guessing NFL owners will give the Chargers a couple of years in SoFi Stadium to find their fans. If they don’t, and at this point there’s no reason to believe they will, here’s guessing the league will push the Spanos family to either move the team or sell it. They could ship it to London. They could drive it to the Bay Area. They could sell it to someone in — woo-hoo! — San Diego.