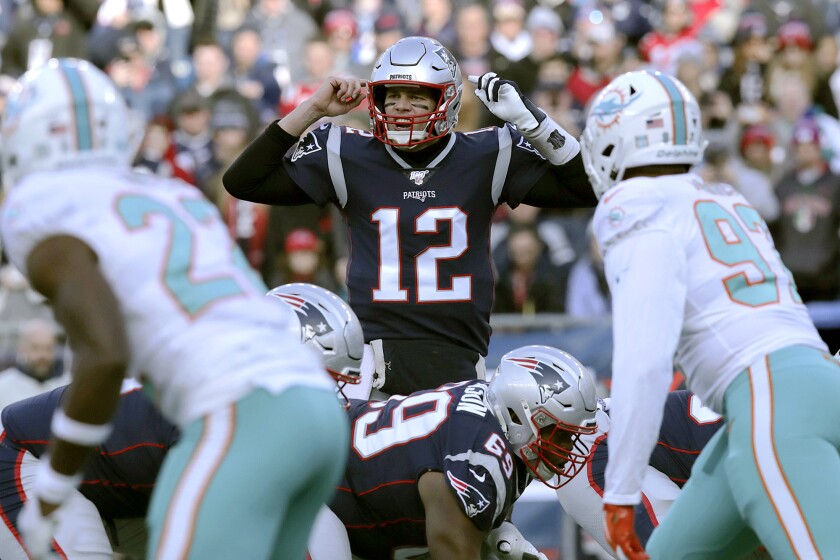 Column: Chargers will have a new quarterback in 2020 and his name will be ... Tom Brady?

1. Tom Brady will be the starting quarterback of the Chargers.Philip Rivers’ emotional news conference Sunday will be his last as the Chargers quarterback. The team needs to make a big splash to move the needle in L.A. and signing Brady as a free agent would be a tidal wave.

3. The Dodgers will lose in the World Series.Going into the offseason, the Dodgers targeted Gerrit Cole but came up empty. They have enough talent to win the NL West for an eighth straight season, but not enough to win their first World Series since 1988.

4. The Lakers will beat the Clippers in the first postseason “Hallway Series.”The Lakers and Clippers have shared Staples Center for 20 years but they’ve never met in the postseason. That will change in the Western Conference finals where the Lakers’ size will be too much for the Clippers to overcome in a classic seven-game series.

5. The Rams will return to the playoffs.Sean McVay missed the postseason for the first time in his three seasons as coach but the Rams easily could have been 12-4 instead of 9-7. The Rams will shore up their issues on the offensive line, bring in a new defensive coordinator and get back on track.

7. The Galaxy will fail to replace Zlatan Ibrahimovic.The timing of Ibrahimovic’s departure couldn’t have been worse for the Galaxy as LAFC continues to make its mark on the city. No matter who the team brings in, they won’t have the same star power, personality and charisma of Ibrahimovic.

8. Chip Kelly will lead UCLA to a bowl game.After going 3-9 and 4-8 in his first two seasons as UCLA’s football coach, Kelly will continue his upward trajectory and lead the Bruins to a 7-5 regular-season record and a bowl game in 2020.

9. The Sparks will win the WNBA championship.Derek Fisher and Candace Parker have patched up their differences and the quartet of Parker, Nneka Ogwumike, Chiney Ogwumike and Chelsea Gray will enter next season with a collective chip on their shoulder and lead the Sparks to their fourth WNBA championship, tying a league record.

10. Rams fans will like the team’s redesigned uniforms.If you’re a fan of the classic Rams uniforms, chances are you’re not going to be upset when the team unveils its new uniforms next season.

11. LAFC will win the MLS Cup.Despite fielding one of the best teams in MLS history, LAFC fell to the Seattle Sounders in the 2019 conference final. That won’t happen next year as Carlos Vela will lead LAFC to the club’s first MLS championship.

12. Spectrum SportsNet LA and the Pac-12 Network will still not be available on DirecTV.We can probably stop waiting for this to happen. It won’t. Not in 2020, not ever.

13. The Chargers will average over 60,000 in attendance for home games at SoFi Stadium.The Chargers will go from having the most expensive ticket in town to one of the most affordable in 2020. Opposing fans will still make up most of the crowd, but don’t expect to see 25,000 fans in a 70,000-seat stadium.

15. The Lakers will re-sign Anthony Davis.Davis won’t leave Los Angeles as long as LeBron James is with the Lakers. The only real question is whether he will sign a five-year deal or a two-year deal with a third-year option.

16. Joe Maddon will lead the Angels to the postseason.Mike Trout’s postseason drought will come to an end and he will win his first playoff game in Maddon’s first season as manager in Anaheim. The Angels don’t have enough pitching to get out of the division series, but at least Trout will finally win a meaningful game in October.

18. The Las Vegas Raiders will be L.A.’s third NFL team.Just as Los Angeles gets used to having two NFL teams, the Raiders are moving to Las Vegas. That’s only a 45-minute flight or a four-hour drive from L.A., so you can expect many Raiders fans here to take advantage of the short commute.

19. Among teens, Sierra Canyon will be the most popular basketball team in L.A. If you’re a teenager, there’s chance you know more about Bronny James and Zaire Wade than LeBron James and Dwyane Wade. The Sierra Canyon tandem have nearly 6 million combined followers on Instagram. The Clippers’ official team account has 2.7 million.

20. The XFL will be a success.Forget about the comparisons to the AAF. The XFL has the financial backing and television support to make it. Chances are you will watch the Los Angeles Wildcats when their games are broadcast on ABC, Fox, ESPN and FS1 next year.