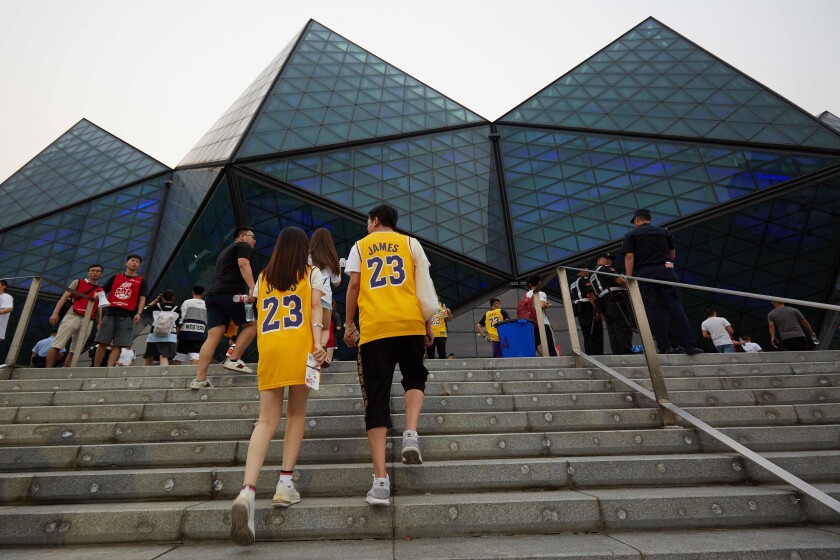 Column: China censoring NBA athletes? No surprise. But what about at home?

It was strange wasn’t it? Watching the Houston Rockets’ James Harden and Russell Westbrook, two of the NBA’s most colorful and outspoken players, sit in silence, staring blankly into space.CNN’s Christina Macfarlane had not asked an unfair question. Given the borderline international incident sparked by a team official, asking two players known for their gift of gab if they were going to be hesitant wading into political waters in the future, wasn’t a “gotcha” moment at all. The “gotcha” came from the cat holding their tongues.

Freedom of speech does not come with freedom from consequences. So, in the wake of a tweet by Rockets general manager Daryl Morey, the league would rather its players just shut up and dribble than say something that could further damage its multibillion-dollar partnership with the most populous nation on the planet. It’s censorship brought to you by China, which is exactly what I alluded to in a recent appearance I made on CNN in regards to the situation.

Question: Do you think, though, there is a benefit to have this connection with China that an American presence in a country such as this and our American values perhaps seep into the culture?

Me: It’s an exchange. … Yes, we are exporting a certain degree of freedom of expression. But we are also importing communist censorship. That is, there’s only going to be so much of our freedom in which China allows in. If you want to do business with them consider the censorship of our own.

This conversation transpired before Macfarlane had the microphone taken from her. This was before the NBA canceled all media news conferences for the remainder of its China swing. This was before Rush Limbaugh took a break from whatever it is that he does to call me a “jock sniffer” for pointing out the very dynamic that played out between the Rockets players and Macfarlane.

It may be shocking for people like Limbaugh to discover something as uniquely American as the NBA could be bullied into silence by the likes of China. But for those of us with a basic understanding of the web draped over the global economy, we may be disappointed but we are certainly not surprised.

My gut tells me Limbaugh is not really shocked either. He’s just being cynical. Much in the way President Trump, in his critique of the response from Golden State Warriors coach Steve Kerr, was being cynical. As well as Secretary of State Michael R. Pompeo, who said ,“The Chinese Communist party is detaining and abusing more than one million Uyghur Muslims in internment camps in Xinjiang, the western region of China. The pages of George Orwell’s 1984 are coming to life there. I wish the NBA would acknowledge that.”

Seriously? Trump has so many of his products made in China, Orwell would’ve called the example overkill. And Pompeo knows this. He was just using his platform as a defender of democracy to take a swing at a league with players who utilize their 1st Amendment rights to criticize the policies of the administration he’s a part of.

Why is it when athletes speak out on domestic issues of which they have first-hand knowledge, such as an unjust criminal justice system, our government officials want them to stick to sports; but those same officials want to attack them for not speaking out on the protests in Hong Kong?

The partnership between the league and China comes with financial implications that directly impact the players’ lives, but systemic racism also has a direct impact. Trump, Pompeo, et al are not criticizing the NBA because it is bastardizing American values. They are doing so out of pettiness, and the motive behind such rhetoric is fairly transparent.

NFL owners such as Stephen Ross and Robert Kraft took a significant PR hit for not only keeping Colin Kaepernick out of the league but fund-raising for the man who was instrumental in distorting the message behind his protest. The NBA had been fairly vocal in its criticism of how the administration handled the Kaepernick controversy. So when the scenario flipped, the door swung open for cattiness and revenge.

But the Oval Office isn’t supposed to double as the set for the “Real Housewives of D.C.” And it certainly isn’t supposed to advocate for censorship, which is exactly what it was doing when, in September 2017, President Trump tweeted, “If NFL fans refuse to go to games until players stop disrespecting our Flag & Country, you will see change take place fast. Fire or suspend!”

So yeah, the NBA has proven to be as beholden to the almighty dollar as any of the other professional sports leagues. And it wasn’t the most powerful display of courage to watch the league and some of its stars opt not to jeopardize the money involved. But that doesn’t mean players and coaches should be silent on issues they do feel comfortable speaking about.

China may be able to manipulate what the NBA can and can’t say, but elected and appointed figures in this country should not use that kind of leverage.