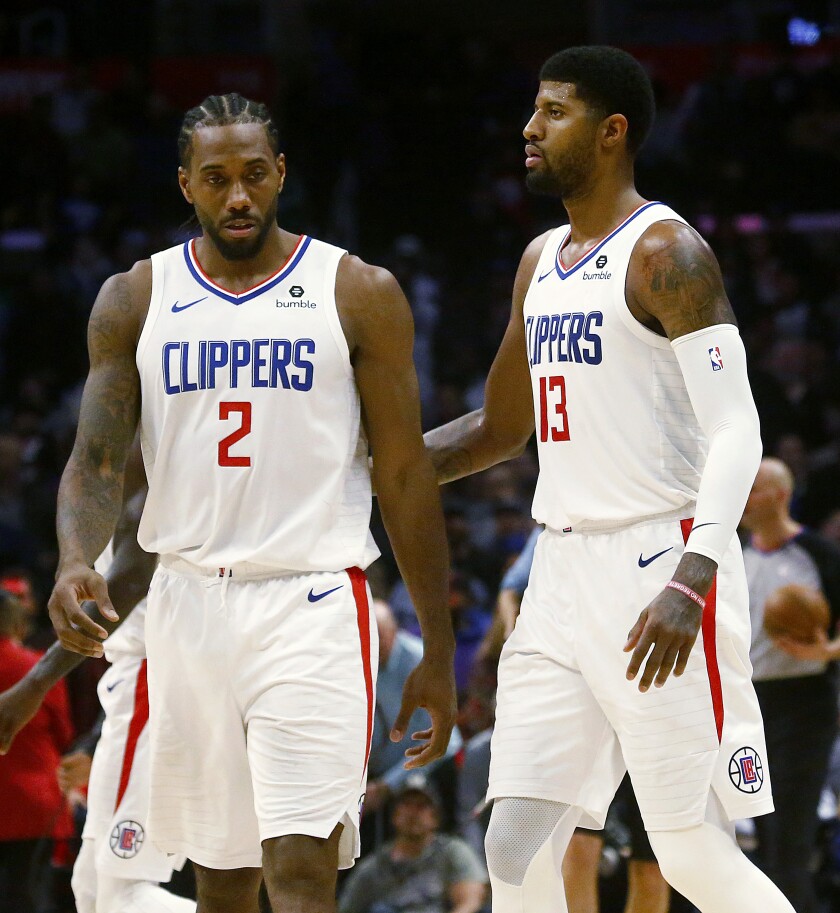 Column: Clippers’ Kawhi Leonard and Paul George have promise, as does the season

The first game that Paul George and Kawhi Leonard played together as Clippers is worth remembering and savoring, but not simply because the dynamic duo’s health finally aligned and allowed them to take the court together in the team’s 15th game.

Wednesday was the night the Clippers grew up, the night the team that prided itself on its junkyard dog mentality and ability to win without superstars in its lineup learned how to rely on both its fire and its finesse in a thrilling fourth-quarter performance and rally for a 107-104 overtime victory over the East-leading Boston Celtics.

“Whew,” coach Doc Rivers said, his posture and face betraying his physical and emotional exhaustion. “It was beautiful.”

In their first game, Leonard and George didn’t produce the magical, parting-of-the-waters moment Clippers fans might have anticipated would occur when they played together. Kept apart by injuries — George sat out the first 11 games while he recovered from surgery on both shoulders and Leonard had sat out the previous three games because of a knee contusion — they wrote a rough first draft for a script the Clippers hope will later evolve to feature an unstoppable pair leading them at both ends of the court.

As it turned out, scrappy, ferocious Patrick Beverley was the Clippers’ soul Wednesday, so much so that the team awarded him the game ball.

“I didn’t know we were giving game balls but we gave him a game ball,” Rivers said. “I thought he literally, single-handedly willed that game with his rebounding, making plays. He’s from Chicago. He’s a tough kid. He was phenomenal.”

Lou Williams contributed 27 points off the bench, but Leonard and George had their moments in what became an ensemble win.

Leonard finished with 17 points and six rebounds, and blocked a late score-tying attempt by Kemba Walker in nearly 38 minutes; George had 25 points, five rebounds and eight assists, also in nearly 38 minutes. Their first game together was more about expectation management than load management, of experimenting for Rivers and, for Leonard and George, their first chance aside from Wednesday morning’s shootaround to get a read on each other’s timing and tendencies. It’s unfair to expect more after they had no practice time together.

“We won,” Rivers said when asked to evaluate the performances of Leonard and George. “We need a lot of work. You could see that. In transition, I just thought we were so sloppy in transition, and part of it was we were trying to get the ball to guys instead of trying to score. There were times we had direct line drives and instead we were looking across court.”

And times they weren’t looking at each other.

“Clearly, 23 turnovers, we were so sloppy we almost were trying not to get in each other’s way at times. You could kind of feel that,” Rivers said. “But to have the will to still try to win the game when you know you’re not ready yet, against a very, very good basketball team, that was good for us.”

But soon, Leonard and George will become more accustomed to each other and their teammates, more sure of who will be where, and when. Imagine what will happen then.“I can’t wait to watch it, see it,” Rivers said.

Fans who had cheered and held up their cellphones to record the moment when both were introduced in the Clippers starting lineup had their big thrill early in the first quarter, when Leonard set up George for an open three-pointer and a 6-0 Clippers lead. One of them was on the court for nearly the entire first quarter.

In the fourth quarter, Leonard ignited roars with a thunderous dunk over Daniel Theis that cut Boston’s lead to 90-86 with 3 minutes 16 seconds to play, part of the Clippers’ impressive comeback. But George also fell and couldn’t defend the three-point shot by Jayson Tatum that brought Boston even 97-97 in the dying seconds of the fourth quarter.

What works in the Clippers’ favor is that they were 9-5 before Leonard and George played together on Wednesday and they’re 10-5 now, including five games Leonard sat out because of load management or his troublesome knee. They’re in the thick of things, and they’re learning that adding superstars still left room for them to keep their dive-on-the-floor mentality.

The Clippers have time and superstars and their win-at-all-costs mentality, and the best is yet to come with Leonard and George in the house and in the lineup together.