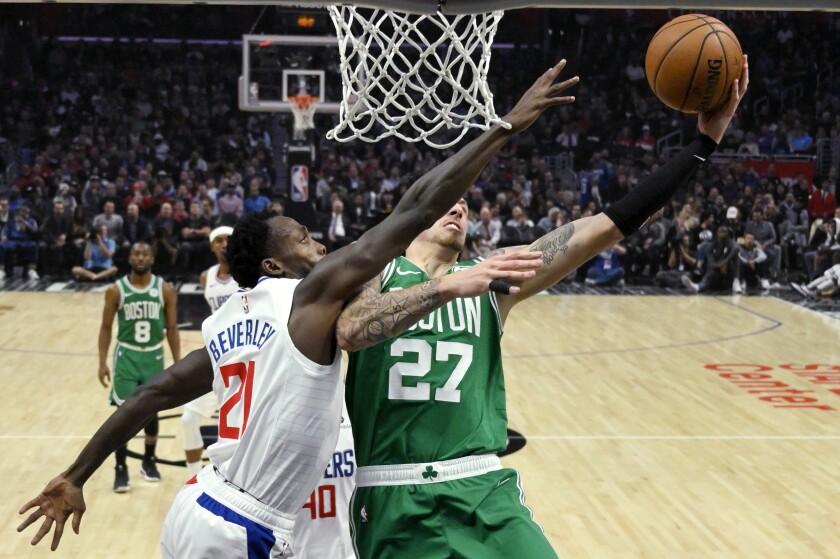 The Clippers won the opening tip Wednesday and executed a perfect offensive possession. All five of their players touched the ball, sticking in no one’s hands. As the shot clock ticked toward expiration, Paul George spotted Kawhi Leonard open behind the three-point line, and his new teammate caught the ball and swished in a wide-open shot.

It was beautiful basketball and almost laughably easy, the Clippers’ two new stars teaming up on their first play in Los Angeles for three points and the best possible start to the Clippers’ new chapter.

But that won’t be this team at its best — two superstar players making it hell on teams because of the ways they can attack. The Clippers aren’t the only team in the NBA with star talent. They’re not even the only team in Staples Center with top-notch talent.

No, the reason why people both on the Clippers staff and around the league believe Leonard and George play on the best team in the NBA is because of what the Clippers were before they even got there.

You could see that as clearly as anything Wednesday in their 107-104 win over Boston. For the Clippers to be the best, they just need to be a superstar version of what they were a year ago. The same goes for Boston — a team that gets stats from their stars and life from a grindy guard, Marcus Smart.

For two teams that want to win — and really, really win in meaningful, sustainable ways — the Celtics need Smart. And the Clippers needed their version of the same thing too.

Sure, seeing George and Leonard play together was a thrill — two of the best to ever wear Clippers’ laundry on the floor together for the very first time. But that wasn’t enough to beat the Celtics. To get Wednesday’s win, the Clippers needed Patrick Beverley to be at his absolute Patrick Beverley-est.

“That game was fun as hell,” he said.

Of course it was — he’s the one who turned things, sparking a 10-point fourth-quarter comeback with an open three and a steal to follow it up. The plays injected life into a crowd that had started to be overtaken by “Let’s go Celtics” chants.

He howled and flexed and yelled at the crowd and begged for more cheering. He was so powerful, he even coaxed the referees into an instant replay – where Beverley’s assertions were quickly proven incorrect. He made huge shots. He finished the game with 16 rebounds. He annoyed the Celtics. He brought jolts of energy to the Clippers.

You can almost draw a line connecting the 16 boards to Beverley’s desire. Only one other player his size (6-foot-1), Rajon Rondo, has had that many rebounds in a game in the last decade. And when Beverley’s playing like he did in the fourth quarter Wednesday — that hard and that effectively — it’s like a Red Bull transfusion for the rest of the Clippers, the kind of minutes from a role player that makes a great team special.

“There are so many dynamics out there, especially with this team — superstar power, All-Star power, grit, grind, defense, offense. You know, I’m just happy to be on a team like this,” Beverley told The Times. “We haven’t even really scratched the surface yet.”

If the Clippers were at their best Wednesday, it won’t be good enough.

Remember Leonard’s debut against the Lakers? He was incredible. Remember George’s first night against New Orleans? Unstoppable. But together Wednesday, it was a little underwhelming.

Just like they did in the first half, they opened the third quarter with an easy look for Leonard set up by George. But largely, offense was a struggle. Leonard made only 7-of-20 from the field and 3-of-10 from deep. George had his “worst” shooting game as a Clipper, hitting only 8-of-18.

“It’s pretty much just finding each other’s spots and knowing the plays. It’s still tough, we’re both kind of on a minutes restriction, so it’s hard to get a flow with one another,” Leonard said. “Just repetition. That’s what we need right now.”

What the Clippers don’t need? A new identity.

What made last year’s team so special, the ability to fight and flail as hard as someone who’s being held underwater, didn’t come out of necessity — even if the Clippers absolutely needed it to win games. No, that came out of character — it’s simply who players like Beverley, Lou Williams and Montrezl Harrell are.

They don’t know how to do it other ways. And the new guys — the stars who finally teamed up Wednesday night — are wise to it too.

“We need everybody,” George said. “This is not a two-headed monster.”