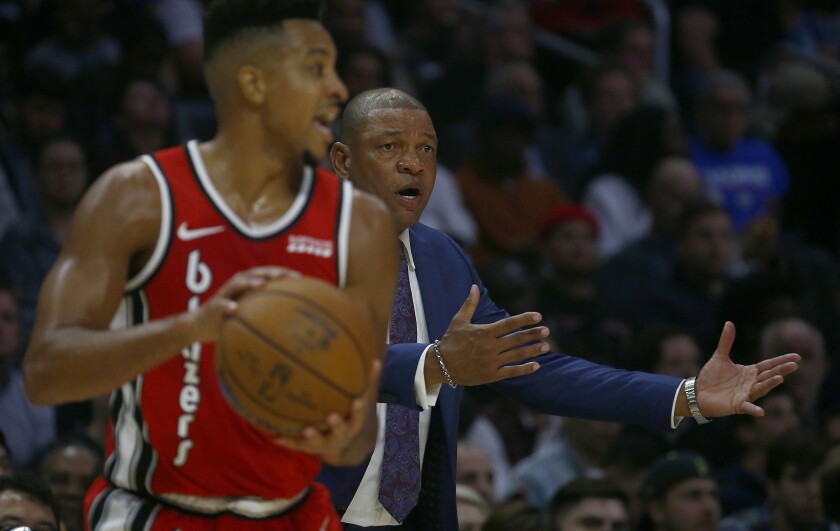 Column: Clippers coach Doc Rivers at a loss for words over load management

When there’s been trouble — whether it was Donald Sterling’s racist rantings to locker room rifts between stars to blockbuster trades and rebuilds — Clippers coach Doc Rivers has been the organization’s voice. He’s the man who can navigate anything with his words and charm, a person with a knack for the right words at the right time.

But after years of relying on their coach to make sense of everything that’s plagued the Clippers, the team and their coach are finally in a position that he either can’t — or doesn’t want to — talk his way out of.

Thursday, the NBA fined the Clippers $50,000 for their handling of Kawhi Leonard’s much-discussed load management.

The fine is a reminder of the lengths the Clippers are willing to go to keep Leonard happy and protected in his new organization. And it even kept Rivers, who normally will talk about anything, quiet.

“I’m not getting into it,” Rivers said before the Clippers’ 107-101 victory over Portland.

That’s not what happened Wednesday night, though, when Rivers tried to explain the Clippers’ reasoning for sitting Leonard against the Milwaukee Bucks.

“He feels great,” Rivers said Wednesday. “But he feels great because of what we’ve been doing, you know. We’re just going to continue to do it. There’s no concern here. But we want to make sure. I think Kawhi made a statement that he’s never felt better. It’s our job to make sure he stays that way. That’s important. But he played a lot of minutes in the playoffs last year. So, it’s not, uh, a health thing really. It is in some ways. We want him to just keep feeling better and getting better.”

So the NBA acted.

But the Clippers had their reasons, and a $50,000 fine probably won’t change them.

So it’s reasonable that Leonard, a player who lost almost an entire season because of a mysterious calf injury, wouldn’t want everyone to know what’s going on with his legs. He spends an hour (and sometimes longer) getting treatment postgame, leaving people waiting on him, not because he’s trying to be difficult. (It’s why his quotes don’t show up in the morning newspaper.) He’s doing it because he’s trying to take care of a body that’s failed him before.

And so we shouldn’t be surprised that Rivers, one of the key figures in that free agency, would try his best to protect his player by being, best-case, vague or, worst-case, misleading, about Leonard’s health.

The Clippers’ went to amazing lengths to get Leonard to commit to them this summer.

Leonard pushed his body to incredible distances to win an NBA championship last year, limping his way through the postseason as the weight on his shoulders demanded more effort, more minutes and more production.

And the plan is for him to do it again this spring.

When Leonard’s on the floor, the Clippers can’t protect him. At any moment, like in the first half Thursday, he could find himself involved in a nasty collision. After crashing into Portland center Skal Labissiere, Leonard bounced right back up. This time, it wasn’t a problem.

Off the court, though, Rivers and the Clippers can protect him, even if it means staying quiet. Ideally, there’d be middle ground on this – a way for Rivers to protect Leonard’s privacy while still keeping NBA partners ranging from broadcasters to bettors happy. ‘

There’s got to be a way, right?