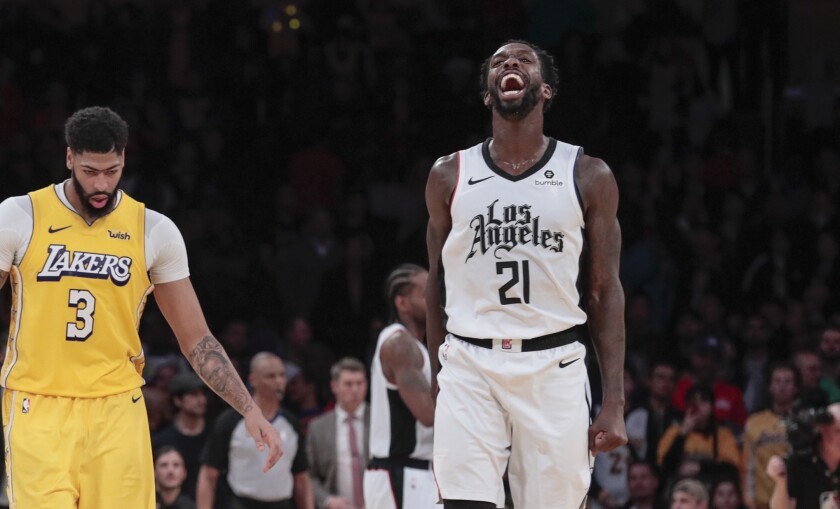 Column: Clippers say win over Lakers is no big deal, but act otherwise

The Clippers insisted that beating the Lakers in a frantically hyped nationally televised Christmas Day matchup meant nothing special in the grand scheme of their season and their championship aspirations, and it was almost possible to believe they meant it.

“It does nothing,” Kawhi Leonard said after scoring a game-high 35 points in the Clippers’ 111-106 victory Wednesday in front of an energized Staples Center crowd that spent most of the fourth quarter on its feet. “It’s one game out of the season.”

Was it only that? Then why was pink-sneakered Patrick Beverley, the defensive standout of the game, jumping up and down on the court and screaming like a kid who had gotten the present he’d dreamed of, and more?

“Just another game. Just fortunate to play on Christmas,” Beverley said, for once showing little emotion.

Surely it felt good to defeat the Lakers, it was suggested.

“It’s our second time beating them,” Beverley said, but stopped there.

The Clippers’ deliberate calmness extended to coach Doc Rivers, who praised both teams’ competitiveness in what played out as an entertaining and intense contest.

“It’s just another game because you don’t get anything for this,” he said. “There’s no trophy and it’s just a win and a win against a Western Conference opponent, which is good.”

“We can beat the best,” Paul George said when asked what he and his Clippers teammates had learned about themselves from this game, and that lesson could mean a lot later.

As in the teams’ first meeting, in the season opener, they were tied after three quarters Wednesday. And again, the Clippers took ownership of the final minutes.

“We didn’t flinch,” Rivers said. “We just kind of hung in there and it almost felt like we were biding our time and trying to make a run. That’s something you have to have when things aren’t going great for you — you just have to hang in there and I thought we did that tonight.”

At halftime players decided they had to change the tide themselves. It helped, too, that they had every player healthy and available for the first time this season. They played like a team that’s figuring things out, as they’ve been saying all along, and a team that could be exceptionally good if it continues to evolve and avoid major injuries.

“We communicated. It was a collective mind-set as a group,” George said of their halftime talk. “But yeah, we just needed to attack, to go downhill and keep our focus on the floor and not distractions, not on the officiating. We just kept everything together. And we were poised down the stretch.”

They won on a rare occasion that their bench was outscored: Kyle Kuzma contributed 25 points to the Lakers’ 49-36 edge in that category, but the Lakers couldn’t match the Clippers’ defensive intensity or poise.

With the loss came a lesson for the Lakers.

“There’s obvious ways that we can get better — by not fouling. They had 23 free throws in the second half to our eight,” Vogel said.

“We’ve got to play the game without fouling more because of the impact on the other end. We don’t want to give them the free-throw attempts first but we’ve got to make sure we’re staying in rhythm offensively.”

Lakers guard Rajon Rondo said he did not put any weight on the result Wednesday and whether it will be significant in April or May.

“If we see them again it will be another battle and then obviously in the playoffs,” Rondo said. “It’s hard to talk about. We’ve got to get through so many different matchups and we actually have to get there first. I don’t want to think about it too much.”

But for the Clippers, the game was worth remembering and savoring. Not worth gloating over, because the schedule is too unforgiving, but worth appreciating as a potential steppingstone toward something bigger, toward scaling heights they’ve never come close to climbing.