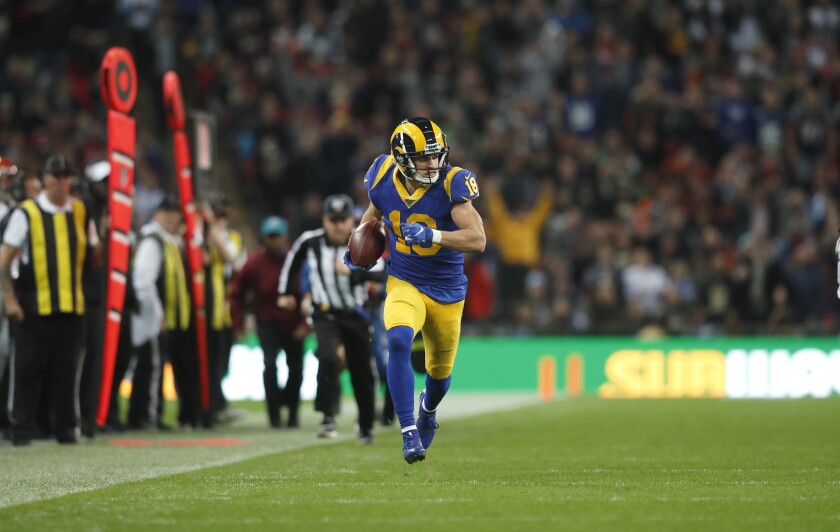 Wembley Stadium felt like a draw-it-up-in-the-dirt playground Sunday on a play that instantly qualified for the Rams’ all-time highlight video.

With the winless Cincinnati Bengals hanging tough in a 10-10 game, the Rams took the wrapper off a trick play they had been practicing for weeks.

Jared Goff took the snap and handed off to Kupp, who handed off to Robert Woods coming from the other direction. Woods then tossed back to Goff, who threw the double-reverse pass deep down the right sideline to Kupp.

Call it a three-flicker, and one made all the more effective when cornerback B.W. Webb fell in his coverage of Kupp and desperately tried to climb to his feet as the receiver made the catch and blew past him for a 65-yard touchdown.

“We’ve been working that play for a while,” Kupp said. “You never know when it’s going to get called. We rep plays for a few weeks and prepare for whenever it’s going to get dialed up. We got an interesting look from the defense … and on the fly you can make good things happen.”

Kupp, who slipped to the third round in the 2017 draft after covering 40 yards in a ho-hum 4.62 seconds at the combine, has been plenty fast in the pros. Amazingly, he said that since he has recovered from the torn ACL that sidelined him last season, he’s actually faster by 1.5 to 2 mph.

The Bengals certainly couldn’t handle him. All they got were armfuls of London fog. Kupp had seven catches for 220 yards, a staggering average of 31.4 yards per reception, in the best performance by a wideout in the 28-game history of the London series.

“What’s the record in the NFL?” Goff said at a news conference.

That’s Flipper Anderson of the Rams, who had 336 yards in 15 catches against New Orleans in 1989.

“We weren’t forcing the ball to him to try to get him a record,” Goff said of Kupp. “But we’re looking up, ‘Dang, he has 220. All right, how many more until the record?’ And of course you’re not forcing anything to him, but it was exciting.”

If Goff was excited, just imagine Kupp’s family watching from the middle of Washington state. They were delirious, watching the yards-after-catch specialist — the kid who put the YAC in Yakima — do what he does best. Kupp’s first four catches, spread over the Rams’ opening two possessions, went for 21, 25, 31 and 23 yards.

By halftime, he had five catches for 165 yards, the most receiving yards in a half for the Rams since Marshall Faulk had 168 in 1999.

“You’re just thinking, ‘My goodness, where is this going to end?’ ” said his father, Craig, a star college quarterback at Pacific Lutheran who had a brief stint as an NFL backup. “I was just thinking, ‘Gosh, I wonder what the Rams record is? Is he going to keep going?’”

Turns out, he did. On the opening possession of the second half, Goff converted on third and 10 with a 40-yard pass down the middle to Kupp, who was double-covered.

“We had poor discipline there, so he made some catches over the middle,” said Bengals coach Zac Taylor, who was assistant receivers coach during Kupp’s rookie season with the Rams and knows him well. “It was really the same concept over and over.”

The Kupp family was watching at the home of Cooper’s grandparents in Yakima, a three-minute drive from the house where the receiver grew up.

“It was really fun, obviously,” Craig said. “Lots of joy in the room. Lots of high-fives. The NFL is so difficult. It’s such a challenge. So when you have a game like that, you’ve got to really enjoy it.”

As Kupp was reminded with his knee injury last season, it can all go away very quickly. It did Sunday for fellow receiver Brandin Cooks, who was helped off the field because of an apparent concussion on the Rams’ third offensive play. Josh Reynolds stepped in and made an impressive contribution: three catches for 73 yards, with a 31-yard touchdown.

“We have all the faith in our receiver room,” Kupp said. “That’s the way we’ve done things. It’s not just three or four guys you see in the game. It’s our whole room. We have a standard, and we judge ourselves within the walls of the Rams facility. We hold ourselves to that standard, challenge each other, and try not to point fingers outside of that, but say how we can do better.”

When he was in college at Eastern Washington, Kupp spent several years as a counselor at the Manning Passing Academy in Louisiana. Brothers Peyton and Eli Manning used to bicker over who got to throw to him during passing exhibitions, with Peyton finally telling all the other quarterbacks, “You can take whatever receivers you want, but Cooper Kupp is mine.”

Now we know why.