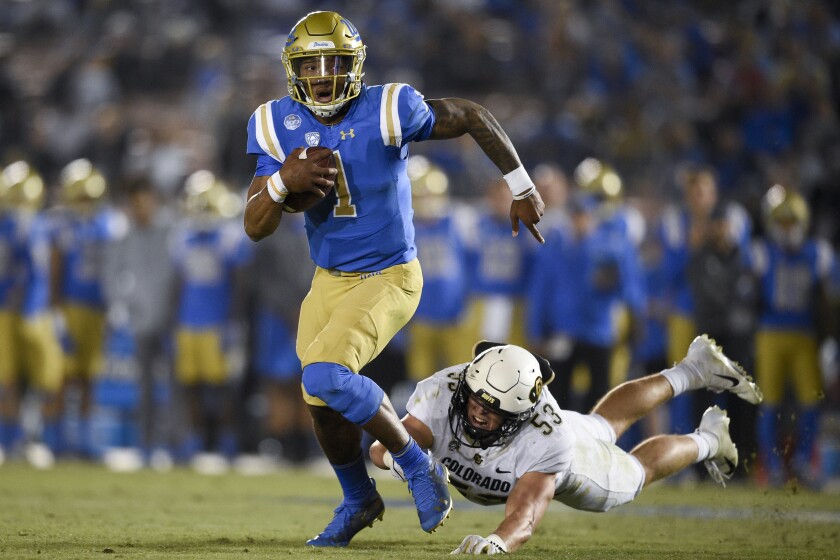 UCLA quarterback Dorian Thompson-Robinson has been earning praise for using his mobility to enhance his game, but one of his most efficient runs against Colorado on Saturday didn’t show up on the scoresheet.

After he hit Ethan Fernea with a pass that turned into a 45-yard touchdown reception in the first quarter, Thompson-Robinson dashed toward the end zone to celebrate the success of the popular former walk-on, joining a cluster of teammates who jumped for sheer joy on a cool and happy night at the Rose Bowl.

Thompson-Robinson’s reaction to his own success on Saturday was more muted, though no one would have begrudged him a few happy leaps after the 31-14 victory over the Buffaloes that, wonder of wonders, kept the Bruins (4-5 overall, 4-2 in Pac-12 Conference play) in contention for the South Division title and a bowl bid after a mistake-filled 1-5 start to the season.

The sophomore from Las Vegas was calm, mature and businesslike on Saturday after he completed 21 of 28 passes — a percentage that would have been fatter if not for a few drops by receivers — and racked up 226 yards while throwing for two touchdowns. He was never rattled, never panicked, always cool.

The kid who committed four turnovers in the Bruins’ season-opening loss to Cincinnati was smooth on Saturday and had only one pass intercepted. After what he called a poor performance against Cincinnati he realized he was rushing things, and he adjusted. Bit by bit, week by week, he has grown. So has his teammates’ confidence in him.

“Truthfully, I feel like we [the defense] played a part, but mainly he did it himself,” defensive back Darnay Holmes said. “He had to look himself in the mirror and make sure he wasn’t cheating himself. Each and every day he came through and acknowledged what his faults were.”

Thompson-Robinson isn’t taking shortcuts. His progress is a product of diligence and has been supported by Kelly every step of the way. Not every performance has been perfect, but he’s more consistent and effective. Teammates feed off his confidence and he, in turn, feeds off theirs.

“Dorian, he’s awesome,” said running back Joshua Kelley, who gained 126 yards in 23 carries and scored two touchdowns. “He’s super-talented. We kind of figured that out Day 1 when he first came here. He checks a lot of the boxes of playing quarterback. He started using his legs, too, which is great.

“He’s maturing over these past few weeks, and he’s definitely a lot more comfortable. This is great because he works extremely hard, and it’s awesome to finally see him come out there and just start throwing those dimes. He has the talent. He has the gift. So we support him fully. It’s great to see a guy like that do well.”

It also helps that the Bruins’ offense has become more diversified. They had 200 rushing yards on Saturday, the fifth straight game they had 200 or more yards on the ground. The defense did its job, too, surrendering the fewest points in the Kelly era and fewest since they gave up nine to Utah on Nov. 21, 2015. They have more wins this season than they did last year, when a dismal 3-9 performance had fans and alumni ready to usher Kelly out the door.

Thompson-Robinson stands at the center of this slow but sure resurgence, as he showed again on Saturday, but he deflected the credit.

“It all goes to coach Kelly and him putting me in position to make those throws and stuff like that,” Thompson-Robinson said. “My receivers did a great job. My line did a great job blocking. So I just did my job and handed off the ball.”

It’s a little more than that, though he wouldn’t say so.

“I think me and coach Kelly’s relationship has grown a lot, just him as a play caller puts me in the best position to win,” Thompson-Robinson said. “He has me go out there and I don’t have to think a whole bunch, so I just kind of go out there and play.”

Kelly said he’s most pleased by Thompson’s throwing accuracy and ability to keep plays alive with his running ability. “The neat thing about Dorian is you just keep seeing him grow each week,” Kelly said.

Holmes, sitting beside teammate Krys Barnes at a postgame news conference, said he believes Thompson-Robinson has more to grow and to give.

And now, after that terrible start, Thompson-Robinson and the Bruins have something to play for when they face Utah on Nov. 16 after a bye week. Imagine that — though Thompson-Robinson said he’s not looking that far ahead.

“I’m just focused on resting my body, but it is a good feeling knowing that you’re in control of your own destiny and being able to make something out of it,” he said. “Now we just have to put the work in and get it done.”

He spoke calmly, but maybe there’s a leap of joy or two in his future.