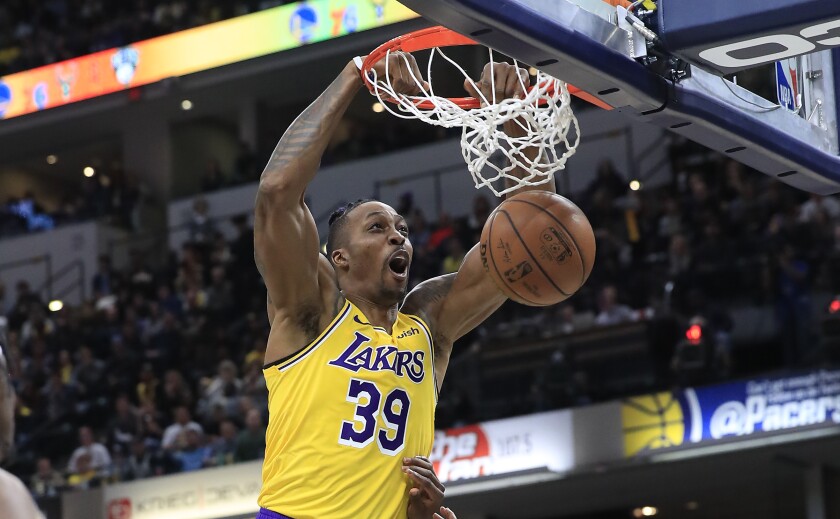 Column: Dwight Howard’s renaissance with the Lakers has marked an improbable comeback

The official Lakers Team Store located across the street from their training facility in El Segundo has a jersey for just about every player on the roster.

On one side of the store there is a rack of jerseys for Kentavious Caldwell-Pope, Avery Bradley, Troy Daniels and JaVale McGee. On the other end, Jared Dudley, Rajon Rondo, Quinn Cook and Kyle Kuzma.

A new shipment of Alex Caruso jerseys was expected to come in Tuesday.

There’s a devoted section for LeBron James and Anthony Davis, and another for Lakers greats such as Kobe Bryant, Shaquille O’Neal, Magic Johnson and Kareem Abdul-Jabbar.

There was a jersey for just about every player except the one I sought.

“Excuse me, do you have a Dwight Howard jersey?” I asked the man behind the counter.

Never thought I’d be walking around the Lakers Team Store in search of a Howard jersey back in August when he signed but my cousin is a Howard fan, and his birthday is coming up, so the search began for what is apparently the most elusive jersey in town.

Howard’s jersey also was not available at the Team LA Store at Staples Center, where I was instructed to go to a website to personalize a jersey with Howard’s name and number — as if he wasn’t a key player on the team with the best record in the Western Conference.

It’s common for a team not to sell the jersey of a player on a non-guaranteed contract. Both stores said they expected to get a shipment of Howard jerseys and shirts on Friday, which is also the day Howard’s one-year contract becomes guaranteed.

Howard was arguably the most vilified former Laker when he left the team in 2013. His No. 12 jersey — which former Lakers general manager Mitch Kupchak had told Howard would one day be retired alongside Wilt Chamberlain, O’Neal and Abdul-Jabbar — was worth as much as the embarrassing “#StayD12” billboards the team put up around town before Howard bolted to Houston.

Howard might look odd wearing No. 39, which is a more appropriate uniform number for an NFL nickel back than an NBA center, but he needed a clean slate in Los Angeles. Howard is the first player in Lakers history to wear No. 39 and the only player with that number in the league this season. In fact, no NBA player wore that number the previous two seasons, either.

Howard’s renaissance during his second act with the Lakers has been one of the more improbable comeback stories in recent NBA history. If Lakers center DeMarcus Cousins had not torn his ACL in August, there’s a chance Howard would be out of the league.

After playing just nine games last season with Washington, he has become a major contributor off the bench for the Lakers, his fifth team in five seasons. He’s seventh on the team in scoring (7.1 per game), and third in rebounds (6.8) and blocks (1.4).

It’s sometimes easy to forget how good Howard was at the beginning of his career. He was an eight-time NBA all-star, five-time All-NBA first team member and three-time NBA Defensive Player of the Year winner before he turned 30. He recently became one of six players — along with Abdul-Jabbar, Robert Parish, Kevin Garnett and Tim Duncan — to post 13,000 points, 2,000 blocks and 1,000 steals.

He always had the talent to be one of the best players in the league, but had the fun-loving personality of a hype man on the bench, which didn’t always mesh for observers. This time his role matches his personality and it’s obvious how much fun he’s having. He can be himself without the pressure of being the face of a franchise or living up to lofty expectations.

Lakers fans wanted Howard to be the next Chamberlain, Abdul-Jabbar or O’Neal when he first arrived. It was a fair expectation given what he had accomplished but he has improbably morphed from one of the most hated Laker to a fan favorite.

His resurgence might also include a return to the NBA Slam Dunk contest, which he won in 2008. He won’t be named an NBA all-star this season but when the first returns of all-star voting came back last week, he was 10th in the Western Conference among frontcourt players, just behind Brandon Ingram.

The next step in Howard’s comeback story should come this week when his contract becomes fully guaranteed and maybe, just maybe, his jersey will be available at the team store.