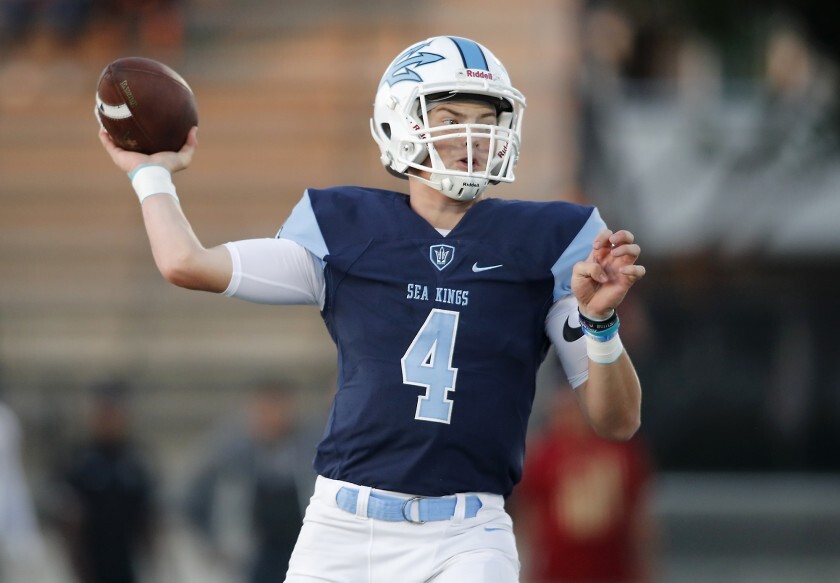 There isn’t a better night to watch high school football in Southern California than Friday night. Not even the Southern Section finals scheduled for Nov. 29 and 30 will have the kind of fan-pleasing matchups set for this weekend. It’s as if the football gods decided to make Christmas happen this year on Oct. 25.

Tickets for Santa Ana Mater Dei (8-0) at Bellflower St. John Bosco (8-0) were sold out less than 24 hours after 3,000 went on sale last Friday night. One fan was offering his ticket for $200 on Craigslist. Seating capacity is 5,000. Fox Sports West will provide a national telecast. Fans of Alabama and Clemson will get to watch their future quarterbacks in Bryce Young and DJ Uiagalelei. But that’s only one of many intriguing matchups.

Let me offer you a variety of options:

Last season, Mission Viejo came into this matchup 4-4 (the losses were by forfeit) and was coming off a week off but still lost to San Clemente 21-20. Coach Chad Johnson said he has taken a different approach during this time during the team’s week off, treating it as if the Diablos were preparing for a game. Players wore helmets all last week and coaches worked on a game plan.

The game comes down to whether the Tritons can handle Mission Viejo’s formidable defensive line, led by Lance Keneley, who has eight sacks and 13 tackles for losses. San Clemente quarterback-cornerback Nick Billoups will be one of the best athletes on the field.

“Coach Johnson has done an incredible job ramping up the intensity,” Keneley said.

Grace Brethren might be the most formidable team when it comes to running the ball. Julien Stokes has surpassed 1,000 yards rushing and Josh Henderson is a solid No. 2 back. There’s also receiver Nate Bennett, who Sierra Canyon coach Jon Ellinghouse calls “probably the best player we’ve gone against all year. ... We have to find a way to get them off the field and create some turnovers.”

Sierra Canyon is preparing for 2020, when it’s expected to take a shot at the top teams in Division 1. The Trailblazers’ young players might be a year ahead of schedule. Beware of quarterback Chayden Peery, running back JD Sumlin and receiver DJ Harvey.

The Marmonte League championship is on the line, but even more important, Calabasas could clinch a spot in the Division 1 playoffs and a possible meeting with Mater Dei or St. John Bosco in the first round.

Coach Chris Claiborne is all for it.

“You got dudes who are supposed to be college guys,” he said. “I’m not hoping we’re not D1.”

Calabasas quarterback Jaden Casey changed his commitment from Fresno State to California. He’s in charge of a high-powered offense with top receivers and top running backs. Oaks Christian is finally healthy with the return of running back Mister Williams and receiver Bryce Farrell.

The Battle of the Bay is for bragging rights in Newport Beach. Corona del Mar coach Dan O’Shea remembers that one year about 500 Newport Harbor students emptied the stands to remind him who won.

Corona del Mar is ranked No. 1 in Division 3 and features one of the most prolific offenses with quarterback Ethan Garbers, and receivers John Humphreys, Bradley Schlom and Mark Redman.

“The whole school is counting on you to beat the rival team,” Garbers said.

The Lancers can wrap up the Mission League title behind running back Damien Moore. But Notre Dame, despite some injuries, is a dangerous opponent. Sophomore quarterback Zachary Siskowic is a left-hander with increasing confidence, and the defense, led by linebacker Jacob Moore, is tough to score on.

In the modern recruiting rankings era, this Friday will be the first ever matchup featuring quarterbacks ranked No. 1 and 2 in the country, here's a closer look at St. John Bosco's DJ Uiagalelei and Mater Dei's Bryce Young https://t.co/wvXkg1ZXGK pic.twitter.com/I7CKtjcERq

Some Mater Dei fans think this will be an easy game, pointing to St. John Bosco barely beating Anaheim Servite 27-26. The fact is Braves coaches have been preparing for this game since losing to Mater Dei in last year’s Division 1 final. They’ll have new wrinkles and new strategies plus plenty of motivation.

As good as the quarterbacks are, it comes down to the play on the offensive and defensive lines. In 2016, lineman Wyatt Davis led St. John Bosco to victory. In 2017, Mater Dei had the best offensive line in California. In 2018, Mater Dei’s offensive line came through in the final. Watch to see the effectiveness of Drake Metcalf of St. John Bosco and Myles Murao of Mater Dei, headed to Stanford and Washington, respectively. Both are four-year players and both intend to leave the field victorious.