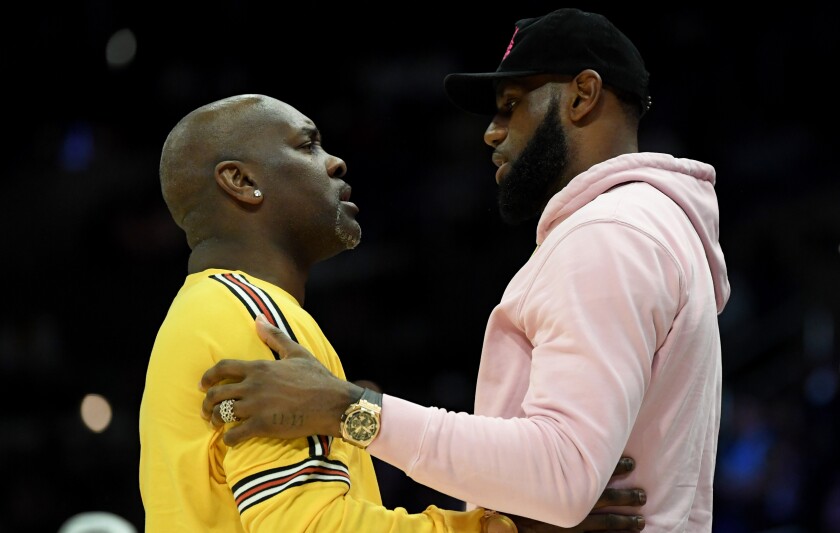 LeBron James recently passed Gary Payton and Isiah Thomas to move up to eighth among the NBA’s all-time assist leaders. He is now within striking distance of Magic Johnson, Oscar Robertson and Chris Paul.

Payton isn’t surprised that James, billed as a forward most of his career, has compiled enough assists to put him in the same company as some of the greatest point guards in NBA history.

“What he’s doing right now is he’s playing just like Magic Johnson,” Payton said. “He’s doing the same exact thing Magic did. He’s doing everything. He can see the floor. He’s passing. He’s shooting the basketball well. He’s doing the things he has to to help his team win. He’s Magic.”

“He has been going deep in the playoffs most of his career,” Payton said. “He’s played (239) playoff games. That’s almost three extra seasons. Do I think he will pass Kareem? I don’t think so. That’s a tall task. He needs [nearly] 5,000 more points.

“He’s already in his 17th season. Is he going to be putting up these same numbers in his 20th season? I hope he can do it but in reality, it probably won’t happen, not just because of LeBron but because [Anthony Davis] is going to become the No. 1 option on the Lakers and the one scoring more points. I hope it happens but Father Time is undefeated.”

As much as Payton likes the Lakers, he slightly favors the Clippers in a seven-game playoff series. Not just because of their all-star tandem of Kawhi Leonard and Paul George but because of their bench and a feisty point guard he said is the closest thing to his clone in the NBA right now.

“Patrick Beverley is one of my favorites,” Payton said. “What he does is he brings a lot of energy. When that second unit comes in with Lou Williams and Montrzel Harrell, he motivates them and pumps them up. When he gets going and he gets in your ear, he’s like a gnat you can’t kill. You keep swatting at the gnat but he’s still there, bugging you.

“That’s what you want with a guy like that and he makes things happen. He gets a big steal or a big rebound or a big block. That’s what I like about him. He reminds me of myself.”

Payton’s son, Gary Payton II, recently signed with the Washington Wizards for the rest of the season and is averaging 6.2 points, 4 rebounds and 2.6 assists. He had a stint with the Lakers at the end of the 2017-18 season and posted a career-high 25 points and 12 rebounds against the Clippers in the regular season finale. He began this season with the South Bay Lakers before signing with the Wizards last month.

“I’ve watched my son go through his ups and down, but it’s about being in the right situation with the right team and the right coach,” Payton said. “I think he has that now in Washington with Scott Brooks. Now that he has this guaranteed contract, he can’t forget what got him there, and he won’t.”

Payton and his son both had short stints with the Lakers, although Payton’s time in L.A. remains perhaps the biggest regret of his career. Not because he decided to sign with the Lakers or because they lost to the Detroit Pistons in the 2004 NBA Finals, but because the team was broken up after just one season.

“I think if Karl Malone hadn’t have gotten hurt we would’ve been fine,” Payton said. “If we would’ve been at full strength against the Detroit Pistons that would’ve been a different series. I still think if we would’ve stayed together and come back the next year, we could’ve won it all but Kobe didn’t want that. Kobe wanted his own team. He wanted to prove he could win a championship without Shaq. It took him a couple years, but he did it. It’s just disappointing that we broke it up after one year. I really thought we’d be together for two to three years and win a couple championships.”